Welcome back to Pocket Gamer's round-up of the latest iPhone, iPod touch, and iPad mid-week releases.

As you all probably know by now, we produce this article each week because we're simply too busy to bring you a story on every single new game that hits the App Store.

These games have recently hit Apple's New Zealand outlet, meaning they should be available to download in the UK and US from around midnight this evening.

The evil Captain Cork has sabotaged the world's vending machines leaving millions of thirsty punters without a sugary drink. Playing as Mr. Pop, you have to save the world's drinks supply in this fast-paced platformer.

There are 45 levels spread across three unique worlds to tackle - all of which are littered with hazards, obstacles, enemies, and boss fights.

Escape from Age of Monsters is an endless-running title that features hand-drawn artwork, a whole bunch of baddies, and lots of opportunities to punch things.

This title, which was created by the Emmy award-winning producer of The Batman cartoon series, features Game Center leaderboards and achievements, which allow you to compete against your buddies for bragging rights.

Spellsword is a retro-inspired survival game that follows an unlikely hero in his attempts to unleash the power of the newly found spellsword.

Your adventures take place across 60 missions and nine endless arenas. RPG elements allow you to unlock upgrades for your character.

Your aim in this game is to help a clumsy raccoon escape from his pursuers, who range from gun-toting hunters to ale-swigging bikers.

You do this across 30 obstacle-filled levels by sliding, jumping, and accelerating to dodge and avoid the many hazards that litter your escape route.

In Ski Safari, you take on the role of a young bloke named Sven, who has to escape a relentless avalanche and make it off a treacherous mountain in one piece.

Luckily, you can use a wide variety of animals, such as eagles and yetis, to increase your chances of survival.

According to its App Store description, Juice 'Em Up! 2 is a free-to-play version of Fruit Juice Tycoon 2, which tasks you with creating enough juice to serve thirsty customers.

Basically, you have to play a match-three game to squeeze a variety of juices, then make a hop over to the time-management genre in order to serve punters. 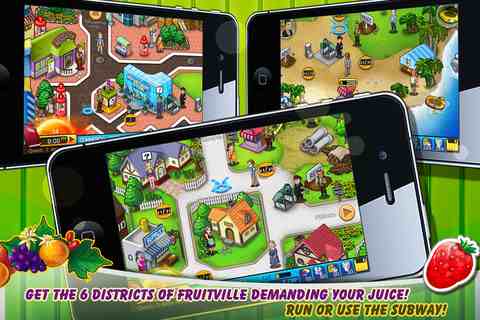 Ballistic SE
By Radiangames - buy for iPhone and iPad

Ballistic Special Edition is a wave-based twin-stick shooter in which you fend off hundreds of deadly enemies.

Thankfully, you can unlock upgrades and enhancements that boost your firepower, and slow down time in order to improve your chances of survival.

This is a strange title, to say the least. Your mission is to fire a cat between various cannons in order to rescue the Skyfish, who are being imprisoned in bubbles by the venomous Evil Emu.

Don't worry, though: your kitty's spark-suit houses a bunch of handy power-ups, which make your job a helluva lot easier.