Which mobile infantry should you deploy?

Regardless of how meek and idle we are, we’ve all fantasised about what it would be like to call the shots on a grand scale.

Whether we’re sat in a gridlocked city dreaming up the perfect congestion-free layout, or simply plotting a destructive military strike to level it completely, there’s something to be said for planning and executing a large-scale operation.

Which probably explains the draw of the mobile strategy game. It’s surprising how deep the best of them can be, given the relative limitations in control and processing power of your average mobile phone. At the same time, the more considered pace often suits the platform to perfection.

Here’s a list of some of our favourite mobile strategy games. 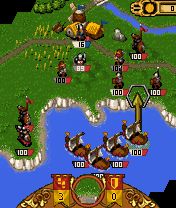 The game AD 1066 most calls to mind is the GBA classic Advance Wars. Those who know that game and the level of esteem it’s held in will recognise what a ringing endorsement this is.

Showing you a simplified view of the battlefield and tasking you with manoeuvring your forces into position one unit at a time.

Of course, with a name like 1066 you might have guessed that the game has a historical grounding. You’re cast in the role of the invading (and soon to be Anglicised) Saxons in the lead-up to the famous Battle of Hastings.

Having events grounded in reality provides an interesting twist to proceedings, and results in a supremely accessible strategy title. 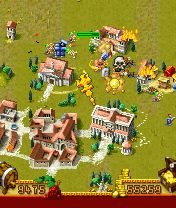 This strategy malarkey is all very well, but it’s all a bit dry and earnest, isn’t it? There aren’t many laughs to be found in empire building.

That’s where Romans & Barbarians comes in. Thanks to a silly story and light-hearted tone that calls to mind the adventures of Asterix, it takes its place on this list as the lighter alternative.

It’s still got its strategic chops, though, with a finely structured campaign of construction, expansion and defence in place. You’ll need to plant vineyards to keep your workers happy, and plant well-placed watchtowers in amongst the villas and coliseums.

If you like your mobile games to come with a smile, Romans & Barbarians should be your strategy title of choice. 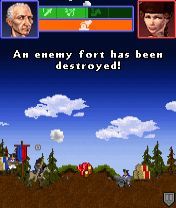 Rather than attempting the impossible task of converting one of the most complex games ever into a mobile experience, Connect 2 Media has wisely adopted a different angle - a two dimensional one.

Each mission takes place on a horizontally-scrolling 2D map, with your city at one end and your opponent's at the other. The aim is to get one of your infantry units into your enemy's base, thus bringing it under your jurisdiction.

By stripping away the stats, C2M has created a compelling mixture of action, resource management and real time strategy that maintains the essence of the series while fitting perfectly on mobile phone. 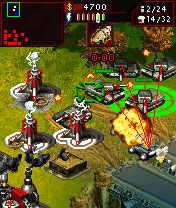 By far the most combat-heavy game on this list, Command & Conquer: Red Alert strips back the resource gathering side of things to a bare minimum, leaving you to focus on constructing and commanding a formidable war machine.

Starting you off with just a single unit and a simple infiltration mission, Red Alert gradually ramps up the challenge and the intensity, introducing you to base-building and unit management.

EA has worked around the limitations of the D-pad by giving you instant access to two squads of units, allowing you to switch between the two in an instant.

While Command & Conquer: Red Alert lacks the breadth and depth of the other games on this list, its tactical combat is unquestionably the finest and most sophisticated. 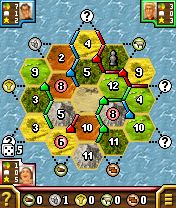 Here’s a game that might seem like an unusual addition to the list - Catan: The First Island is based on a boardgame. This is no digital Game of Life, though, as Catan is the type of tabletop strategy experience that can suck up hundreds of hours.

Remarkably, this mobile version captures the essence of the original beautifully. There are many elements to the game, including the sort of resource gathering found elsewhere on this list.

The boardgame influence rears its head in the form of dice, a race to the finish line, dirty tactics and a handful of luck-based outcomes.

As a result, Catan belies its humble origins to take its place as one of the deepest experiences on mobile. 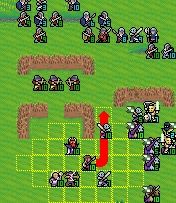 Much like AD 1066, Mobile Battles: Reign of Swords learns from the Advance Wars school of strategy. Thus, we have another combat-heavy turn-based strategy game that favours careful consideration over crude blitz tactics.

You take control of a mediaeval force made up of archers, infantry, cavalry and an assortment of death dealing contraptions. Each battle requires you to move each of your units into strategically advantageous positions, taking advantage of terrain and attacking your enemies if in range.

It’s absorbing stuff and, despite the aging visuals Reign of Swords’s appeal is timeless - which was proved by the release of a well received iPhone sequel earlier in the year. 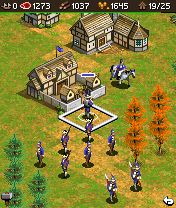 The Age of Empires series is huge on PC, but it’s taken three attempts to successfully distil the experience onto mobile. Glu has done a marvellous job, empowering you to construct a formidable empire and embark on a campaign of world domination.

Each mission starts you off with a barren stretch of land, requiring you to gather resources and build a settlement. From there your options branch into more militaristic areas, as you construct defences and train soldiers.

All of this is built into a superbly intuitive control interface, and thoughtful design decisions such as the ability to pause the game and issue commands from there ensure that Age of Empires III feels perfectly at home on mobile. 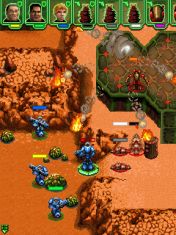 UFO is the only game on this list to take its strategic gameplay inter-planetary, so if you want to out-manoeuvre little green men this is the game for you.

It’s not just here for its novelty value, though - this is turn based combat of the highest order.

You take command of a crack squad of space marines on behalf of Mars-exiled humanity. It’s your task to take on the invading alien forces by making clever use of cover and the various weapons and tactics available to you.

The sense of attachment to your small squad as they advance in experience and potency is remarkable, and is yet another sign that this is one the finest strategy games on mobile. 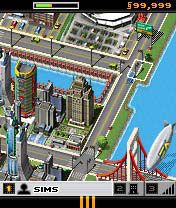 Rather than offer a scaled down version of the original PC experience, Sim City Metropolis does its best to cram a full city-building sim into your mobile.

Despite being an amazingly deep game, though, EA has remembered the unique demands of mobile gaming, so it's split into manageable levels.

With a road network already in place, it’s up to you to build your metropolis, with construction split into three main areas: residential, industrial and amenities. Getting the balance right leads to a happy and productive population, and is a thoroughly absorbing task.

What Sim City Metropolis lacks in instant thrills and the rough and tumble of combat, it more than makes up for in long-term reward. 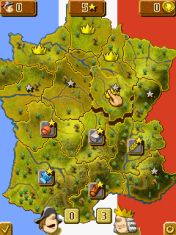 Perhaps the key to Townsmen 6’s success, and the reason it sits atop this prestigious list, is that it’s been made from the ground up as a mobile experience. No hefty rethinks, no streamlining of a complex PC game - just pure mobile strategy heaven.

This latest in the highly acclaimed series is another stride forward for the series. Set during the French Revolution, it sees you expanding your rebellious mob into a formidable fighting force and taking on the pampered aristocracy.

HandyGames excels at wringing maximum depth from a humble mobile phone, and Townsmen 6 represents the peak of its achievements to date.

Manomio secures C64 licenses for Hewson back catalogue on iPhone

Romance of the Three Kingdoms Touch