Arson & Plunder HD for iOS gets medieval on your ass

If you're about to joke that Arson & Plunder sounds like some crime fighting duo then stop - developer Ninja Fever is way ahead of you.

Whilst Arson & Plunder HD does indeed involve a great deal of rampaging and setting things on fire, it's also the name of the two protagonists.

They're unlikely to get their own ITV police procedural show though. Arson is an elf with mystical fire-based powers and Plunder is an orc with decidedly non-mystical blunt trauma abilities.

The two warring races have teamed up to take on us wicked humans. That's the setup for an old school 2D beat-'em-up with a medieval fantasy setting. Think Golden Axe, and you won't be far off the mark. 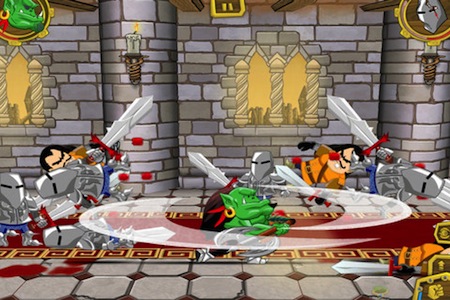 You can flip between controlling Arson and Plunder at will, which should add welcome variety to what can be a rather repetitive genre. Naturally Arson is more adept at ranged combat, whilst Plunder suits a more hands-on approach.

There are 25 missions, five difficulty levels and - of course - plenty of boss fights to keep you occupied, but the highlight has to be the game's lovely 2D artwork.

Arson & Plunder HD is out now on iPhone and iPad for 69p / 99c. There's also a free version [Download] for you to try out.