TiMi Studio Group and Level Infinite have announced the return of one of the most popular collaboration events for Arena of Valor (AoV), the hit 5v5 MOBA on iOS and Android. The acclaimed anime series BLEACH is making a comeback, letting players experience collaborations skins and other exciting in-game goodies during the limited-time crossover.

In Arena of Valor (AoV), players engage in a 5v5 MOBA experience with their online buddies using over a hundred heroes from a wide variety of iconic franchises. Players can also join guilds, duke it out in a Supremacy Blitz and compete in epic battles across different game modes. Each new season brings new rankings and more opportunities for players to climb to the top of the charts for the ultimate bragging rights. 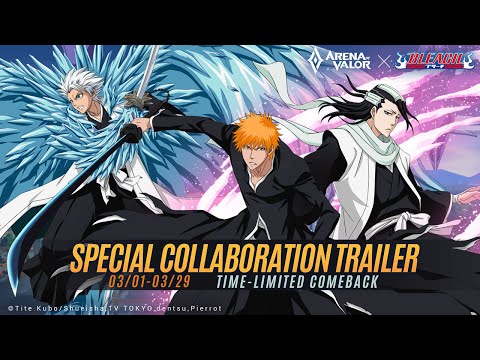 In the latest collab event for the game, players can expect special collaboration skins for five heroes - Lu Bu, Murad, Bright, Lindis and Annette - from now until March 29th. As a skin for Lu Bu, Ichigo Kurosaki will be joining the fray, along with Toshiro Hitsugaya as Bright and Byakuya Kuchiki as Murad. To top it all off, Lindis and Annette will also acquire new BLEACH-themed skins.

If you're keen on joining in on all the festivities during the limited-time crossover, Arena of Valor (AoV) is available to download on the Google Play Store for Android devices and on the iOS App Store. It's a free-to-play game with in-app purchases. You can also have a look at the trailer above to get a feel of the collaboration goodies in store for you this month.

Are you on the lookout for more similar titles that will put your skills to the test on your mobile device? Why not take a gander at our list of the top 10 best MOBA games for Android phones and tablets?

Next Up :
Physics puzzler Slime Labs 2 set for March launch