Arena of Valor’s 5v5 Fest has been going on in full swing with multiple events, challenges, and rewards for everyone. To take the celebrations a level higher, the MOBA is also collaborating with Demon Slayer: Kimestsu no Yaiba. This new crossover will feature exclusive skins from the famous show, more activities, and rewards for fans to collect.

Here’s a little about the show for those who don’t know. Demon Slayer: Kimestsu no Yaiba is a serial adaptation of the magna of the same name, a work of Koyoharu Gotoge. It has been running for three years and explores the life of Tanjiro, who’s been through hell. He saw his family get massacred by demons and his own sister turned into one. This trauma sent Tanjiro down a path to become a demon slayer himself to rescue his younger sister and lay waste to his parents’ killers. A tale filled with tragedy, determination, fighting, and some comedy, Demon Slayer was received with open arms and has become a cultural phenomenon. 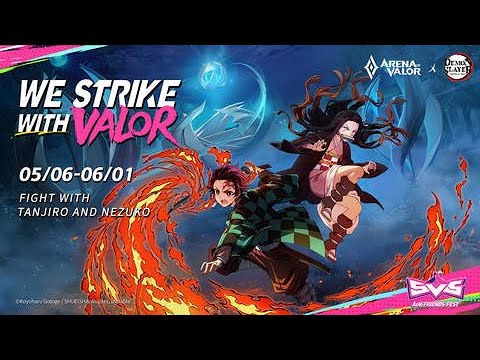 The collaboration event begins in Arena of Valor on May 6th and in the beginning, everyone will be able to play as Keera with the Nezuko skin, with Tanjiro’s skin in the pipeline, set to release on a later date. The skins will be just like their TV show counterparts, with unique powers that will wreak havoc in the AoV world. Additional limited-time events will also be held so that players can earn more rewards. Luck comes into play here too as everyone will receive a dice on completing missions and based on the number, players will take steps. On completing an entire lap, they will be handsomely rewarded with themed goodies like The Butterfly Mansion Girl Alice skin.

Ready to slay some demons? Then, download Arena of Valor now for free on the App Store and Google Play.

Also, check out this month’s redeemable codes for Arena of Valor!
Next Up :
Warcraft Arclight Rumble is an upcoming action strategy game set in the popular Warcraft universe, coming to mobile later this year