I’m always cautious of real time strategy games. Perhaps it’s the nature of their hardcore target demographic, but it seems for most people an RTS can never be too complicated.

If it’s packed to the gills with different kinds of units, skill and tech trees, complex maps, resources, mining operations and a customisable kitchen sink factory, then it’s probably considered a fairly average addition to the genre.

What’s interesting about mobile platforms like the Android is the inherent limitations of the system. Although a developer could, if he felt so inclined, pack all this complexity into an Android RTS, chances are it wouldn’t work all that well. Simpler is better.

So comes Archipelago to the paid Market, and it’s exactly the kind of simplified RTS I was hoping for.

You begin with a small collection of islands at one end of the map. There’s nothing particularly fancy about this map - indeed, it’s ultra-simple. The islands are just circles in the water of varying size. You and the enemy both begin with one big island each, which displays a number in the centre to let you know how many troops are stationed there.

You're only given one number, since there’s no worrying about different kinds of units, or buildings or any of that other typical RTS fare. The bigger the island, the faster your number of troops increases, and the more it can essentially hold. 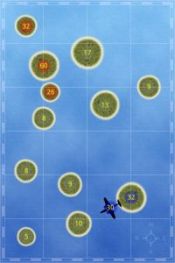 Dotted around the randomly generated maps are neutral islands, which are your first port of call in dominating the entire archipelago. These also have a number associated with them, though it doesn’t increase with time. Taking control simply means landing a greater number of troops there.

Touching one of the islands you control highlights it, then sends half the number of troops currently stationed there to the next island you touch. This could be to redistribute your own troops about the archipelago, to take over a neutral island, or to attack the enemy.

You can also select several islands at once, and send half the troops from each to one single destination - a great way to mount a larger attack, or to take control of a territory more quickly.

Of course, once your troops have set off on their journey, an enemy’s stronghold will continue to increase in number, so often enough a long journey can mean you’re outnumbered by the time you land. 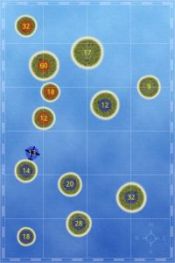 Moving about the archipelago and making sure you’ve enough men stationed at strategic points is vital to success, and the addictive intricacy of this monumentally simple RTS comes into stark focus. Naturally the enemy’s intelligence increases as the game gets going, and Archipelago becomes a fast paced and highly addictive little game in a very short space of time.

If you like the idea of some intensive strategising but aren’t into learning all about different kinds of units, tech trees or long-reaching battle plans, Archipelago is guaranteed to please. It might be a tad shallow for the seasoned strategist, of course, but it’s still a great way to keep your tactical wits honed while out and about.

It seems much of the games industry has forgotten that an RTS doesn’t have to be massively complex to remain invigorating and intensive. Archipelago reminds us that simplicity is the key to engrossing gameplay, and we can only hope this excellent light strategy title spreads to the other platforms.

The RTS genre refined into incredibly simplistic gameplay, which allows it to really shine as an immediately accessible and addictively playable mobile game
Next Up :
UFO99 review - "A fun little arcade game on the go"