Make your desk a warzone

AR Tanks is, pretty much as the name suggests, a tank game with augmented reality elements. You'll be able to set up a virtual tabletop for your tanks to do battle anywhere around your house. So if your desk looks like it could do with some tracked vehicles traversing on top of it, then AR Tanks is available on the App Store now.

The controls of the game are fairly simple. The movement of your tank is controlled by a virtual analogue stick whilst two other buttons on the right-hand side operate fire your shot and change the weapon type. To aim, you have to move your phone so the reticle lines up with the enemy you want to shell.

It's quite novel to see them roaming about your tables. Of course, being augmented reality this also means you can walk around the area you've created and view it from any angle. This means if you're playing on a smaller scale you'll be able to turn the game into a top-down view if you wanted to simply by standing up. All of which, if you're a bit nerdy like me, is really cool. 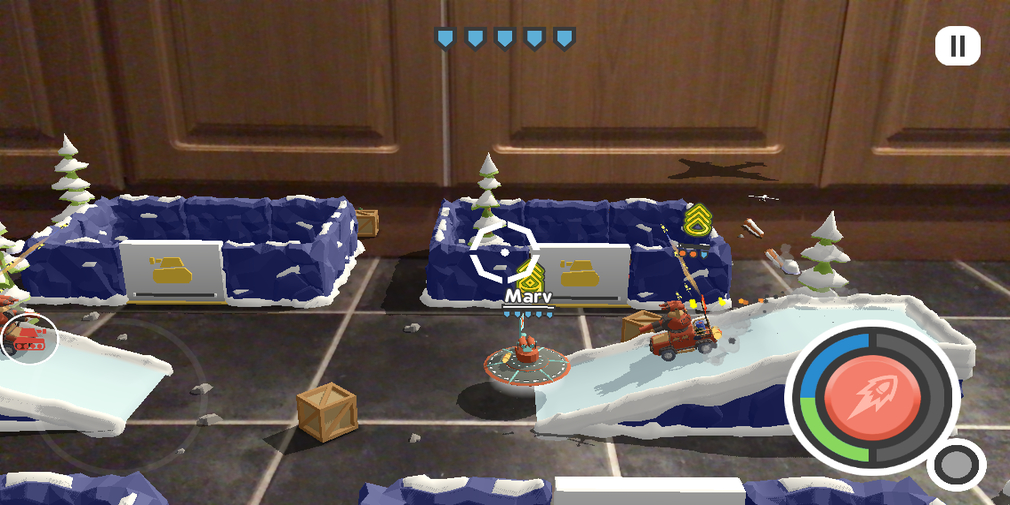 As you progress through the game you'll unlock more parts to upgrade your tank with, as well as different colour schemes to give it your own personal touch. And most importantly, you can get a UFO tank chassis, which I may have prioritised over getting better weapons.

The game has a number of modes to try out including survival mode where you take on waves of enemy tanks and a story campaign which currently has 40 levels. It will also randomly generate challenges to try to keep the game feeling fresh.

If seeing little cartoon tanks in your living room or garden is something you've always wanted then AR Tanks is available now on the App Store. It's a premium game that costs £2.99.