The standout feature of this fresh update? Gotta be the new magic portals mechanic, surely.

Alongside the portals, which suck in birds, pigs, and debris at one end and spit them out at the other, there are 30 new levels to get your teeth into. Oh, and six more unlockable stages for intrepid bird flingers.

The levels are all carnival themed and feature plenty of pigs to squish, magic hats to knock over, and secrets to uncover. 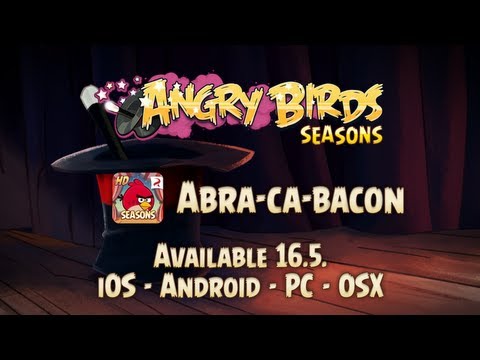 There's also an all new power-up called the AllakaBAM in the Abra-Ca-Bacon update. AllakaBAM is a magic box that makes a habit of exploding when you hit it.

Abra-Ca-Bacon's portals were cryptically teased by Rovio in an adorable Vine video clip featuring plushy birds a couple of weeks ago. If you haven't seen that 6-second clip yet, click here.