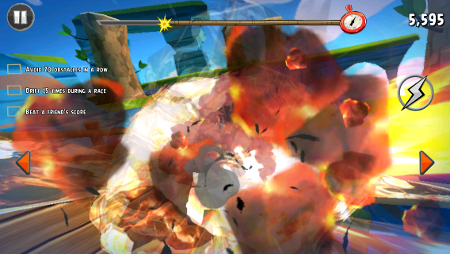 Bomb's special is primarily used offensively, as it is, rather fittingly, a bomb blast.

Tapping the Special button sees our man in black shake a little, then promptly destroy everything around him that's within his fiery reach.

The explosion's area of effect is quite impressive, but it's not infinite, so you'll need to get close to your target to catch them. I found that using the bomb quite early in a race gives more chance that it will hit a large number of racers, as it's within the first twenty seconds or so that the racers remain bunched together.

Alternatively it's very useful on the final few corners or a track if you're just behind the leading kart, as it will destroy them and not give them a chance to recover before you zoom past.

Since it's so effective at screwing up races for others, Bomb is a character best saved for competing with others, such as Race Challenges and the Versus mode.

However, if you do want to use him in other modes, then detonate as early as possible in Fruit Splat Challenges to clear the path, put yourself in the lead, and give yourself access to more fruit. The explosion can also be used to destroy obstacles, should you want to use it in the more passive capacities of avoiding blocks or perhaps hitting more of them as part of the various requirements in the Challenge Rounds.

Any questions? Have a few more tips? Pop a comment in the box below. Need a more general guide to playing Angry Birds Go!? Click here.
Next Up :
Best upcoming mobile games in 2021