Anagraphs is an upcoming word game from developer Cinq-Mars Media, who you may know from the likes of Synonymy, Lazy Chess and The Devil's Calculator. Their latest project is set to release for both iOS and Android on March 4th.

As the name heavily implies, it's an anagram finding game with a slight twist, it uses a special font that makes several letters vertically symmetrical. This means that rather than simply looking at one word trying to find others, you'll be able to rotate certain letters to create others. 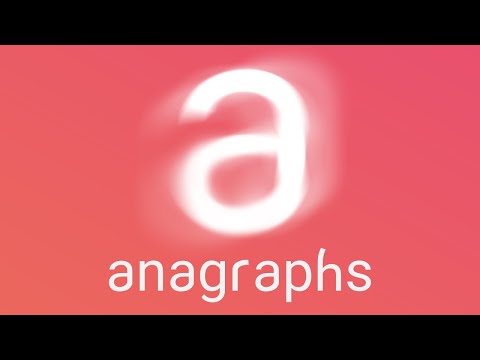 A simple example provided by the developers is the word 'ma'. Normally, the only other word you could make from this would be 'am'. However, in Anagraphs, you'll be able to rotate the 'w' which opens up the option to also create the word 'aw'. Essentially then, where you would normally only have a few words to find, Anagraphs will increase that number, giving you far more to discover than you'd immediately assume.

You can check out a few other examples in the embedded trailer above. The game has been described by Cinq-Mars Media as a spiritual successor to Synonymy and will task you with uncovering all the different possibilities to collect stars that can then be used to unlock additional levels.

If you'd be interested in giving the game a shot ahead of its launch on March 4th, then the developers have created a playable demo that you can play right now in your browser. Just head on over to their website and you'll be able to give Anagraphs a try.

Anagraphs will be available on the App Store and Google Play on March 4th. It will be a free-to-play game with the developers not aiming to turn a profit.

You can head over to the PocketGamer LaunchPad hub to find all of our exclusive announcements from our two-day event!
Next Up :
Fortnite v21.20 update brings New Indiana Jones skin set, Charge SMG, and more