Heard of Agar.io? Whether yes or no, it's now available on iOS and Android so you can play it on the go with new touchscreen controls, if you wish.

You've probably seen a YouTuber play Agar.io already. It's very, very popular right now. Why? Who knows - it just is.

It's an online multiplayer game in which you're on a mission to become the biggest cell around. Doesn't sound too great but it's more fun than that description may suggest.

You get bigger by gobbling up smaller cells and, when you're big enough, other players. The trouble is, you move slower the bigger you become, so chasing other players down to eat them up gets difficult.

Plus, unless you are the biggest cell around, you'll have other players to avoid as they try to gobble you up. It's a game of cat-and-mouse. 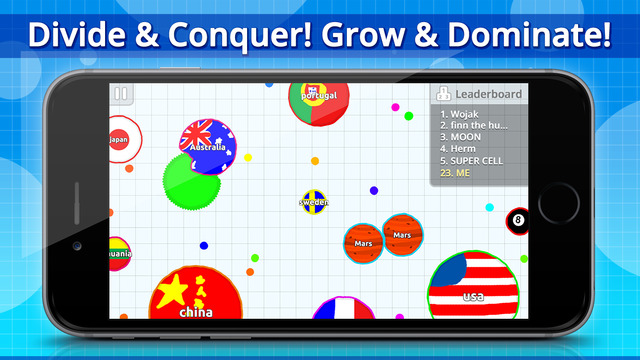 Luckily, you can also split your cell into smaller ones, launching them at other players to eat them up. This is how you can get them if you can't keep up.

However, breaking up into smaller cells puts you at risk as those smaller ones can be eaten up more easily than your bigger form.

That's all there is to the game. It's pure, simple competition that only requires the minimum amount of skill to play.