The complete strategy for huge profits

Maximising your profits in AdVenture Capitalist is a big deal.

And that's a big distinction to make, because the time it will take you to get from being a street bum, to a trillionaire is going to entirely depend on how you approach the game.

So then, ready to make serious money in a seriously short period of time? Read on... 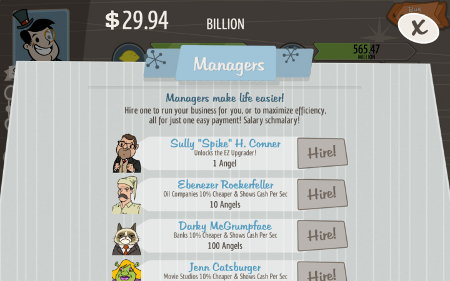 The first thing you need to know is that while AdVenture Capitalist may be a "clicker" type game, you don't need to do that much clicking.

Beyond the first five minutes of the game, if you're finding yourself clicking to start production a bunch then you haven't hired enough managers.

As soon as you can afford a manager for the Lemonade Stand, Newspaper Delivery or what-have-you then you should hire them to take the effort out of the work and production as efficient as possible.

Managers work even when you're offline, so if you close the game down and go do something else your hard-working team will be making money for you.

Therefore if you plan on spending your time playing other games, you should fire up AdVenture Capitalist first to spend your accumulated cash, then go do something else, and return to the game afterwards for a big injection of moolah. 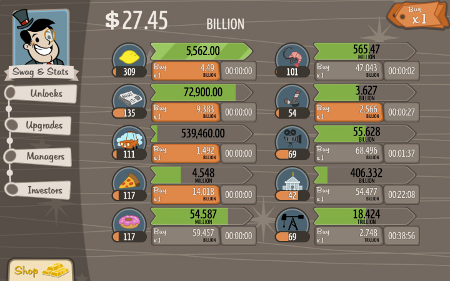 But here's the thing! If you're not planning on using your PC, phone, or tablet to play other games then you don't ever need to go offline. The PC version allows you to play using a second screen, or with the game windowed, and you can minimise AdVenture Capitalist and have it playing in the background if you like.

Steam also allows you to fire up multiple applications at once, so you can be playing this and a totally different game as well.

If you're playing on a touchscreen and want to multitask then simply have your system plugged in next to you. It's quite a hands-off type game, so you needn't worry about having to keep your attention on it all the time.

You can totally play the game at work, university, or school too, because of the above flexibility, and you totally should do this to maximise your profits. Pro-tip for not getting caught: make sure you turn off the sound by visiting the Swag & Stats section and clicking the Speaker icon. You can also use this function to listen to your own music or watch a movie uninterrupted. 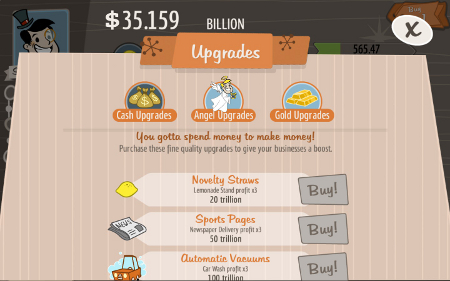 Buy the first few upgrades for a new business as quickly as you can, but after that put serious thought into whether you think the upgrade costs are worth the payoff in profits. For instance, your 200th Lemonade Stand won't return nearly as much of your investment in a single early upgrade to your Hockey Team.

If you do decide to do a lot of investment in a business, you can receive some very beneficial bonuses. Head to the Unlocks section, and then click the Gallery arrow, and you'll see everything the game has to offer when you purchase more businesses in a given industry.

For example, in regular increments all the way up to 400, Lemonade Stands will double the speed at which profits are produced, and beyond 400 the amount of profits generated is increased.

The point at which that level of investment becomes worthwhile is down to you, but look for the orange bars under the business icons to see how close to the next reward you are.

A final tip: in the top right corner of the screen is a tag that cycles between Buy 1, Buy 10, Buy 100, and Buy Max. This relates to how many businesses you buy at any one time, and I've found that just putting it on Buy Max and sticking with that is the most streamlined way of making purchases.

I hope you found this beginner's guide useful, but if you have a tip you'd like to share, then make sure to chuck it in the comments.