Unless you have a brain like a dictionary then it’s highly likely that as a child you dreaded taking spelling tests at school.

Nothing exposes your weak grasp of English more than being tasked with correctly constructing massive words, so you’d expect a game based around spelling to be about as entertaining as a Jedward acoustic gig.

However, we’re pleased to report that AbraWordabra manages to achieve the impossible. It skilfully combines frantic touchscreen action with Scrabble-like gameplay, and the end result is a family-friendly title that tests your reactions as much as that soft, spongy object located inside your skull.

Although AbraWordabra is divided into four modes, there are two basic gameplay sections on offer. The most prominent sees you guiding a series of walking letter blocks from the top of the level to an open book at the bottom.

When they reach the book, you can use them to spell the word which serves as the level’s puzzle - however, to reach the tome they must drop through various trap doors, which you can only open by swiping at them with your finger.

Although it’s possible to pick up the blocks and move them around, you can’t cheat by dragging them to the end of the level - doing so results in a harsh points penalty, and when you consider that your ultimate objective is to beat a predetermined score that’s not something you want to happen.

The second mode is a little more straightforward, and involves using your device’s accelerometer to guide a series of balloons up the screen. Various obstacles and hazards cloud the airspace, calling for some deft wrist movement and careful planning.

Initially, AbraWordabra seems a bit overwhelming. There’s a lot going on at once, even early on the in game, and some of the mechanics involved aren’t instantly obvious. Thankfully, the tutorial levels are clear and concise, and within a few minutes you’ll realise that AbraWordabra’s complexity is actually one of its biggest strengths.

What makes the game truly unique is the way in which it cannily melds action with word puzzles. Figuring out the conundrums is demanding enough, but at the same time you need to be marshaling the walking letter blocks to ensure that they reach the bottom of the screen as quickly as possible.

When you consider that later levels take place across not one but two different screens, the task becomes even more demanding.

While it arguably lacks the instant ‘pick-up-and-play’ appeal of titles like Angry Birds and Draw Something, AbraWordabra is nevertheless a solid casual experience that offers hugely rewarding gameplay for those who are willing to dig deep enough - just pray it doesn’t trigger recurring nightmares about spelling tests. 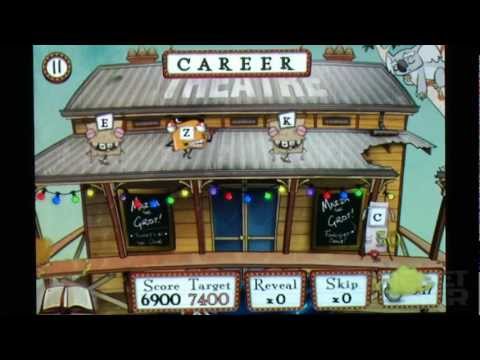 Cunningly fusing word play with finger-friendly action, AbraWordabra offers something that’s a little different from the norm, and is well worth investigating
Next Up :
Milo and the Magpies review - "A burst of colour and a short but touching story"