Having started off his career in game journalism, back in the days of CVG and Mean Machines, before going on to work for Sega, Codemasters and Halfbrick, it's fair to say that Tony Takoushi has pretty much seen it all.

Now based in Australia, he's trying something different, however.

We caught up with Takoushi to get his views on going solo, releasing cross-platform and the future of work games.

Pocket Gamer: You're seen plenty in your games career, so why are you starting your own studio now?

Tony Takoushi: Having been at Halfbrick for five years, it was an eye opener to see how relatively simple mobile games were when compared to console and PC formats.

The design could be pared back and the content/production was nowhere near as demanding and above all else it could be fun!

Mobile is a tremendous opportunity. It's very cluttered as it's an open marketplace so it's harder to get noticed but the rewards are there if you know what you are doing and work for them.

Apple has done an amazing job of ripping the market wide open. Yes, it's harder with more entrants but at least you can compete and I'm really excited to see so many cool games out there.

Did you learn any specific things from your time at Halfbrick?

I learnt that many things are possible with little financial resource (this was before Fruit Ninja hit).

You don't need huge marketing teams to get your game noticed. Also a game is finished when it's finished.

I've been in games 30-odd years and worked across most areas,and I'm still learning. I don't know it all; all I have is a very good perspective and a body of knowledge.

What was the spark of inspiration for AbraWordabrA?

I have a few books of core mechanics that I add to over time and this one seemed simple and addictive enough to work.

I sat down with the art director and we thrashed out a story premise and he went away and created the basic backstory that we then worked it up with a comic book artist.

How was the development process? Any significant issues/challenges?

There were tremendous challenges all the way through.

I used experienced coders for the technology and a very talented art director handled all the art direction and most assets. The rest was done by talented student interns.

The key was keeping a close eye on content to ensure we hit quality thresholds all the way through. That's very time consuming and very tiring.

What's your target audience for the game?

My goal from the start was to aim it for the casual market. This is not a game for hard core gamers: as such some reviewers may well not like it. Others will though and, in particular, I think casual gamers will.

Adults will really have fun with it (the Ultimate Genius mode is by far the most popular), but they can also sit down with their kids and do it together. There really aren't many games where you can do that.

And we've done a lite version too so people can try before they buy, so I think that will help.

How do you think a spelling game will find its audience amidst all the other games?

The thing is this - word games are exactly that and they have barely changed in essence for a very long time. There have been slight twists on established gameplay but to my mind no one has stood up and said 'Let's give word gamers something new but keep the core of word making along with a fun and cool new mechanic'.

I truly believe there's no point in just making better graphics and making your game run 'faster' on new tech. To me that's a waste of time... switch off the lights... go home... What are you really achieving?

As well as iOS and Android, you're releasing on bada. Why?

I've been asked that before. Bada is a small format and yes, returns will be smaller.

It boils down to technology. Since coming to Australia, I've yet to see engine tech that has been invested in. Converting to other formats was a chore and time consuming. I thought it was time for a change.

So, literally from day one, our engine tech was geared to ensure cross-platform functionality and ease of use. The bada conversion literally took five days, and was by far the easiest to QA (barely a day).

What's next for AbraWordabrA and Total Arkade?

I've started the next project at concept level. It's very cute, fun and very, very mass market. We'll be moving to production soon after AbraWordabrA launches.

We've done three updates for AbraWordabrA and they've been QA'd and are ready to go. I wanted to ensure purchasers of the game get good quality support in the months after launch.

I'm also looking at running one project as work for hire as I feel we can bring real value to a publishers idea if the time and budget are there.

Thanks to Tony for his time.

AbraWordabrA is released on today (2nd May) for iOS, Android and bada, priced 99c. You can find out more about it via its website. 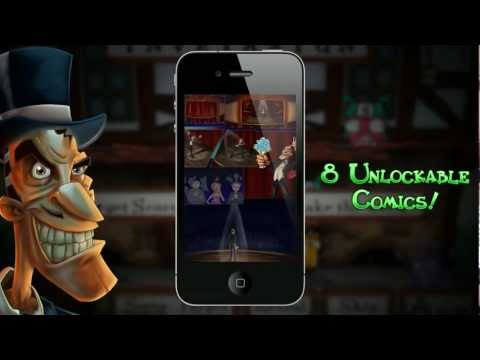 Subscribe to Pocket Gamer on
Next Up :
SIEGE: Apocalypse - Reasons to play this real-time 1v1 military card battler on mobile