A3: Still Alive invites players to celebrate its first anniversary with a bunch of new in-game content

A3: Still Alive, Netmarble's dark fantasy open-world RPG, is celebrating its first anniversary with territory openings, an increased level cap, and a new server among other updates. Players can expect new growth options and tons of in-game activities as a "thank you" to loyal fans for their support since the game's official launch a year ago.

In particular, A3: Still Alive's first-anniversary update features the new territory of Tuaki. Here, players can dive into the new "The Derelict Buried Tomb" equipment dungeon, as well as the new "Red Monster Kazan" world boss. The "Forest of Change" war zone dungeon can also be found here, plus a new "Swamp of Silence" raid.

To make sure players can handle the challenges in the new area, the Level Cap has now been increased to 200 along with a bunch of Level 190/200 items. Plus, Netmarble is rewarding players with cool in-game goodies such as a 7-star Legendary Soul Linker simply by logging into the game for seven days. 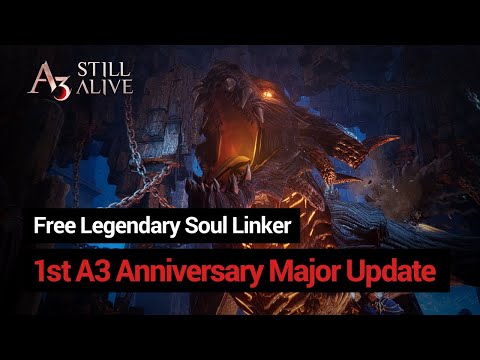 Additionally, the Welcome Power-up Mission offers both new and returning players a bunch of extra missions until they get up to 5 million combat power and even an 8-star Legendary Soul Linker. Finally, the 1 Year Anniversary Coupon [BACKTOA3] will give away lots of in-game prizes for free.

If you're eager to join in on all the festivities during the first-anniversary celebration, you can download A3: Still Alive on the iOS App Store or on the Google Play Store for Android devices. It's a free-to-play game with in-app purchases. You can also head on over to the official website to know more about the anniversary events, or take a sneak peek at the embedded trailer above.

Want more RPGs on your mobile device? Why not take a gander at our list of the top 25 best RPGs for Android phones and tablets?

Next Up :
Click Your Poison: Infected offers hundreds of choices and 50 possible endings in this new interactive game-slash-audiobook

A3: Still Alive is hosting a bunch of in-game events for players of the open-world fantasy RPG this June

A3: Still Alive's integration of the Inetrium blockchain technology is now complete