The App Army Assemble: A Short Tale - Size isn't everything

But this comes up a little short

We regularly ask members of our App Army for their impressions of the latest releases on mobile.

In this feature, we're looking at A Short Tale - the latest puzzler from Glitch Games - which is now available on iOS devices.

Chase - I’ve only put a little bit of time into A Short Tale, but it is noticeable that it's very raw. It's easy, but time-consuming and not much fun. Kainen - Have to agree and say this is a bit boring. Matt - It's one of a long line of escape the room games. The graphics are fine and there are plenty of puzzles to tackle at any one time.

I really like the camera idea as it's always a pain to have to scribble codes for later. You can photograph anything and refer back to it without losing your place.

Kainen - Agreed on the camera idea. That's quite neat. GGod Hand - Yeah, the most useful feature in the game is the camera. Anything that seems important can be photographed and accessed at any time.

You can even put them in the middle of a puzzle. It's really convenient. 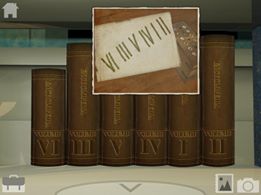 Chase - For the story, all you get is a guy that is sad about his brother disappearing, then he starts shrinking. There's not many hints to the story in the gameplay either. GGod Hand - Item usage can be quite frustrating. Unlike The Room, A Short Tale doesn't do a good job of indicating where items should be placed.

Sometimes it's obvious, but most of the time you'll hold onto far too many items at once, wondering where they belong. Hands-down, the worst thing about the game.

Kainen - This is so hard to play. In a puzzle game, that's normally a good thing, but in this case it's because the game is designed quite badly. I'm struggling to muster any excitement here. Quincy - This is one of those rare occasions where I have to agree with Kainen, there's just no magic here. I'm really disappointed as I expect more from Glitch Games. 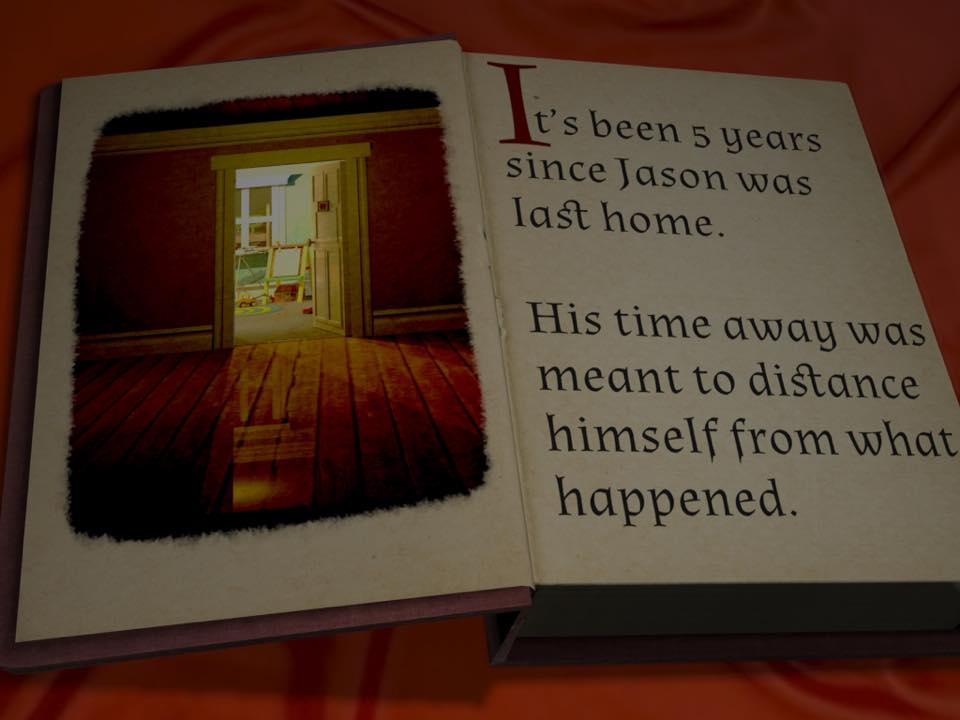 Alyce - Bring on the clichés of "It was all a dream." In my mind, that's what this is building towards. I'm not saying that's all bad, but in a world where humans can automatically shrink and talk to toys? This is totally a dream. GGod Hand - Yeah, the story leaves you in the dark a bit too much. The mystery behind your brother's disappearance is interesting, but the game itself doesn't develop any story beyond the intro.

Hopefully things will become clearer as we get to the end. The desire to solve the mystery itself is a real driving force, but I can see why a lack of story may turn some people away.

Olivier - Well, I don't agree on most points. I like the fact that you have to look for clues everywhere and have to use the elements to try and understand the puzzles.

The game is rather difficult at first, but I enjoy the challenge. I do agree that the graphics and navigation are a bit simple, but they remind me of the Forever Lost series, which I love. So it doesn't really bother me at all.

GGod Hand - The navigation is a bit confusing at first, but once you understand how it all handles it works really well. A tutorial on how to solve the first puzzle would help this game a lot.

The player would become better acquainted with all the control mechanics and perhaps make more of an effort with the game.

Right now, the game makes no effort to familiarise the player with the controls or story. Which is quite off-putting.

GGod Hand - Yeah, have to say I don't agree with most of you either. Personally, I'm liking the game overall.

I think a lot of people have been turned off by the difficulty of the puzzles, but that's the reason I'm actually liking it. I love the fact that the game doesn't hold your hand and just throws you into the world, leaving you to figure everything out on your own.

It's the very fact that you're small which forces you to think outside the box. Also, the game expects you to solve one puzzle at a time. Once you solve a puzzle, it gives you a clue or item that will enable you to go solve another.

Quincy - My biggest issue is that it feels like they just took some of their old puzzles from previous games and tossed them together.

I don't mind when a game doesn't hold your hand and guide you everywhere, but these puzzles are quite bland and the story leaves me empty. I don't really care what happens next.

GGod Hand - Who got hit with a bit of nostalgia when seeing this? 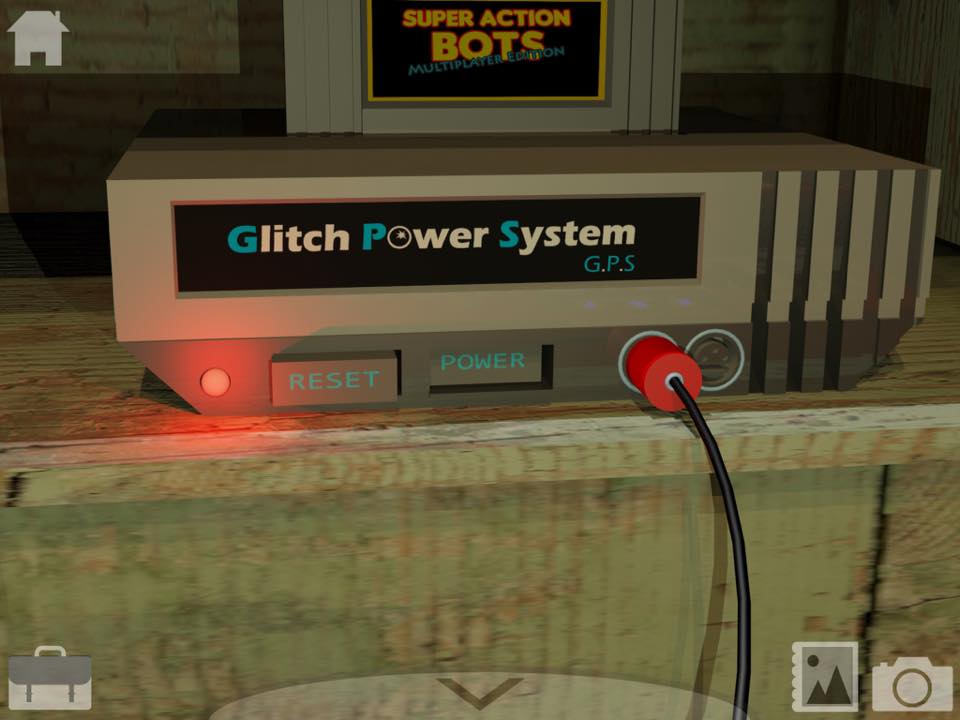 Kainen - I did, but a few nods to the past don't make up for the fact that the game is quite bad. GGod Hand - Ok, I've solved every puzzle in the game and helped out all the characters. And yet nothing is happening. Is the game broken or unfinished somehow? Ethan - In my opinion, the game could have had a great story and great gameplay, but the controls are awkward and the puzzles are frustrating. The base of the game is solid, but it just doesn't follow through on its ambitions. Kainen - It needs a bit of life injected into it. I find it so bland. Clint - Well, just going on the screenshots it looks very pretty. GGod Hand - Final word from me. I loved the puzzles, but overall I cannot recommend this game. It's more likely to frustrate than entertain.

I completely understand why many of you didn't click with it. And there doesn’t appear to be an ending either. I was under the impression the toys would help me open the door so I could leave the room.

They said they'd support me if I met their requests, which I did. But they haven't kept their word.

I mean, look at this useless heap of metal. He says he's going to help me, but he's just standing there doing absolutely nothing 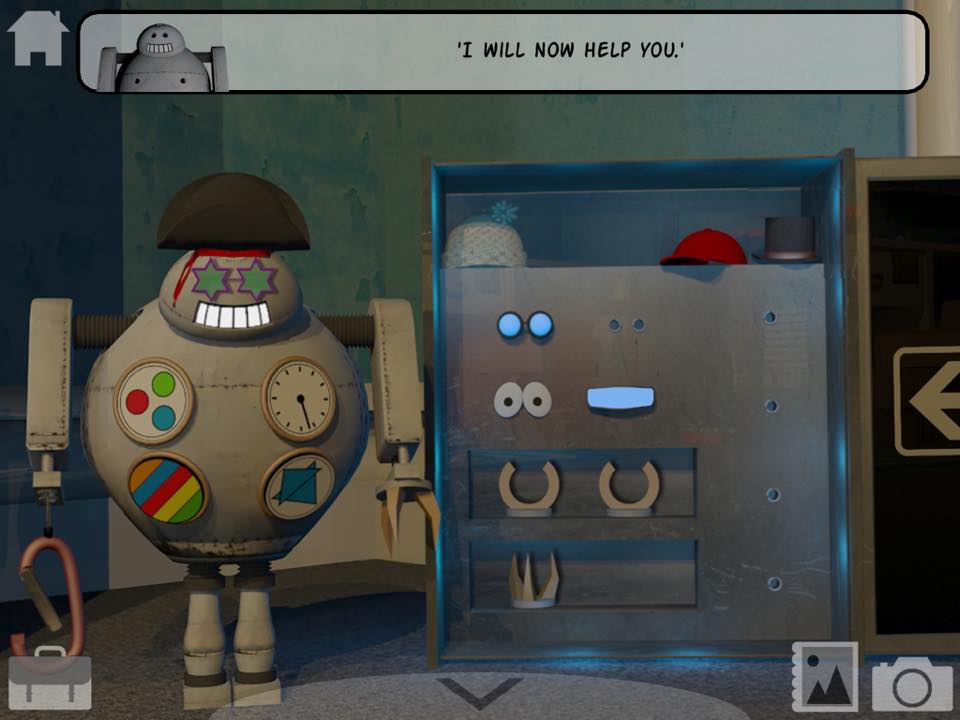 And you, I found all your children. Now it's your turn. Even your children are mocking me with their fake smiles. I thought we had an agreement. Screw you and the spaceship you rode in on! 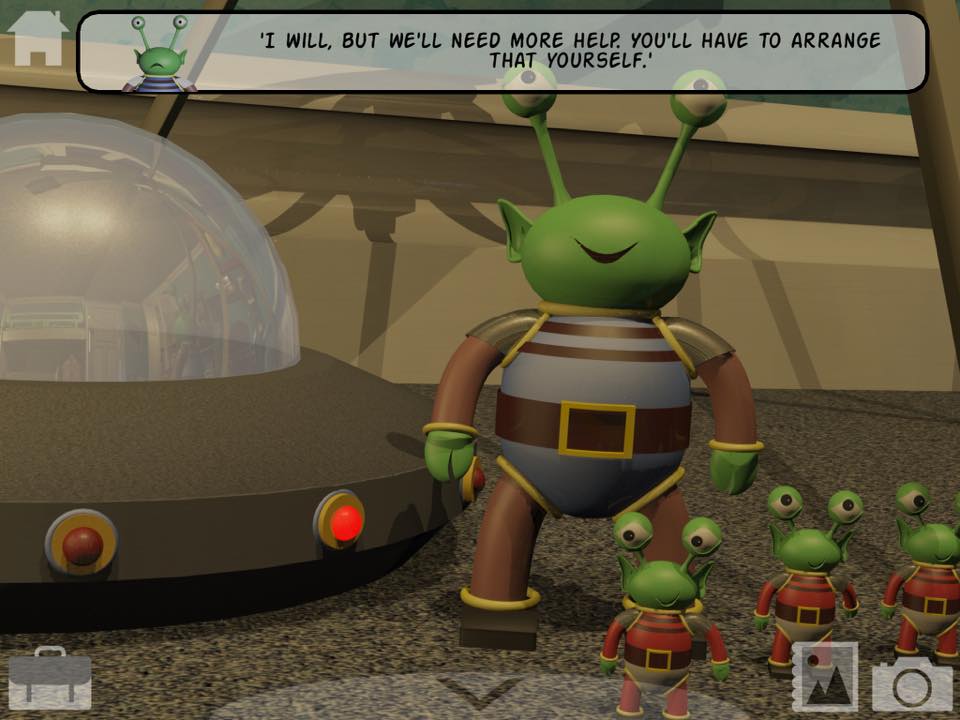 I fixed your train track, bro. What was the deal about helping me out? You're a liar, sir. A liar! 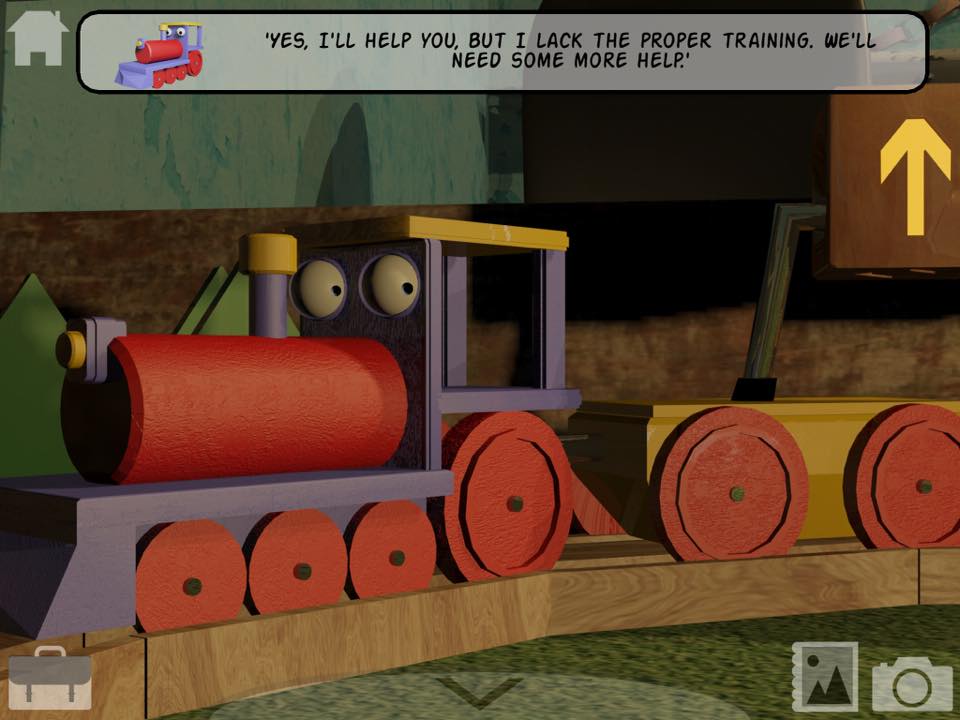 As for you, Mr Bear, I gave you your sight back. What did you give me? Nothing! You'll be hearing from my lawyers, buddy! 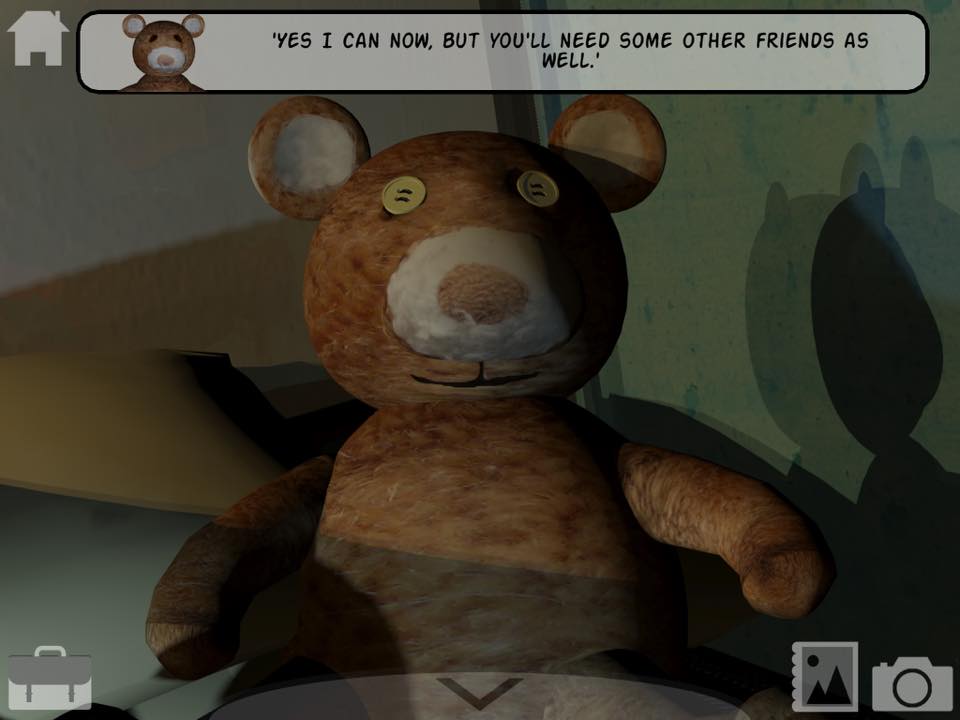 This guy just goes brain-dead when you organise his DVDs 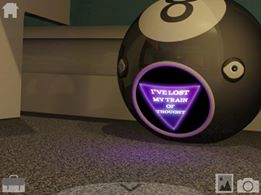 Oh, and how could I forget about this jerk. I gave him a purpose as a vacuum, but now he's just getting drunk on his USB cord. You had one job! 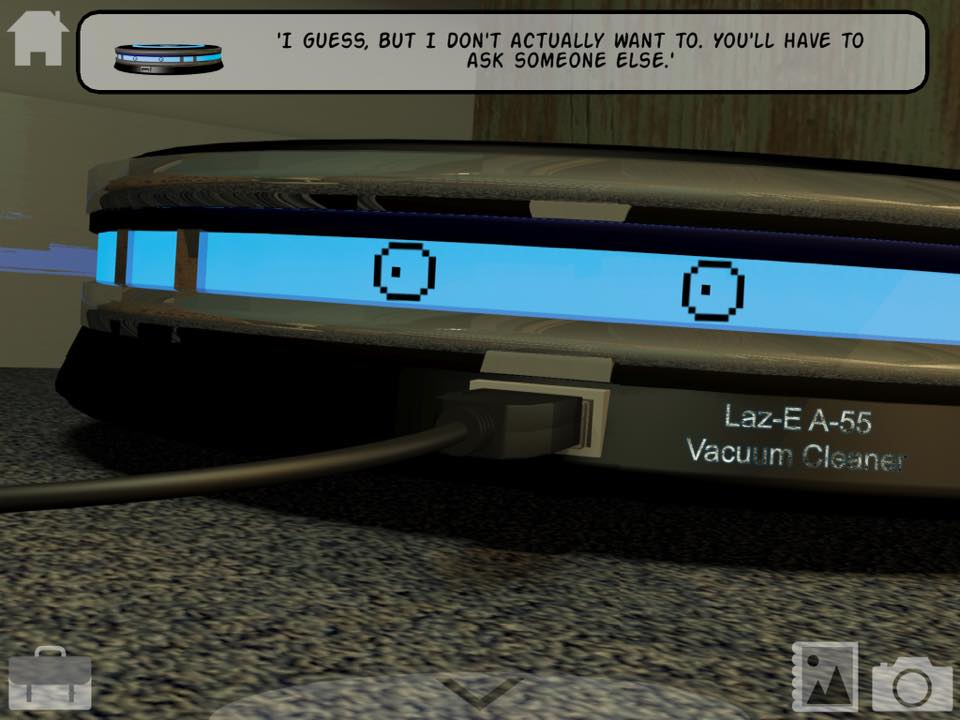 I've played this through twice to make sure I wasn't missing something, but I honestly think the game might be broken.

Quincy - I just downloaded Forever Lost 2 again and after playing through the first few puzzles, it still stands up better than A Short Tale.

I agree that the camera has always been a welcome addition to these games, but I'm really not feeling it. Sadly, there's no sense of joy that comes from solving these puzzles.

The App Army have spoken! If you'd like to sign up, please have a gander at our App Army application article. Have you played A Short Tale? What did you think? Talk to us in the comments.
Next Up :
5 new mobile games to try this week - August 11th, 2022