Yono and the Celestial Elephants review - A Switch adventure worth remembering?

Switch
| Yono and the Celestial Elephants

Yono and the Celestial Elephants is charming, adorable, and really makes you smile. Or at least it does to begin with.

But, for a game that lets you put a chicken on your head while making cute trumpet sounds, there's something about it that's severely lacking.

It's a great game for a younger audience, but I'm not sure that it's for everyone.

Yono and the Celestial Elephants is an isometric adventure / puzzler with combat elements and a decent amount of story-telling.

Playing as the twinkle-eyed elephant, Yono, you arrive back on Earth every thousand years during a period of great need, and have to help mankind restore their balance. Elephants are heavily respected because of their rarity. 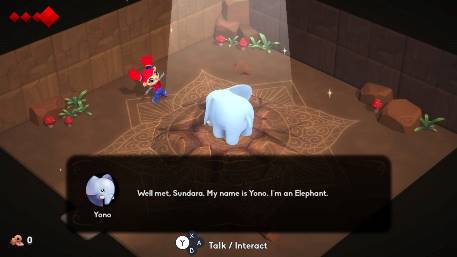 You meet a spunky young girl, head to the nearest town, chat away to the locals, solve their problem, and venture off to the next place.

While the majority of the game works in this fashion, you're also faced with room-like puzzles, each of which has a primary mechanic.

This can be as simple as creating moving platforms by blowing on a windmill, but they get more complex as the game goes on.

Visually, the game is colourful and almost Oceanhorn-like despite its blatant Legend of Zelda influences. Its bright graphics and cute character design make it utterly charming, especially when twinned with Yono's little toot.

There's a lot of repetition in the gameplay but the actual design of some of the levels is wonderful. You're need to combine your abilities to loosen a key or unlock a door, and that helps break up the monotony.

When you're not getting on with the story there are pots to smash, currency and heart tokens to collect, and skins to buy for your elephant pal, which is fun if you're into that type of thing.

For a five-ish hour-long game there's also a surprisingly deep mythology, and learning about it from the NPCs is a joy. It's just a shame that the story itself isn't nearly as interesting.

One of the major problems is the game's combat system. Yono can headbutt and spray water and peanuts, and throw things, but the enemies put up a very feeble fight and go down quickly.

Thanks to this there's no rewards or upgrade system, making it a bit of a bland affair. 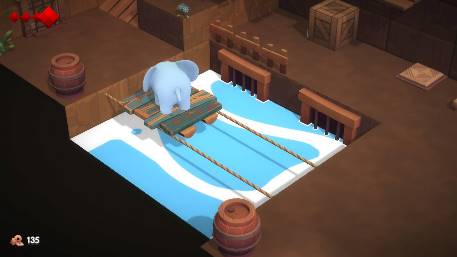 The bosses aren't much harder, but they are more interesting. Rather than headbutting them to death, the boss battles are based around solving fast-paced puzzles.

Maybe they should sometimes

There's a lot of good about Yono, but there's a fair chunk of bad to balance it out.

It's a short game so it's easy to brush off the limp combat, but its clunky controls, two-dimensional characters, and thin storyline draw away from the overall enjoyment.

Still, if you're looking for a lighthearted experience that won't challenge you too heavily this one may be for you.

Yono and the Celestial Elephants review - A Switch adventure worth remembering?

Yono is a simple, cute puzzler which excels in its puzzle design but lacks in story and combat, and that's a shame
Next Up :
Evony: The King's Return review