A rewarding journey: The making of Year Walk

"We wanted to challenge the perception of what a Simogo game is."

A world away from the colourful, arcade experiences of Simogo's back catalogue, Year Walk represents quite a departure for the Malmö, Sweden-based indie studio.

The first-person adventure game's melancholic, unsettling horror stands out against Simogo's previous work, in terms of genre, tone and its approach to storytelling.

Yet in other regards Year Walk is a continuation of a journey Simogo has been on for some time, the latest step in founders Simon Flesser and 'Gordon' Gardebäck's unique creative direction.

In our latest making of we speak to Flesser about the origins of this chilly tale and delve a little deeper into Year Walk's bleak world of Mylings and Night Ravens.

"We had been talking about doing something with a darker tone, or horror inspired, for quite a while, but we never really had a concept to fit that ambition," says Flesser.

"Then Jonas Tarestad showed me his script for a short movie called 'Årsgång,' and I was really intrigued by the concept."

The Simogo boys, Simon and Magnus

Translated from the Swedish, Årsgång literally means "year walk." Bound by a set of strict rules, year walking was an ancient Swedish phenomenon with the purpose of seeing the future.

On a festival day such as May Day or New Year's Eve, a year walker would sit alone in a room without warmth, light or food until the stroke of midnight, before venturing out into the dark.

Once on that journey, says the legend, participants would be greeted by visions and offered a glimpse of things yet to pass - be it love, life, death or despair. 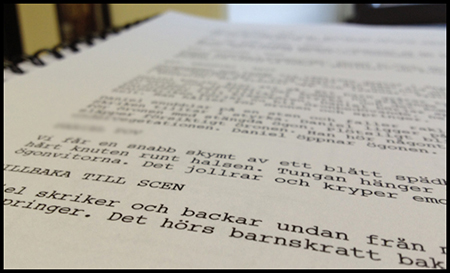 "With Jonas' script we finally found a good story to match our ambition of doing something with a more somber tone" says Flesser. "Some real star aligning, there."

"Like a force of itself the project began taking shape in early 2012."

Year Walk's development initially overlapped with a number of other Simogo projects, yet from an early stage the studio had a clear vision of what the game would become.

"From late May or early June we planned the game from start to end while working on a number of other projects full time," says Flesser.

Only once these other projects were out of the way was Simogo free to focus on Year Walk. However, the game's story, puzzle structure and explorable environment demanded that the studio abandon its usual approach.

Simogo typically employs a more freeform style of development, one that does not place too much emphasis on design documents or plans. But Year Walk was different. 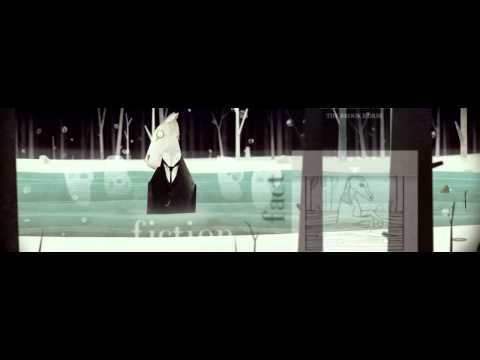 "I think the biggest challenge was to make a game with a narrative in one 'open' world, without levels and a traditional game structure," says Flesser. "Our usual style of improvisation-development didn't quite work for this type of game."

"We used a number of tools including Unity, Maya, Audacity and Madtracker. But the most important tool for us is always pen and paper. We've been scribbling maps and symbols like crazy persons for this."

To allow players to explore Year Walk's snow-covered expanses, Flesser and Gardebäck had to settle upon a navigation mechanic.

"While working on Bumpy Road one day we asked this silly question, 'How would a first person game work in 2D?'" says Flesser. "Quite quickly we came up with the swiping concepts, but at that time we had imagined a game in which you moved about in rooms." 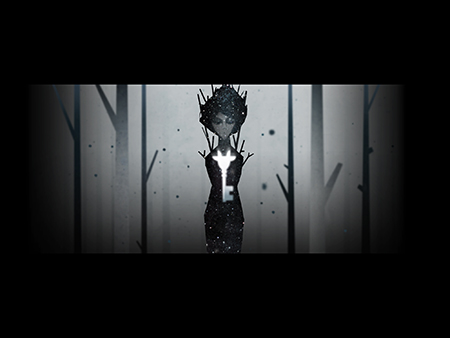 Transplanted to an open environment without convenient, guiding walls, the solution was to allow players to swipe freely along a horizontal plane, with movement forwards and backwards restricted to certain points.

Viewed from a perspective that traditionally prioritises forwards momentum, the effect is user-friendly, yet alien enough to add to the game's sense of unease and disorientation.

"Making it feel good, fast and intuitive was a big priority and I think we succeeded," reflects Flesser.

As with the controls of Simogo's previous output - Kosmo Spin, Bumpy Road and Beat Sneak Bandit - Year Walk's approach plays to the unique strengths of the platform. Even the game's interactive puzzles are only possible using multi-touch inputs and accelerometers.

So while they may be unlike anything Simogo has done before, Year Walk's methods of interaction and navigation are also an extension of the studio's established ideals.

Similarly, Year Walk's austere, almost papercraft-esque visuals may seem like a deviation from Simogo's typically colourful approach, but they can also be seen as the continuation of a theme.

For Flesser, it's about a desire to communicate as much as possible by showing relatively little.

"Visually I think Year Walk's art style is an an evolution from the things we explored in Beat Sneak Bandit," says Flesser. "I feel like I am constantly refining and breaking down my style to its basics, and Year Walk is a part of that search." 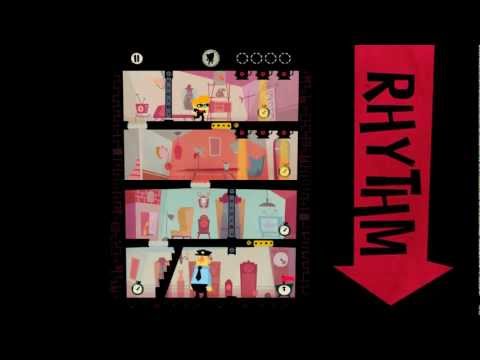 However, when it came to creating the architecture and objects of Year Walk's world, a location trip undertaken by the team left Flesser feeling he could have been more adventurous.

"We made a one-day road trip in the south of Sweden to get some nice photos and get inspired," says Flesser, reflecting on the excursion.

"It was weird and appropriately cold and foggy day, and we encountered some truly unique things such as a quite amazing charcoal kiln and the ruins of an old church in the middle of a field, which led us to believe that we had indeed been a bit conservative with the environments in the game." 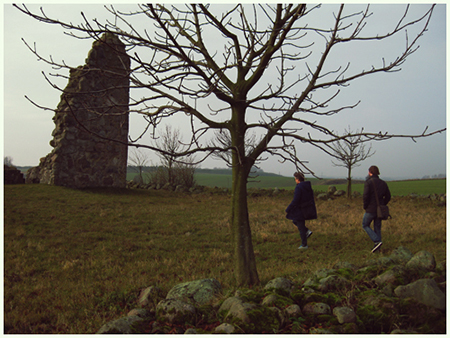 "I had hoped to do this a bit earlier, instead it came quite late in the project. Next time we'll make these type of things before the project has started."

Because it draws on ancient Swedish folklore, in terms of story and iconography, Simogo was initially concerned that players may find Year Walk a little too alien.

"We had a few concerns regarding how people would be able to relate to the unfamiliar concepts presented in Year Walk and we needed a way to present them," says Flesser. "So we came up with the Companion as solution." 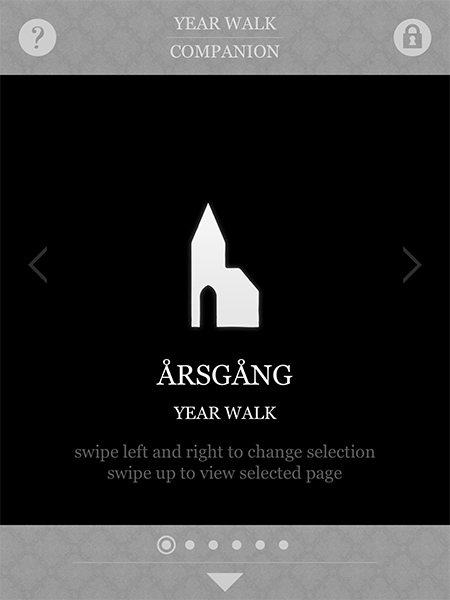 Written by Scandinavian folklore expert Theodore Almsten and released simultaneously with Year Walk as a free download, Companion is more than just a guide.

"The Companion also helps people to feel connected to the experience," adds Flesser, "as the Year Walk universe and concepts spill over to things other than the game itself, and we find that really interesting.

"It's like this little window into a world and it makes you feel like an explorer, detective or researcher when you read it. That aspect is something we'd like to explore more in the future."

Though Flesser is understandably reluctant to elaborate, the Companion ties back into the game directly, in a kind of postmodern meta-textual twist. It's just another example of Simogo's willingness to exploit the potential of mobile platforms in unique ways.

When quizzed as to whether the studio is able to track the amount of players that discovered this synergy, Flesser says, "We don't track any user behavior at all. I find tracking users without telling them to be very very questionable, and the acceptance towards it extremely odd.

"However, the amount of downloads of the Companion is a bit lower than that of the game, at about 90 percent."

Beyond the inspiration and research provided by Jonas Tarestad and Theodore Almsten, Simogo also collaborated with Daniel Olsén to create the game's haunting soundtrack.

"Daniel is an old colleague and friend of ours," says Flesser.

"We had talked for quite a while about doing something together, and Year Walk seemed like a good fit for the collaboration. I think Daniel's music is a huge part of the atmosphere, and it also inspired my sound design for the project.

"I think Daniel being Swedish was very important, otherwise I'm not sure he could have found that melancholic Swedish tone."

"We thought it would be neat to follow up the tradition of having an acoustic song by Jonathan for this project, just as all of our previous games, and the result is quite marvelous!"

Despite these positive experiences, however, working with so much external talent brought a new set of challenges.

"There has been a lot of lessons learned," says Flesser. "Working with collaborators outside of the office was more time consuming than I had guessed."

In the lead up to Year Walk's launch, Simogo released a number of mysterious teaser trailers and images, and even updated a collaborator's website.

The result was a fan base that sought to decode the released information and work out exactly what the game was, increasing the buzz as a result. 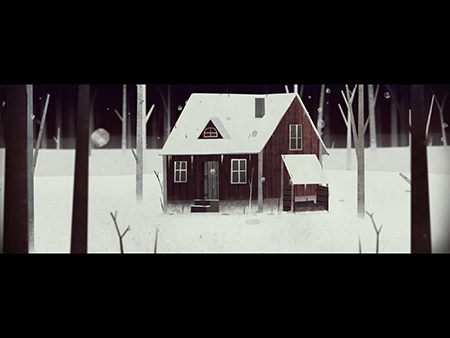 "We haven't really considered it consciously as marketing," says Flesser.

"We've viewed it as part of the Year Walk experience for a small devoted public. It's been a little game in itself, and at the same time a way for us to communicate the mysterious ‘flavour' of the game without giving anything away.

"We don't know a lot about marketing so there was no real approach to it, we just wanted to make something intelligent, enjoyable and interesting that would lead up to the game's reveal, which I believe might have been done just a little bit too early. It's a learning process."

Despite their worries, however, Year Walk was finally released along with the Companion app in February 2013. Development had taken around just short of a year, far longer than any other title in Simogo's history.

The reception has been overwhelmingly positive.

"How people would react to something as untraditional and quite demanding as Year Walk was a big pressure," says Flesser, "but reviews and reception have been amazing. We thought it would be a bit more divisive, but it's mostly been fantastic, so that was a big relief for us."

Helped along by prominent App Store promotion, including Editor's Choice, Year Walk has performed well commercially too, peaking at number 3 on the overall iPad charts in the US. 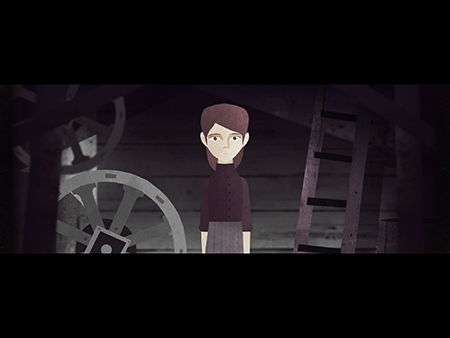 "This has been a real gamble for us, both creatively and financially, as the game took quite some time to make, but it has paid off and has given us much courage in creating more unique experiences," says Flesser.

"That makes us feel really good, as one of the things we worried about was if there was a place for these types of experiences on the App Store. It's good to know that there is.

"Year Walk has proved to us that a lot of people enjoy more experimental things, which has given us a very good mind-set to start out a new project with. So hopefully the next one will be quite unconventional too."

You can found out more about Simogo on the studio's website.
Next Up :
Heroes of Crown: What to expect from Woobest Game's 3D idle RPG