We vila tell you all about it.

An action RPG with a story rooted in Slavic folklore, Yaga is all about choice and hidden motives.

It's always nice when you see a friendly face in a crowd of strangers. Among the selection of games shown off as coming to Apple Arcade later this year was a game I've been following for a long time: Breadcrumbs Interactive's Yaga.

While it may, from the trailer, look like a fairly standard aRPG, Yaga has a lot of extra things going on. For a start, there is a mass of weapon options which can be crafted and found, these change up the way that the protagonist attacks. Being a one-handed blacksmith, Ivan might sound somewhat redundant, however with weapons like a grappling hook, or massive warhammer, it's very easy to clear a screen of enemies. Each weapon type works in its own way, with plenty which stun or pull or push enemies around the screen. 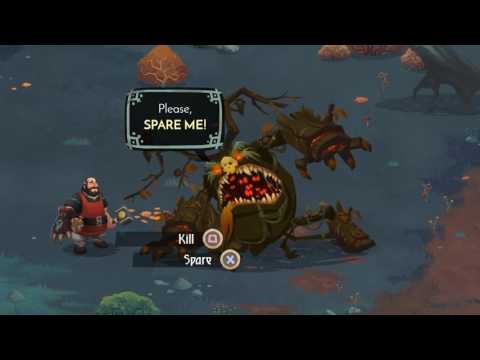 Each of Yaga's levels are generated between scenes, each scene bookended with conversations between ancient witches. Players lead the conversation, choosing the topic of discussion between the witches and their choices — the four witches subsequently control Ivan's fate and path, an interesting way to set the journey of the player. There are also quests dotted around the maps, these ensure that combat isn't too much of a slog, breaking up your exploration with puzzles.

These quests can be anything from simple fetch quests to choice driven ones. They branch off around the map area well, and normally wrap up within the same zone. For instance, you might steal an object from one character to then bribe another to stop blocking your path.

While stealing might be a quicker option, another feature of Yaga is reputation. If you go around pinching pennies and beating up little old ladies then it'll come back to bite you. Citizens in the hub won't trust you, the mythological creatures throughout the world will react differently to you too.

So, where most action RPGs encourage replayability through ramping up difficulty, Yaga will do the same with its branching paths and twisting alliances, and that's something that I can get behind.