Get your contemporary PVP here

iOS + Android
| World at Arms - Wage war for your nation!

If you look at the top grossing charts, many are base-building PVP/PVE games such as Supercell's Clash of Clans and Kabam's Kingdoms of Camelot.

Good timing then for Gameloft to launch its own base-building PVP/PVE game.

Out now for iOS, World at Arms is a contemporary military sim that has you running the US army against the North Korean-inspired "evil alliance of highly trained forces known as the KRA".

At least, that was the option I chose, although I was a bit confused and thought I was selecting the language when I hit the US flag.

Graphically, World at Arms is nothing like as fluid and polished as Clash of Clash, but better than some others in the genre.

Basically, you build up your base as you'd expect, creating barracks to train units, mess halls to feed them, and power stations to provide electricity etc.

Each building provides you with some resources over time and there's a fairly complex resource system to get your head around.

There are coins and gold stars, which are the two hard currencies you can purchase with real cash. These are used to buy buildings, tanks, planes and other units, as well as speeding up the building process. Gold stars are the most important.

In terms of the action, this happens in Campaign mode, where you fight around the globe.

Battles are similar to classic Nintendo game Advance Wars, as there's a split screen and your chosen units fight it out automatically with the enemy.

You can load out your mix of troops or just hit the auto-deploy button.

Gameloft has tweaked the gameplay a little too, adding some quicktime elements so you swipe enemy rockets out the way, and detonate mines etc. And this is where you use your power ups.

Of course, you can also fight other players via the Online mode, adding Allies and gifting them stuff. You populate your friends list either using Facebook or Gameloft Live.

Just released on iOS, and out soon for Android, we'll be keeping an eye out to see how World at Arms performs in this highly competitive and lucrative sector.

In the meantime, here's the introductory trailer, although it doesn't contain much gameplay. 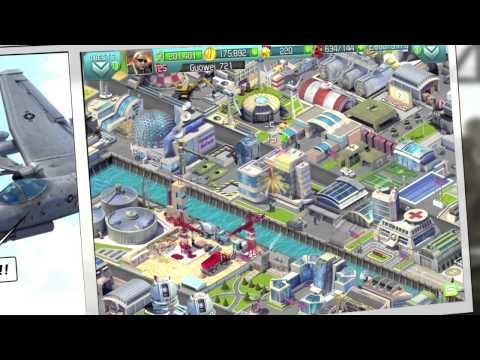 Subscribe to Pocket Gamer on
Next Up :
A3: Still Alive introduces latest update which adds a new Guild Boss to challenge and an abundance of events