Summer blockbusters and Saturday morning cartoons have always had tie-in video games. And they've always been crap, churned out by overworked developers against impossible deadlines.

But that's all changed. The new trend is to take some existing smash hit app, redecorate it with characters from a show, and watch the dosh roll in. That's certainly the idea behind Angry Birds Rio and Temple Run: Brave, to name just two.

The latest is Where's My Perry?, which takes Disney's hydro-centric physics puzzler Where's My Water? and crams in a bunch of jokes from Phineas and Ferb.

The basic premise is identical to the setup in Where's My Water?. You need to get some suds - usually found sloshing about in an underground reservoir or spurting out of a tap - to an exit pipe.

You direct the water through the level by digging out dirt with your finger, re-directing it through pipes, bypassing obstacles and avoiding sludge. In the original your water fills Swampy the Alligator's bath. In Perry, it powers a pneumatic tube to send a fedora-wearing platypus into the next room.

Playing Perry sometimes feels like re-treading ground you've already covered in Swampy's story. The tutorial levels are near identical, and we've played with concepts like sludge and steam before.

But once the game finds its feet it starts to introduce some new elements - playthings that even veteran Where's My Water? players will find fresh. There are blocks of ice that can freeze your water solid, and nuisance pipes that (somehow) transform your water into useless confetti.

Obviously, the trappings are all new. Perry replaces Swampy, there are bearded garden gnomes instead of rubber ducks, and Dr Doofenshmirtz shows up every now and again to deliver quips.

I don't know if the TV show is a giggle, but this app certainly isn't that funny, and cameo appearances went over my head. Most of the time I just missed ol' Swampy and his slapstick antics.

Where's My Water? is one of the best puzzle games on the App Store. It's devilishly clever, constantly surprising, and packed with content. Perry's puzzles are just as smart as Swampy's (and there are a lot of them, to boot) but you'll need to know the show to really appreciate this spin-off. 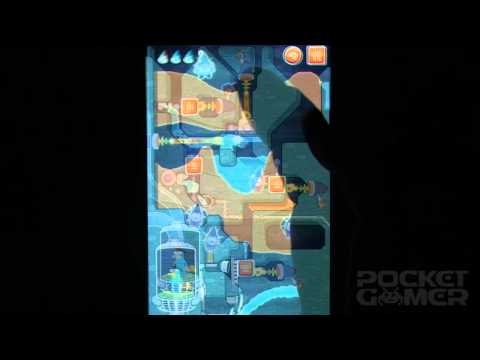 Perfect for Phineas and Ferb fans and Where's My Water? obsessives who crave new levels - but casual Swampy fans will find plenty to do in the original
Next Up :
Automatoys review - "Tactile fun from days long past"