The ultimate guide (Updated to A Platypus Never Forgets)

Meet Perry, the secret agent hero of Where's My Water? spin-off Where's My Perry? In each world, Perry is called to the offices of Major Monogram, only to get stuck in a malfunctioning transportation tube along the way.

So it's up to you, in this Disney-published puzzler, to direct water into the hydro-generator that powers this spaghetti mess of tubes. You'll need to avoid sludge, outsmart Dr. Doofenshmirtz, and solve tricky puzzles to succeed.

The game is full of brain-teasers, hidden collectibles, unlockable bonus stages, and secret achievements. They're no match for the staff of Pocket Gamer, though, so allow us to pass down our wisdom with this exhaustive guide to Where's My Perry? 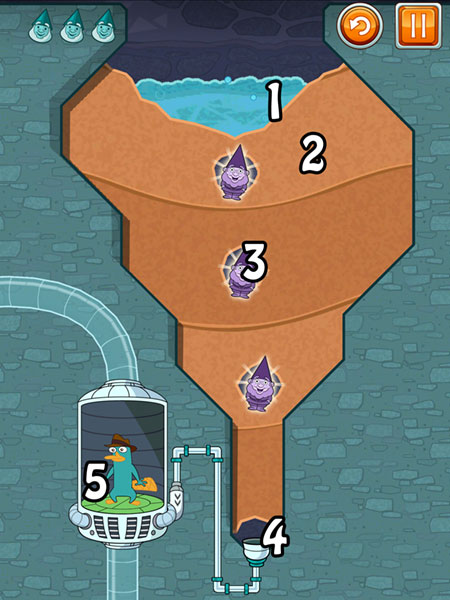 To beat each stage, you'll need to deliver water - usually stored in a reservoir or shot out of a pipe - to the drainage pipe above Perry. Do this by tunneling through dirt and solving puzzles. Get about 20 droplets in his pipe and the hydro-generator will send Perry to the next stage.

1. Here's your water - the blue stuff, splishing and splashing about with realistic physics. It's your job to deliver it to Perry's generator. 2. Good old-fashioned dirt. This brown stuff can be dug through with your finger, creating tunnels and dips for water to travel through. Remember that water will always obey gravity, so don't expect it to travel uphill without a little force. 3. Gnomes! There are three of these optional collectibles in each stage. To grab them, fill them up with a little water. You can either get them as you go or simply beat the level and come back later to pick them up. You'll need a certain number of gnomes to unlock new worlds. 4. Here's your main water pipe, and the exit point for the level's water. You need to get about 20 drops in the pipe to end the stage, but get more than that in and you'll earn bonus "overflow" points in that level. 5. Perry. A secret agent platypus with a fedora. He'll often chat to Phineas and Ferb characters using a telecommunications gizmo on his wrist. Wait. Do platypuses have wrists?

Water. Just like in Where's my Water?, the goal in Perry is to deliver this wet stuff to the goal. Try not to waste any on the way. We'll cover chemical changes later. Dirt. This brown stuff is easy to get rid of, simply by scrubbing away at it with your finger. Stone. Stone cannot be dug into with your pinky. The only way to chip away at this hardy material is to cause an explosion. More on that soon.

Pipes. These pipes redirect liquids about the level. Whatever lands in the open cup will be shout out of the connected hose. Celebratinator. This dastardly invention sucks up water and turns it into useless confetti. To bypass these, either obstruct its airflow (with a block of ice, for example) or drip some sludge into its mouth. Taps. These pipes shoot out liquid for as long as you hold your finger on the faucet. Note the colour of the tap to know what type of liquid will come out. Light blue means water, dark blue means cold water, white means steam.

Sludge. Icky purple stuff. It ends the level if it gets in the hydro-generator and it destroys gnomes. Unlike the goop in Where's My Water, it doesn't vaporise water. Lava. Like sludge, this kills gnomes and ends the level if gets in the main pipe. As for chemical reactions, it turns water into steam, turns ice into water, and turns sludge into lava. If it touches cold water it explodes. Cold water. It looks like dark blue water, but this turns normal water into ice on contact. It also turns steam into water and explodes if it touches lava. Finally, it kills gnomes and ends the level if it touches the hydro-generator

Buttons. These activate colour-coded gates when splashed with water or sludge. Floor grates. Water goes through these grates, but sludge doesn't. Plug it up with sludge to let water flow past. Steam pipe. If the pipe connected to Perry's tube looks like this, it means you need to send steam instead of water into the hose.

Steam. Steam rises up (and is used to collect floaty steam gnomes). Send it into ice, cold water or a coolinator to turn it back into water. Ice. This chunky stuff cannot be dug. It turns steam into falling water and, if it makes contact for long enough, turns water into ice.

Reflectinator. Or "mirrors", if you're not a mad scientist with a penchant for silly names. These reflective surfaces bounce laser beams around corners.

They can also be attatched to gates (both automated and manually-moved types), so they can move around the level.

Those tips should teach you the basics to besting Where's My Perry?, but if you're still struggling or finding one specific level more difficult than the rest, this series of video guides will help you out.

An Agent I Can Trust - A Thousand Times Over - The Puppetmaster

The Fall of Major Monogram - A Platypus Never Forgets

Some stages have hidden dossiers for you to find. In this section we'll tell you exactly where to find these bonus bits. Load up the level we specify, and then dig the dirt where our arrow is pointing to collect the secret file.

If you find three collectible files in a set you'll unlock a bonus level. You can find these secret stages in the "collection" screen, available from the main menu.

Each stage features a balloon (with a man's face, for some reason) which floats up towards a vacuum pipe at the top of the level. You need to ensure the balloon's safety by digging paths, pushing it with water and building icy barriers.

Watch these video tutorials if you get stuck. There's an achievement in it for you. 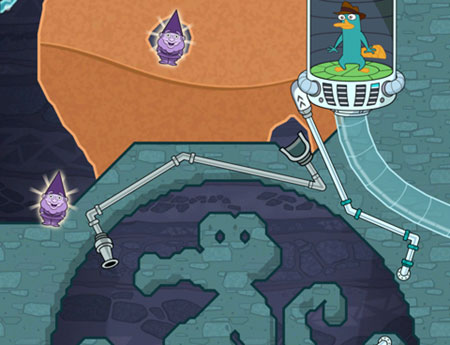 Semi-Aquatic
Where's My Perry? hides a secret tribute to Swampy - the alligator hero of Where's My Water? To find it, return to the very first menu (with Perry sleeping next to a trash can) and hit the settings button (it looks like a cog).

From here, click "Credits" and then tap on the rubber duck. This takes you to a level called Semi-Aquatic. It's super easy, but if you get stuck watch this video guide.

Once you've beaten every level, found every gnome, grabbed every file and completed every bonus stage, all you've got left is the achievements. These are shown in the game, and also appear on your Game Center profile so you'll want to get the lot if you want to show off. Here's how.

An Agent I Can Trust, A Thousand Times Over, The Puppetmaster, The Fall of Major Monogram, A Platypus Never Forgets
You'll get 20 Game Center points every time you finish all the levels in a certain world. You can't use the level skip cheat, so play fair.

Efficient Cut
All you need to do is cut the dirt with two fingers at once. You'll get 10 Game Center points for your trouble.

Confidence
To get this, you need to complete level 1-10 ("Warning Lasers Convert Water") with only one cut. This one is more about timing than anything. Don't make your cut until the roaming gate is moving upwards, and has just cut off the laser fire.

Persistence
Complete a level after retrying seven times or more. Speaks for itself. You might get this by yourself in some of the harder stages, or just force it by hitting retry seven times before finishing a level.

Quick Finish
Complete level 4-19 "Party Time" with a time bonus of 50 seconds or more. Watch the walkthrough in the video guides above, and then replicate the movements with an eye for speed.

Next Up :
Are there any codes for A Universal Time?