A week is a long time when you're building a kingdom.

Thanks to jetlag I was awake and at the computer as We Rule went live early last Saturday morning. I got a good couple of hours playing online before America woke up and the servers went all funny for the following days.

The first hour of any game is always the most important, and in the case of We Rule, there's plenty to do. You're levelling up fast, and as well as buying land to grow crops on, you're building cottages for your workers, planting trees, and generally getting to grips with how everything works.

Throw in some mojo as you level up - mojo is the game's conversion currency that means you can complete jobs immediately - and the pace is even faster.

You get a bit of free mojo but fundamentally you (or at least some small percentage of players) are supposed to buy it with real money - We Rule being a free2play game.

The other enjoyable aspect of We Rule is its sociability as you're encouraged to tweet and update your Facebook news with the fact that you're playing the game. In this way, other players can add your kingdom and you can use their facilities to create items for your kingdom (and vice versa).

Although the in-game process could be much easier. I found the best way was to search for user names I knew within the Plus+ social network that the game uses, rather than within We Rule itself.

In fact, via Twitter, I almost immediately hooked up with someone I knew who within the first two days of playing We Rule had spent £18 on mojo to speed up his experience. For the record, I only spent two lots of 59p; the first to check it worked and the second due to a specific impatience in terms of levelling up.

The latter was an interesting case in point, because it shows just how powerful such time-based games can be in terms of converting desire into cash.

All my fields were full and buildings occupied with work but I was just a couple of points from levelling up. In addition, I knew I didn't have time to wait for these tasks to end as I had to go out, and was playing on my iPod touch via my wi-fi home network. (Note We Rule is an online game, so you always need a connection.)

Impatiently I spend 59p to buy 5 bottles of mojo to speed up my crops, levelling up in the process, and in turn gaining some more mojo through levelling up. I then played the game for another 10 minutes to reset everything for the next time I logged on.

The following days saw me logging on at least a couple of times a day, mainly to harvest my crops.

Cleverly these mature at different rates so you can choose what to sow knowing it will be ready to harvest in anything from 5 minutes to 24 hours. The longer they take, the more XP and gold you get. However if you don't harvest them in time, they spoil and you get nothing. Luckily you can set up push notifications to alert you when they're ready to harvest.

As you get further into the game however, We Rule becomes less about crops and more about other forms of commerce. Mines, tailor shops, logging units, schools, and windmills can be purchased, and once built are available for your friends to use. This gains you XP and gold, and because you have to manually accept or reject each requested job, brings you back into the game regularly.

More importantly, it also adds some social glue; I ended up with over 20 friends in the game, only three of whom I actually know.

Yet by the end of the week, as with most online games, We Rule was becoming a bit repetitive as you focused on the grind to get to the next level, get more gold to buy the next big item, or expand your castle into something more impressive.

At this stage, the lack of real sociability, in terms of proper interaction with other kingdoms became more apparent. I decided I'd had enough.

Significantly though, I still cared not to just leave my kingdom and never return. For one thing, if you have buildings, your friends will try to use them to make goods and it seemed rude not to occasionally pop online to fulfil these.

Hence the only conclusion I could think of was to go into the menu, select the redesign tool and then sell everything I'd bought; converting it into a small amount of gold. This I spent planting trees, taking my kingdom out of the capitalist cycle, although without any little people to enjoy the trees (they only come with the crops and buildings), there's no one to enjoy my patchy mini forest. 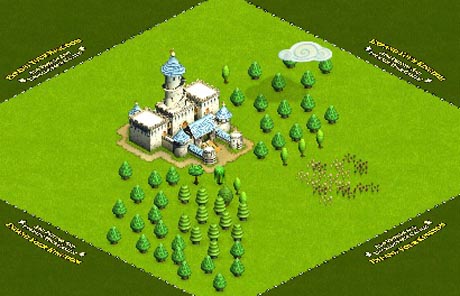 It is an effective way to kill the game however.

So my kingdom is now stuck forever at level 12 (apart from the server bug that for some unknown reason keeps re-introducing a single field).

However, as an footnote, there is a further point to this story.

While I enjoyed playing We Rule - and clearly this type of game appeals to millions of players; see Farmville et al - there is a lack of flexibility that designers need to think about.

People play these games at a varying pace depending on what's going on in their lives. Sometimes we play obsessively, sometimes not for days or weeks. Giving us options to stop and abide, while still having the ability to restart our levelling grind should we so choose would surely improve retention in the longrun.

Personally, I'm sure We Rule will be updated with more features and gameplay abilities in the coming months, but that's not something I'm going to experience unless I start again from scratch.

And that's not going to happen.

It's game over as ngmoco's shuts down first gen F2P titles We Rule, Touch Pets and GodFinger

Ngmoco offers gamers a notional $3.50 to play We Rule