The Emperor blesses the prepared

Warhammer 40,000: Deathwatch - Tyranid Invasion is the latest in a long line of Games Workshop branded games to hit the App Store, but this one has two things going for it that set it apart from the others.

First, it's developed by the excellent Rodeo Games, who made Warhammer Quest and the Hunters series. Second, it's actually really, really good.

But it might be a little daunting if you don't know your Heavy Bolter from your Power Fist, or your Carnifex from your Swarmlord.

Don't worry though, like the very best battle brothers, we've got your back.

In this guide we'll walk you through the basics of the game, explain some of the deeper mechanics, and make sure you're well positioned to force back the swarm in the name of The Emperor.

The most important thing from the start is getting to know your squad. Sure, they're all armour-clad giants with frankly ridiculous names, but they've all got their own skill-sets that mean you'll need to use them differently in battle.

Assault marines are close-combat specialists, tactical marines are your mid-range workhorses, and devastators are heavy-weapon toting bad-guy mulchers. Having a well-balanced squad is as important as getting your tactics right.

When you're levelling up, to begin with it's a good idea to focus on the attributes that are going to help out the various classes the most.

For ranged specialists it's a good idea to up their accuracy and crit-chance, whereas beefing up the health of your melee combatants will set them in good stead for their ludicrous charges.

Keeping your squad together should be a major concern. Together there's a much better chance that you're going to survive. The lone wolf is too easily surrounded and picked off.

At the same time you want to make sure you're using your marines to the utmost of their abilities. It's all well and good waving a massive gun about, but if you can't see anything to shoot with it then it's a bit pointless. 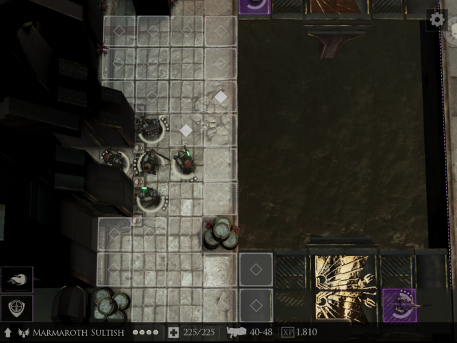 By the same token, if you've got a guy with a sword wandering around in the middle of the pack, you're not using him smartly.

Rushing ahead into the fog of war might show you where more enemies are, but you'll use all of your AP to do it, and essentially have to stand there and take a beating.

Slow and steady wins the race. Never move more than you have to, never waste AP on storming ahead, and keep an eye on your positioning to make sure you're not blocking any of your marines wherever possible.

Overwatch lets you fire during the enemy's turn, and it's the most powerful weapon in your arsenal. Move slowly, watch your corners, and set up overwatch to pick off anything that tries to attack you while you're waiting for your next turn. 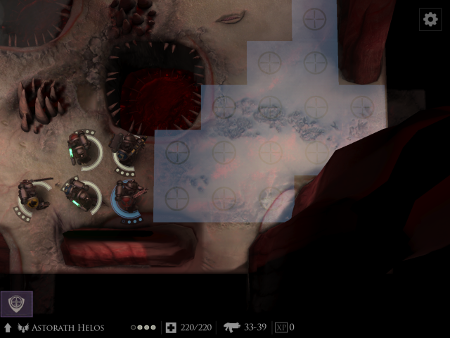 Sometimes it's not going to be possible to set up overwatch, because you've had to clear out too many Tyranids on your turn, or you've overstretched with your movement, but if you've got ANY AP left, you should always try and give overwatch duties to your marines.

Your devastators and tactical marines are the best bets for overwatch, especially if they're equipped with bolter weapons. Plasma guns might do more damage, but there's a danger they'll overheat and you won't be able to use them in the next round. Which leads us nicely to...

In your equipment screen you'll be able to check out the strengths and weaknesses of the wargear cards you collect, and see what boosts and buffs they have on them.

Your weapons are graded, and even if a higher grade of weapon doesn't do as much basic damage as a lower grade one, it's worth checking out what it's special attributes are before you sell it. 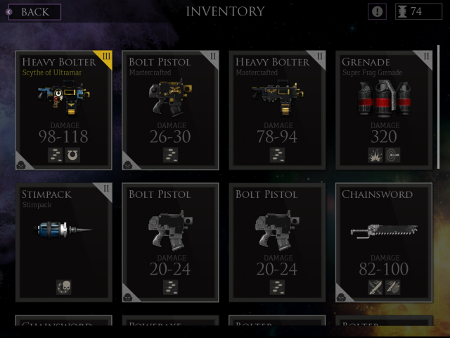 Getting rid of weapons you don't need will give you currency that you can spend on packs of cards that will give you extra equipment, which will hopefully be better than the stuff you just sold.

Some weapons can only be equipped on Space Marines of a specific chapter, so make sure you check before you start trying to stick Heavy Bolters where they're not supposed to go.

A good way to differentiate quickly between your marines is to change their names on the Space Marines screen. It might break the fourth wall a little, but calling them by their role and load out will make things easier.

If you find that you want to up the challenge a little, you can head back once you've completed the game and hit levels again at a harder difficulty level. You'll get more loot as well. 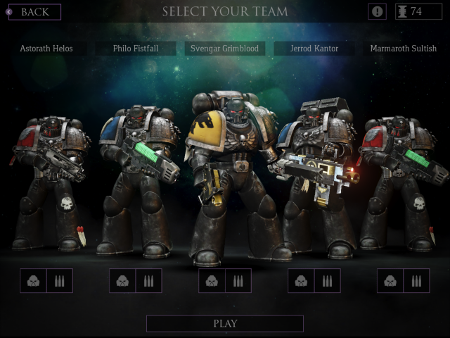 It's a good idea to rotate your squad as you get more marines too. Keeping a decent number of them at similar levels will ensure you've got the force to deal with anything.

And remember that veterans might be a lower level than the rest of your squad when you unlock them, but their extra power means you should draft them into your team as soon as you can.