Wargroove won itself a lot of admirers with its charming pixel art and accessible strategy play. But, like all the best thinking games, that simplicity hides a surprising amount of depth. Just spawning units and pushing them toward the front lines won't get you very far, even in the single-player campaign.

If you're struggling you can always dial down the difficulty. But if you want those stars, or the pleasure of crushing your friends in multiplayer, try these handy hints instead.

As much as you want to get stuck into each fresh game, take a moment to pause. Have a look at the map, consider your objectives and spend some time thinking about how the two relate.

In most cases, you want to pay particular attention to structures and scenery on the map. The first order of business is to ensure you've got at least income parity with your opponent. Note where the nearest villages are, which ones you'll capture first and those, in the middle of the map, you'll be fighting over. 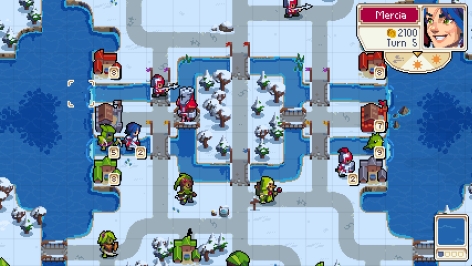 Then check out choke points on the map. Although the game has plenty of air and sea units, most action takes place on land. Exploiting narrow corridors is a fantastic way to get an edge over an opponent because they're easy to defend. Especially if there's a nearby village you can use to reinforce or mountains to increase range and sight.

Take all this into consideration and try to form a rough plan for the first few turns. Prioritise capturing villages: don't be afraid to send cheap units out unsupported to do this fast, before your opponent gets there. Then start to use the terrain to cheaply defend part of your territory while concentrating your offensives on another.

The key to much of Wargroove's strategy is a rock-paper-scissors game of unit vulnerability. Spearmen are super effective against cavalry, for example, but vulnerable to archers. To win, you'll need to maintain a mix of unit types and exploit these vulnerabilities to your advantage.

If you press B on a unit, you'll see what it's effective against and vulnerable to, but it's a bit hard to read on-screen. It might be worth printing off a copy of the chart like this one for easy reference during play.

Actually using it effectively is one of the hardest things to learn in Wargroove. As a general rule, it's a good idea to have the bulk of your forces made up of Spearmen, with some ranged support. That combination is cost-effective and works well in both attack and defence. 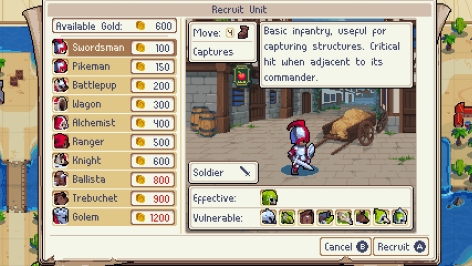 The reason for this is that it makes it easy to leverage Spearmen's critical hit ability, activated when two such units are next to each other. Several units have such abilities: dogs, for instance, score a critical if the target is adjacent to another unit.

Critical hits can turn the tide of battle in your favour, so make use of them whenever you can. Spearmen aren't very fast, so before attacking, it's often worth moving one unit into a space adjacent to the one you want to attack from. Then move your attacking unit into place and cross your fingers for that critical. You can rotate units in such a formation as they get damaged.

To get that adjacency bonus with your Spearmen, you need to make sure they can move into the right spaces. If you select one, you'll see it's movement spaces displayed. If necessary, cancel, select another and make sure they can all get to where they need.

The game gives an advantage to the attacking unit as they'll damage the target unit before it can attack back. So you should be checking range often. Not only to make sure you can get where you want but to stay out of enemy movement range, ensuring you can get in the first attack. 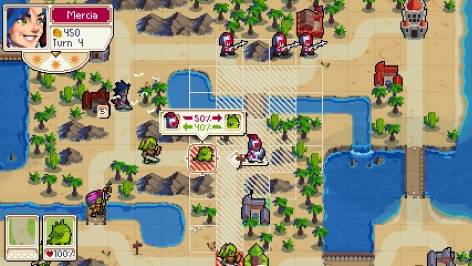 When planning range and manoeuvre, also take terrain and blocking units into account. You can't move through enemy units. So if you position your troops carefully, even low-health units can block a foe from reaching a vulnerable target like some Archers.

You can use terrain which slows down movement like forests and mountains, in a similar way. But terrain has a second advantage, which is defence. Where possible you want your troops on forests and mountains because they'll take less damage. Similarly, you want to tempt enemies out of such defensive positions if you can.

Over the long term, the efficiency of what you build in Wargroove becomes a critical factor. There are two kinds to take into account: gold and build efficiency.

Cannon-fodder troops like Swordsmen and Spearmen are very gold-efficient. If you pit a single expensive unit against its equivalent cost in cheap troops, it will almost always lose. That's because it only has a single attack versus the many attacks a swarm of units can inflict.

Likewise you can use such a swarm to move, capture and block choke points much more effectively than one big unit. 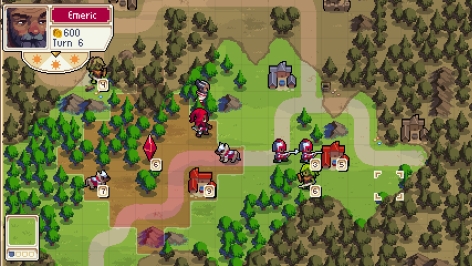 However, cheap units are not build-efficient. Each barracks you control can only build one unit per turn. So if you've got a lot of gold and few barracks, it still makes sense to buy powerful troops with low gold-efficiency.

Remember also that some expensive units offer extra advantages. Archers are very squishy for their cost, but their ranged attack is very powerful. Airborne units are even more extreme since many ground units can't attack them back at all.

Getting the balance right is difficult, but it depends on the map and the number of villages and barracks you control. If you can get stable income, Knights offer a great balance between gold and build efficiency and make good mid-game units. Just watch out for those Spearmen!