Aaron - The humour in this game is really well done and written. I am struggling with it, though. It's super hard. Really makes you think tactically and you definitely can't go in all guns blazing! 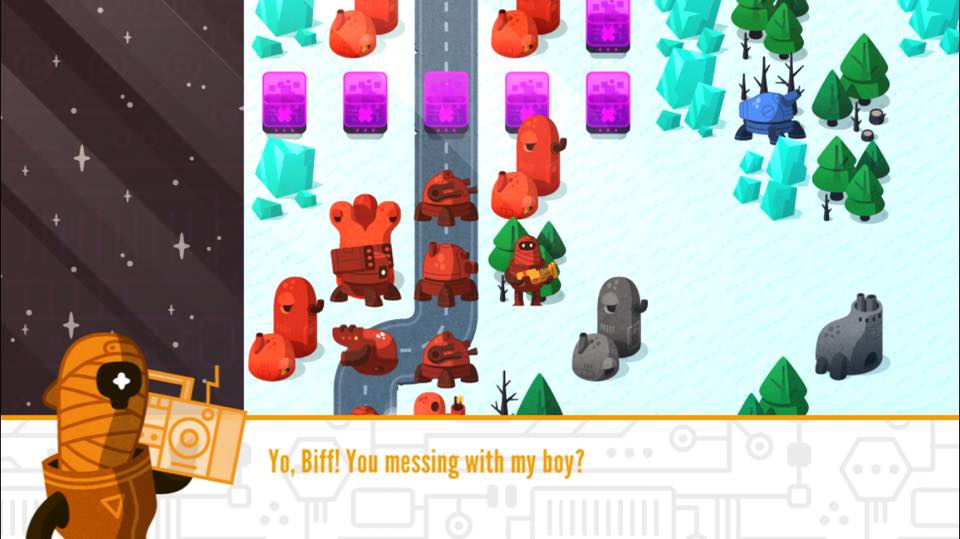 GGod Hand - Yeah, it's all about countering the enemy with the proper unit. Managing your economy is just as important too. This really is a thinking person's game. Chanadler - It's also very colourful, nice, and easy on the eyes. I love the design and overall look of the game. GGod Hand - Literally a few seconds into Sector 1-1 and I've fallen in love with Warbits. It gives you one heck of a first impression.

As Chanadler said, the art style is great. There's a cute sci-fi robot-ish thing going on with vivid colour choices, which also looks great on the environment.

I also really like the writing. The dialogue between the warring factions is downright hilarious. I'm constantly smiling and laughing at the discussions.

The game is heavily influenced by Advance Wars, which is a good thing. This one has huge potential.

Edward Davis - Spot on with the Advance Wars comparison. A nice, simple strategy game with similar animations and gameplay. Chanadler - Agreed, though this seems a lot tougher from what I remember. Aaron - Yeah, this one starts simple but gets really fiendish. If you'd told me Nintendo had made this, I'd believe you. Ray - There's a really unusual obsession with food, though I do agree with his opinion on scrambled eggs. They're not bad with a bit of tomato sauce. Aaron - I kind of like the random obsessions in the dialogue. This game really has heart. 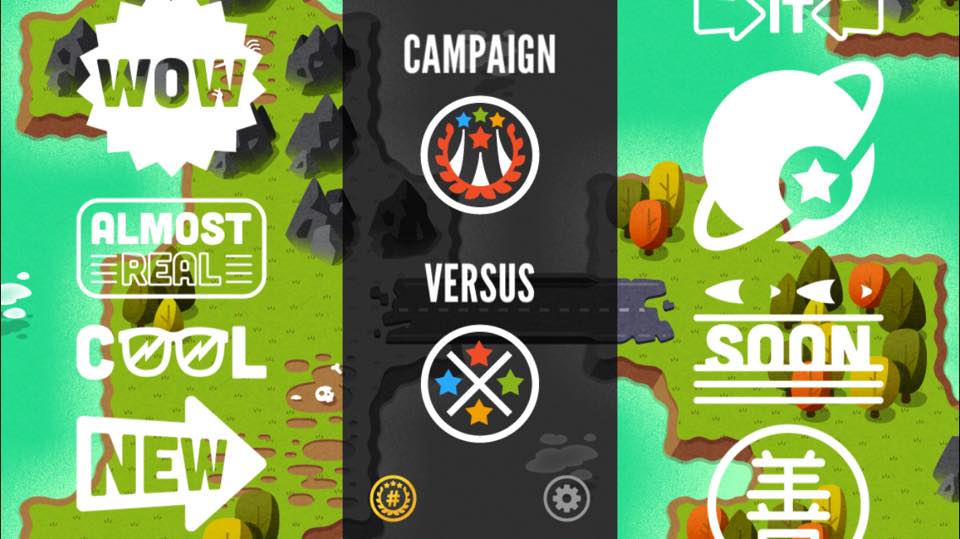 GGod Hand - Everything about the game is so well done. Warbits feels so polished. I genuinely think Risky Lab has tons of talent, and a lot to give the world of gaming. Chanadler - It's a good game. Tough, but good. The AI seems pretty capable of offering up a challenge. After a few rounds, it's already come very close to beating me. I've only just scraped through with a win quite a few times. I'm definitely liking this. Aaron - I'm pretty much long-pressing on every enemy unit to check their range before I do anything! Kainen - So far, this is an okay game. I find the humour bad and the story is so boring that I actually started skipping. I will keep playing as I love the genre, but there doesn't seem to be anything new here, nor am I finding it as fun as similar titles. Edward - I've been skipping the story too. With games like this, it's not story I look for. The games never last too long. Around 5 minutes or so. Just enough for a quick coffee break. Matthew - I actually went ahead and bought the game. I'm loving it. Totally feels like Advance Wars, which is awesome. I've been wanting another one of those for so long, but Nintendo and Intelligent Systems seem hesitant. Kainen - I think I'd prefer Advance Wars any day. This is, at best, okay. 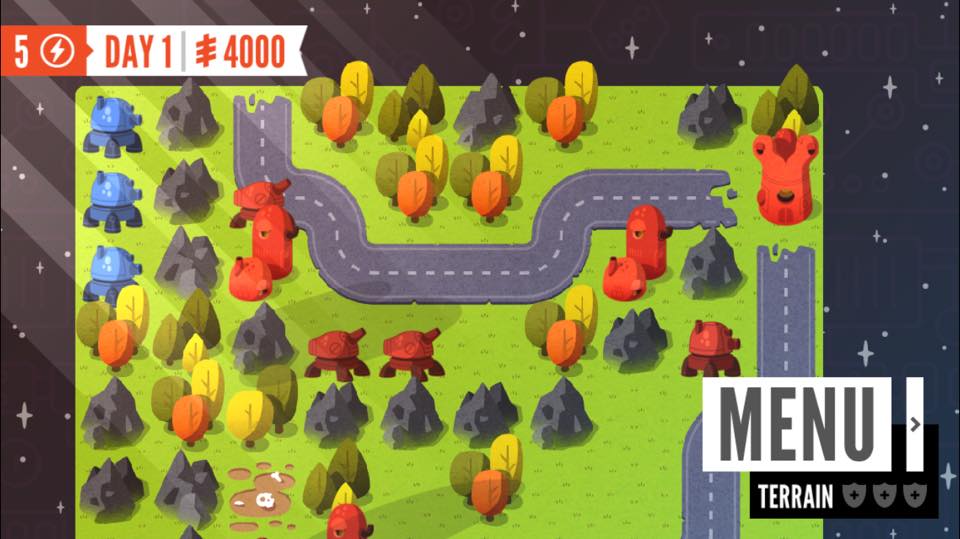 GGod hand - The gameplay is really well thought out. Warbits is a turn-based game that offers a variety of units based on type: infantry, mech, and air.

Each one has a unique advantage and weakness, as well as a specific movement limit and attack range. For instance, some can't traverse mountains, while others can fly over water.

Some have no weapons and can't fight back, however they serve their purpose in other ways.

Some units specialise against infantry and some against mechs or are anti-air. Figuring out the best counter against the enemy is the key to victory.

The maps you play on also change considerably based on terrain, forcing you to adapt your play style and try out different tactics.

It can also be used as an advantage as the game has a cover/defense system. Some tiles on the map give a defensive bonus, whereas others inflict a penalty and leave you vulnerable.

When a war drags out, you have to manage your army's fuel, health, and ammo which you can resupply at HQ, captured buildings, or airports.

The APC is a unit that can transport infantry and resupply them on the field. All of this combined makes Warbits an excellent game of strategy.

Matthew - Yeah, it's pretty fun. I do recommend it. The writing is cheesy, but it works. It's amusing and cartoony, and captures the feel of Advance Wars better than Front Wars, Great Little War Game and Rogue Planet. GGod Hand - Warbits has a good balance of macro and micro-management, which are the fundamentals that make up an excellent game of strategy. Kainen - Sorry, I'm still not feeling it. Maybe I don't get as much time as others to play, or maybe I have different standards, but it's just okay at best for me.

It has a few nice touches, and maybe if they had priced it at 79p, it would feel more worthwhile. It's just there are so many better games out there for less. It looks and plays like others, but it doesn't have the same pull, or addictive qualities. 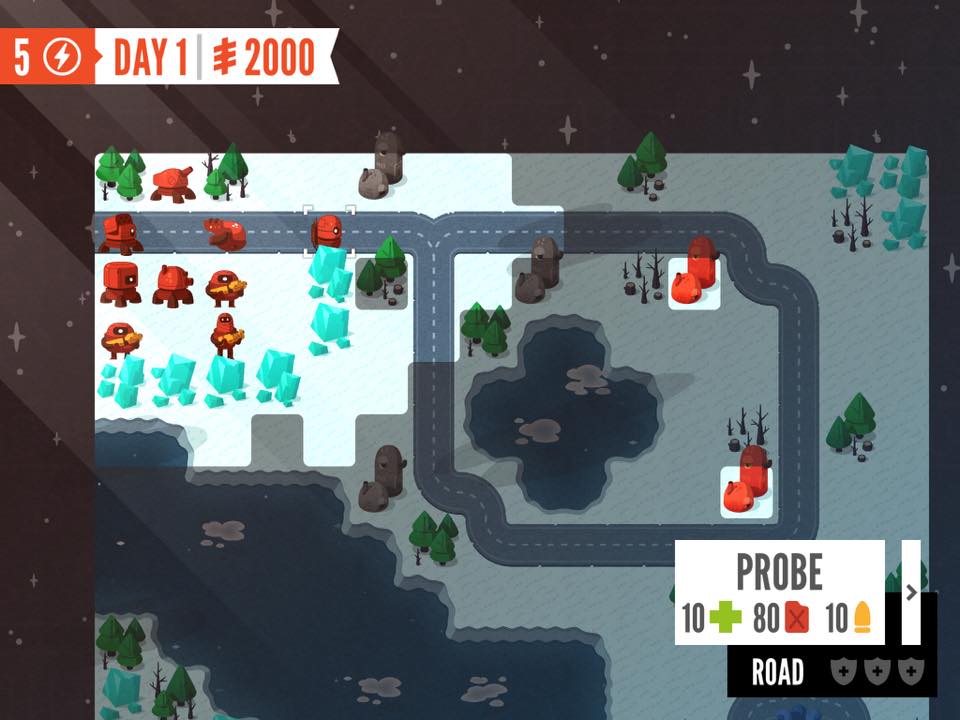 GGod Hand - Man, this is a Game of the Year contender for me! The campaign does an excellent job of introducing you to each unit.

It also does a good job introducing you to each terrain type and how they affect your troops in regards defence or visibility. While the first level teaches you the basics of movement and attacking, the rest is essentially a tutorial teaching you every other aspect of the game.

Aaron - What would you say is better, Kainen? Kainen - Perhaps the Great Big War Game. Also Warhammer 40,000. That was fun. Aaron - Oh, which one is that? Is there a turn-based Warhammer game on the store with armies? Kainen - Yeah. We actually played it for App Army a while back. Aaron - Ah, the Tyranid one? I was hoping there was a full-on battle game, I'd missed. Kainen - I also gave Hero Academy 5 stars.

GGod Hand - The last sector is a great challenge, and will require you to make use of everything you've learned. A few mistakes early on can cost you the game entirely. 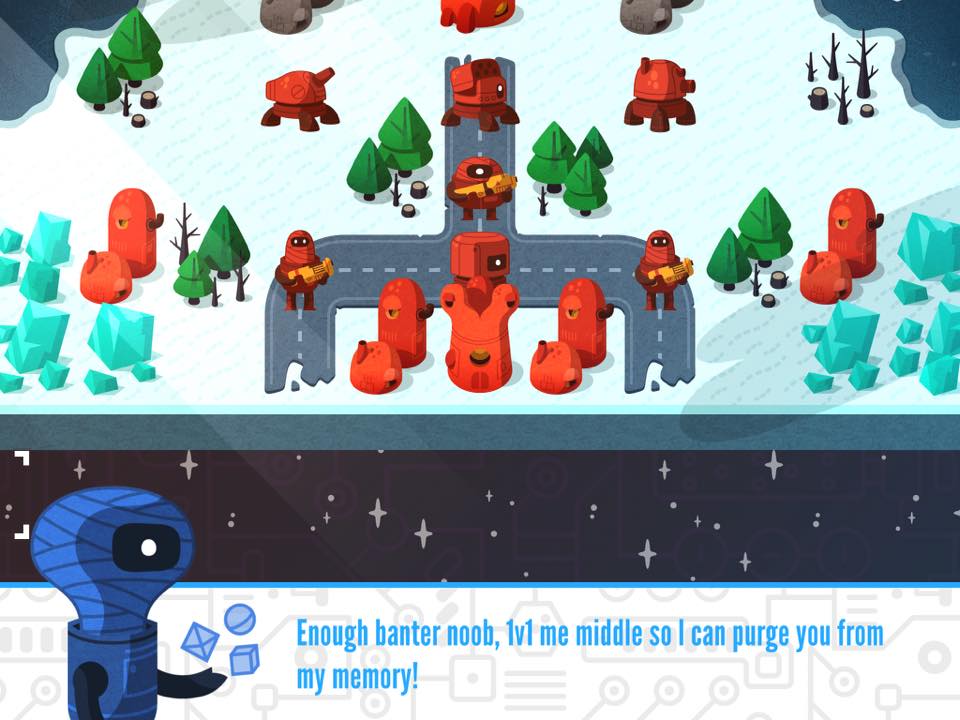 Quincy - The developers did a great job giving us everything we loved about Advance Wars. The gameplay is simple, yet fun. There's a storyline for those who need a purpose to the game, but also silly humour to add to the charm.

You control the battlefield by using strategy and cunning to properly target and destroy opponents.

The game is fun, and it does look great. It even adds a few modern features like battling real opponents and the fog of war.

There's just something missing that I can't quite put my finger on. Maybe it's because I'm a bit jaded from all the previous attempts at remaking Advance Wars.

It does have its flaws, but it's a nice trip down memory lane for a lot of us. These days, that's as good as you can hope for.

Chanadler - I'm finding that it's sometimes not easy to differentiate between units. I guess that slows things down, and forces you to take more time with each movement. If I remember rightly, the units in Advance Wars were very easy to tell apart. GGod Hand - The boosters add more depth to the strategy and are extremely helpful in temporarily gaining an advantage over an opponent.

Also, these campaign maps start to get really big.

Mike Smith - The game is legitimately great. The graphics are superb. The humour is pretty cool. The difficulty of the levels varies. Gameplay is 100% awesome. Would love to see a sequel or more games like this from Risky Labs in the future. GGod Hand - If you like Turn Based Combat, it's a must buy. If you like Advance Wars, then Warbits does feel like a spiritual successor in mobile form. The App Army have spoken! If you'd like to sign up, please have a gander at our App Army application article. Have you played Warbits? Is it a Game of the Year Contender for you? Talk to us in the comments.
Next Up :
Time Princess: Everything you need to know about the festive 2nd anniversary

Warbits whittles down to its lowest price yet

Warbits - Has war even been so much fun?

Get your Advance Wars fix: the amazing Warbits is finally out on the App Store