Virtua Tennis is the sort of game that lives or dies on its controls. They need to be so unobtrusive that a complete amateur can slot in 50p and win a few sets, but they must also accommodate the Wimbledon champ who knows the hidden secrets of lobs, slices, and drop shots.

The default controls in Virtua Tennis Challenge, which have you flicking and swiping across the screen to pull off all sorts of shots, achieve neither.

The controls are undeniably clever, letting you sketch your serves and slices onto the court itself, but they can be massively ineffectual and are often the root cause of missed shots.

Thankfully, there are a trio of virtual controllers to choose from hidden away in the options, and they are leaps and bounds above the awkward and fiddly gesture controls.

I had way more fun, and way more success, when I turned on a touchscreen approximation of a bulbous red arcade stick.

It's every bit as effortless, and deep, as the Dreamcast version that stole so many summers.

So, that takeaway moment of any Virtua Tennis game - forcing your opponent to lob the ball into the air, dashing towards the net, and leaping up for a ferocious match-winning smash - is as achievable, and richly satisfying, on iOS.

While the core tennis is strong, and the animations are as fluid as ever, the trappings disappoint. Perfomance isn't perfect (on the new iPad and the fourth-gen iPod touch, we noticed some framerate splutters) and its not awash with features.

The umpire strikes back

There's a world tour; singles and doubles exhibitions; and a bonus mode where the difficulty dynamically seesaws every time you win or or lose a point.

But, there's no character editor, no famous players, and no gimmicky training modes.

Multiplayer, too, is a bit of a dud. Crippling lag destroyed both Bluetooth and online play for us, and the randomised match-ups mean you can't play against specific friends over the web.

Virtua Tennis Challenge is a superb tennis game, which feels true to its arcade heritage and is barely hampered by touchscreen controls. It's just a shame that the package itself is so slight. 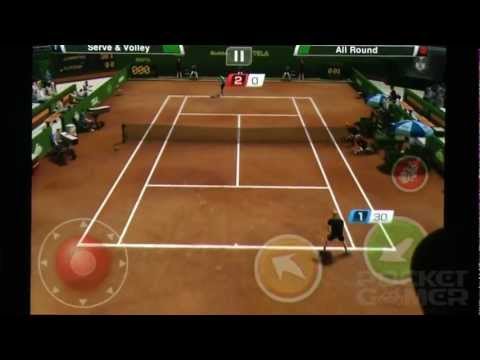 All the thrills and excitement of its console brothers, with surprisingly dependable controls. A lack of modes and almost useless multiplayer dampens the fun, though
Next Up :
Hero Emblems II review - "Lovely visuals and music, but match-3 combat lacks strategic depth"