The impressive thing about Total War Battles: Shogun is the way that Creative Assembly has taken the Total War franchise, stripped away layers of fiddly complexity, and still managed to deliver a sophisticated real-time strategy game.

There are still plenty of units to hire, each with its own benefits and drawbacks. But there are no stats to calculate, and no health bars to fret over. You can glean all that information simply by looking at your samurai.

Skirmishes are shorter, and much more focused. In this game strategy is about making the most efficient use of the cramped battleground. Buildings, for example, have huge footprints and are terribly particular about where they can and can't be placed.

Enemies march forward in distinct lanes, can only sidestep into adjacent tiles every so often, and can never turn back.

It means that Total War Battles: Shogun is mostly about shifting things around the battlefield with your finger, rather than getting bogged down in pages of stats, minutiae, and tiresome micro-management. In some ways, the game's closest relative is actually Plants vs Zombies, rather than Shogun 2.

But that's not to say it lacks tactical depth. You'll need to place buildings carefully, cunningly use lanes to sneak up on enemies, attack from afar, and exploit bottlenecks. Strategic smarts still apply, but the game's focus is just better suited to the touchscreen.

Not all of this accessibility is so successful. For example, not being able to spy the exact range of an archer or a cannon means you can inadvertently walk into danger. But for the most part the streamlining works well to give you strategy stand-offs that you can actually win during a ten minute bus ride.

Elsewhere, the tutorial is excellent, and new units arrive throughout the campaign so you're not overwhelmed at the start. There are also optional missions that are more puzzle-focused, surreptitiously teaching you the basics and giving you EXP that to make the game easier.

The main missions are linked together by a detailed story (delivered in text, and read out by voice actors), and the campaign should take about ten hours to finish. There's single-device multiplayer on iPad, which offers a very basic take on the game. It's fun, but not a major selling point.

The real draw of Total War Battles: Shogun is the way that Creative Assembly has managed to make an RTS that's eminently suited to the way we consume mobile games, but without losing the sophistication that makes this series so revered. 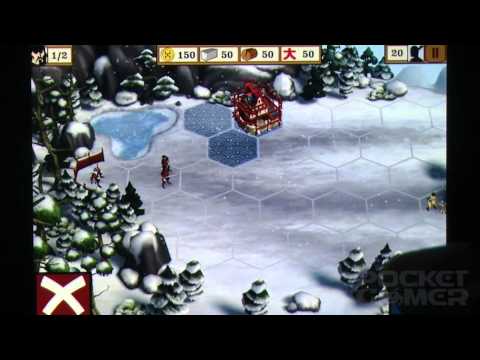 This high-quality production dramatically streamlines the RTS genre for mobile play, while making sure it's packed with enough tactical depth to make its many skirmishes tense and exciting
Next Up :
Netflix Oxenfree review - "Reading the signals of a thriller story"

Get Total War Battles: Shogun for 69p/99c on iOS - the cheapest it's ever been

No surrender: The making of Total War Battles: Shogun