The first two Tony Hawk games represent the pinnacle of cool for their generation. Every game that came out after the first two has added more and more clutter to those streamlined gems. Any skateboarding game that wants you to regularly get off your skateboard should, in our opinion, mind its own business.

And so we come to Tony Hawk's Skate Jam for iOS and Android. It might not have the dad-watched-MTV-once aesthetic of the mid-period TH games, nor thankfully does it require an extra peripheral to stand on like the atrocious Ride, but it still doesn't capture the almost effortless class of those original games.

You'll fall through scenery, you'll drop off your board for no reason, and you're going to miss button presses thanks to the slightly awkward way they're positioned along the bottom of the screen. But, and this is a pretty massive but, there is some fun to be had here.

Here I am, doing everything I can

The game sees you controlling a skater around a series of different levels. There are a number of different modes, but you're pretty much going to be doing the same thing in all of them - trying to get as many points as you can.

You score points by landing tricks. The more complex the trick, and the more tricks you combine together, the more points you're going to get when your wheels touch the ground. In multiplayer competitions there are other players, or at least their ghosts, skating around the levels - in single player you're on your own, obviously. 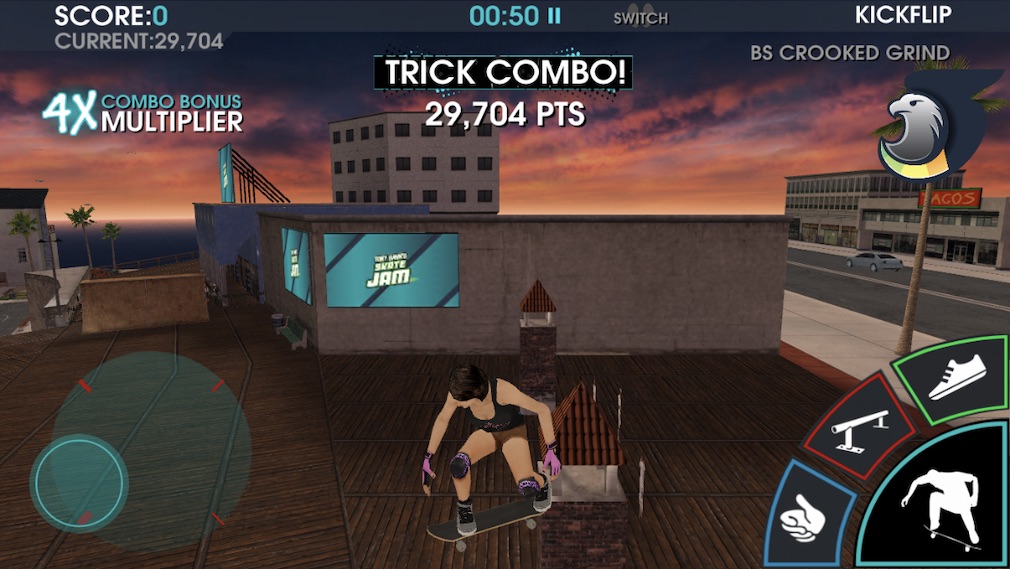 In single player things are a little more traditional. You get two minutes to roll around a level, and there area number of tasks for you to complete in each of them. You've got letters and markers to collect, tricks to pull off, and high-score markers to hit. This mode gives you a chance to get a better feel for what's going on in the game, and to work out the best places to pull off your awesome lines.

Tony Hawk's Skate Jam is a clumsy sort of a game. It wobbles along with some loose bearings, always looking like it's about to expire from exhaustion or disintigrate entirely into its constituent parts. It never actually does though, and there are times when you're going to be having a blast.

Sure it's clunky and badly balanced, but there are brief flashes of just how good the series used to be - finding a line connecting a wall, two benches, a tank, and a ramp, a bit of that classic Tony Hawk-muscle memory started to come back.

Holding on to what I am, pretending I'm a superman

The problem is that fun isn't the main takeaway from the experience. The camera here is sloppy, meaning some tricks you've got no idea which way you're pointing or if you're going head first or wheel first into the ground. Lines that look like they should work don't, and the lack of manuals is going to dishearten some too.

Then there's the Hawk mode. Get enough points and you can push a big button in the top corner of the screen to turn into Tony Hawk. For some reason his skateboard's on fire, but you do get a points boost when you're playing as the big T. The idea feels a little forced though, and when the game messes up an epic trick run and give you no points, you're going to be even more annoyed.

Tony Hawk's Skate Jam is a stodgy, lazy sunday of a game. But every now and then it turns on the style and makes you remember how amazing this series was in the first place. At that point you'll smile for a bit, and then get stuck between a couple of ramps and be reminded of just how far we've come since the days of Tony Hawk's Pro Skater.

A pretty average game with some brief moments of real joy, but far too many bugs and far too much frustration
Next Up :
Crux: The Great Outdoors review - "Looks can be deceiving'"