iOS + Android
| The Lord of The Rings: Rise to War

In our essentials Lord of the Rings: Rise to War guide we will cover the most important tips and tricks, which will be especially useful to new players. It is a real-time, geo-strategic seasonal mobile game with RPG elements that is now available for Android and iOS devices. For the fans of the series, but also for anyone who enjoys mobile strategy games in general.

Players and budding tacticians can select one of the available factions, forge their rings, form fellowships or warbands with fellow players, expand their cities by capturing tiles and raise the biggest possible army as they go after the One Ring.

In this article, new players will find a lot of information about the game, plus useful tips that will make the beginning of their adventure in Middle-earth easier.

There’s a lot of things to cover so without any further ado, let’s get right into it.

The Story of the game

Twenty equally powerful rings were divided among the factions’ Elders of Middle-Earth. Little did they know, Dark Lord Sauron forged the most powerful ring. A ring so great that could grant its wielder the power to rule the land. The One Ring to rule them all.

An all-out war began. Some factions tried to defend against Sauron, while others sided with him.

Which side you will choose? 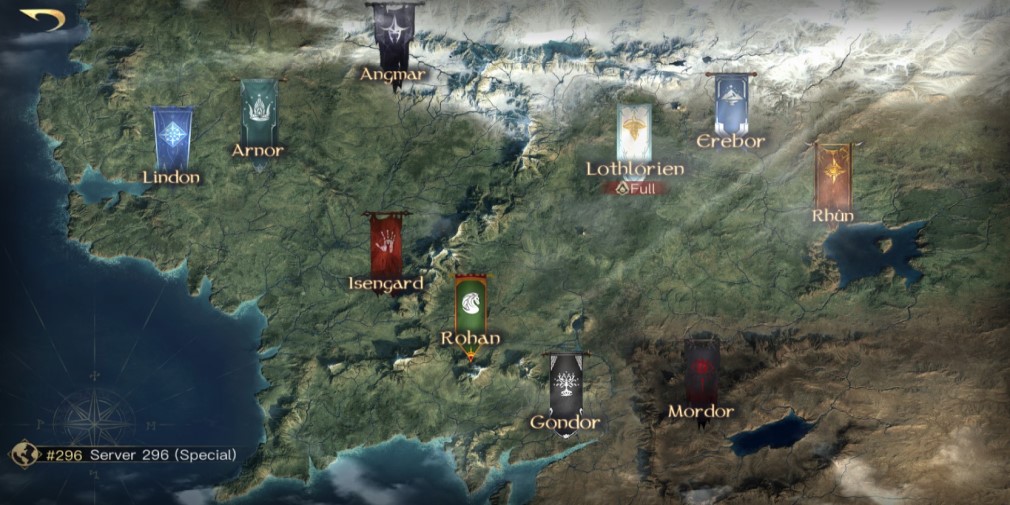 Based on the original story, factions are divided into ‘Good’ and ‘Evil’. That holds true in the world of Rise to War as well.

Each one has a unique spawn point on the map (city), can produce various types of units (armies), and also has a unique trait. For example, some can build structures faster than others, or produce units quicker and so on.

Every faction has its own unique Commander unit at the beginning of the game. Commanders are something like Generals. They lead other units assigned to them in battle and around the map. As they learn skills, they can provide buffs for their armies. More about them soon.

Something to keep in mind is that while players can recruit more of them, there’s a limitation. An ‘Evil’ Commander isn’t available for a ‘Good’ faction to recruit and visa versa.

On the flip side, factions that are located in remote places have less pressure during the early stages of the game.

Different parts of the map also give access to various types of ‘Neutral Camps’. Neutral camps are units that can be recruited by players, once players defeat them.

If you decided that you want to try a different faction, you do have that option. With that being said, players can change factions, but not sides. On top of that, there’s a penalty as you are going to lose all of your territories if you decide to switch. So it’s better to make such a decision early in the game than later.

There’s a maximum number of players allowed to each faction. Once that number has been achieved, no other players can select that faction. So depending on the state of the server that you are playing on, certain factions might not be available.

Of course that creates an imbalance of power, but hopefully, it’s something that will be sorted out in the upcoming seasons. 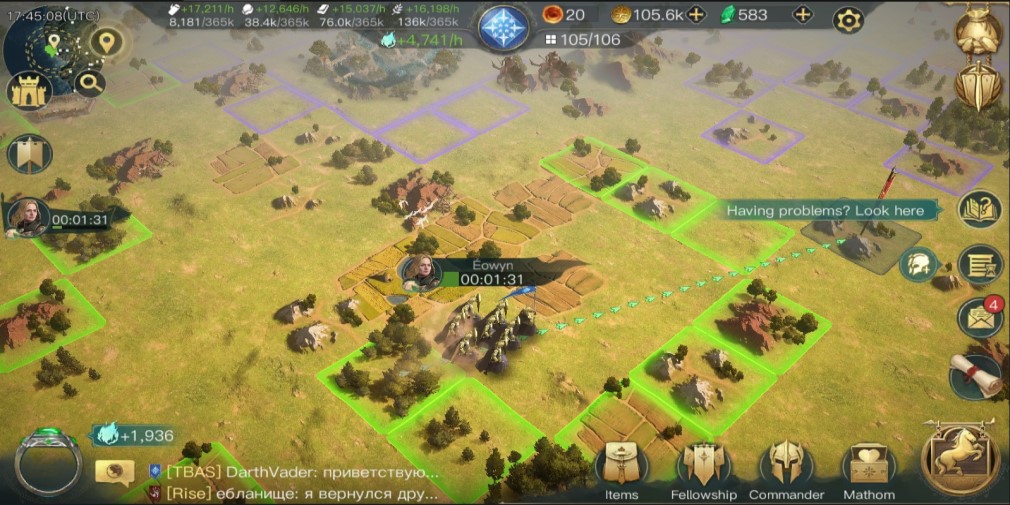 In LOTR: Rise to War, your territory equals the number of tiles you have under your control. By controlling tiles you earn resources over time and Ring Power. The amount of resources and Ring Power a tile can produce is based on its level. The higher their level, the more they produce.

There is a maximum number of tiles that you can control at the time. You can raise that number by raising your Ring’s level and completing the Main Line Quests.

How to capture tiles

Every tile has a number of defenders and that number depends on the tile’s level. In order to capture a tile, you must assign units to your Commander’s army and march them towards that tile. Again, the higher level a tile is, the greater forces you are going to need. For tiles with power greater than 130, it might take more than a single battle in order to capture them. 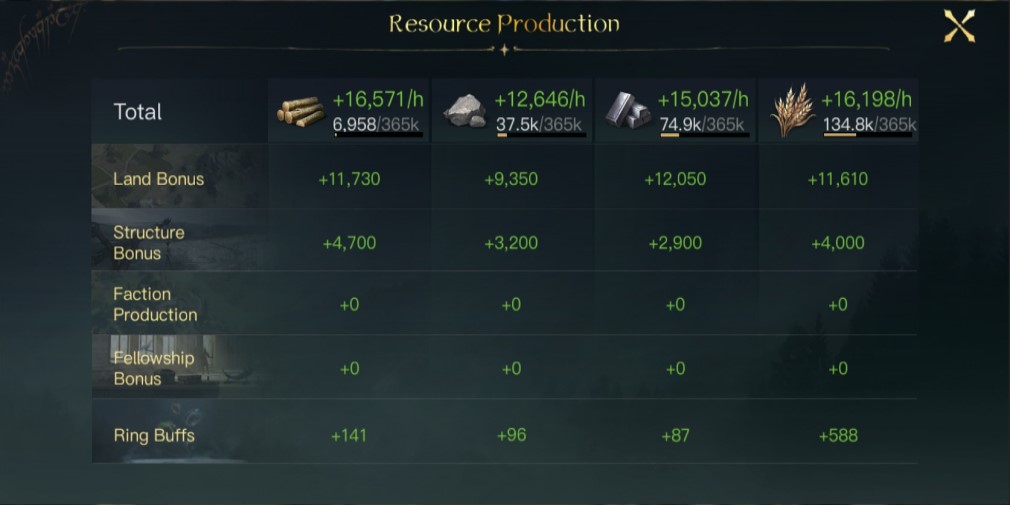 We could say that there are two main categories of resources: Ore, wood, stone and grain which is what you need to build and upgrade your structures, produce new units or heal the ones injured in battle. The other one is Ring power, which is what you need in order to upgrade your Ring’s level and learn new skills. Certain structures as well as the tiles you control can produce these resources per hour, but only tiles will give you Ring Power. During the early stages of the game, you are going to need a lot of grain in order to produce new units. As you advance further into the game you should try to balance their production as you are going to need pretty much everything. 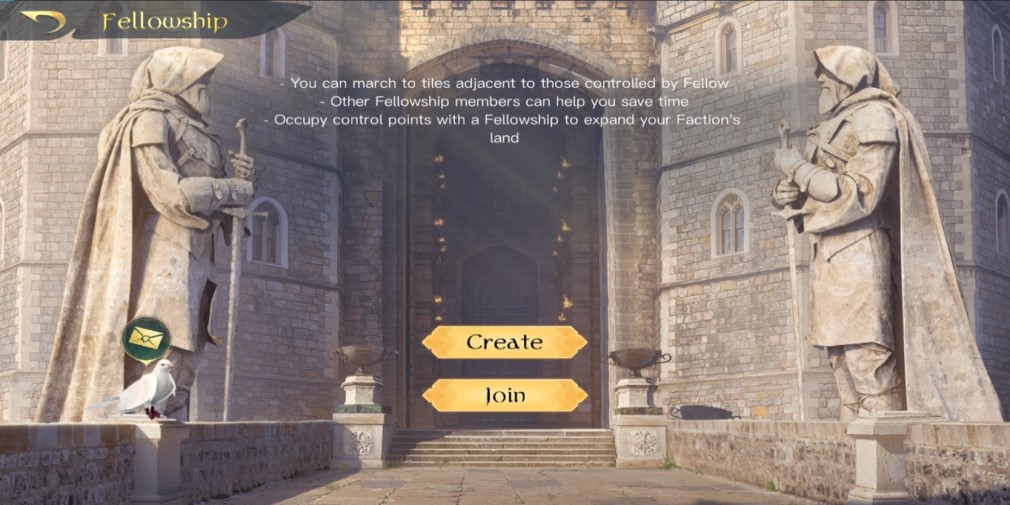 Fellowships or Warbands (depending on your faction) in Lord of The Rings: Rise to War is the equivalent of an alliance in pretty much any other MMORPG. You can join an existing one or simply create your own. With that being said, if you decide to join one, it is very, very important to find an active one. Why is it that important? Because you can gain access to Fellowships’ territory and you can also ask your fellow mates to help you out with resources when you upgrade your structures. Also read:

By helping other members, you gain contribution points that you can then use to buy items from Fellowship’s store. 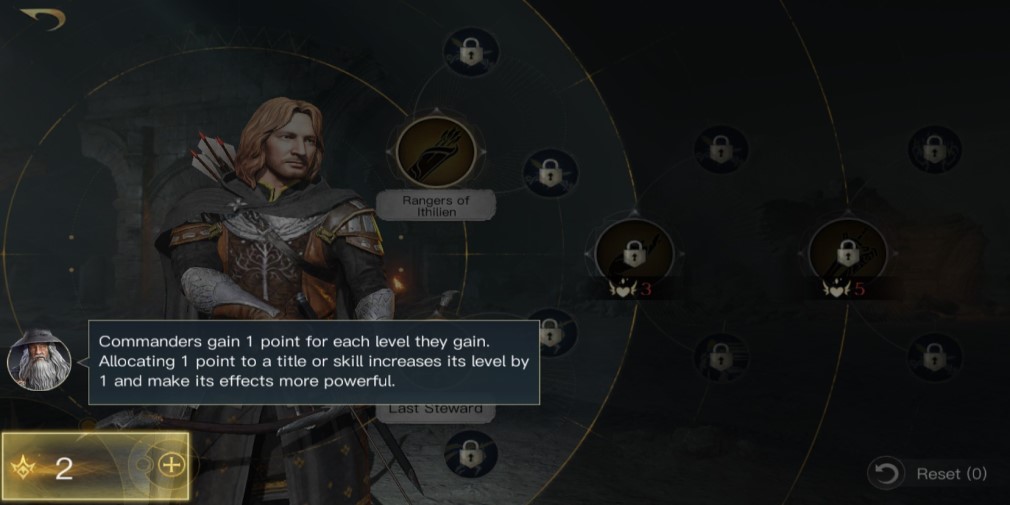 Whenever you want to move your units around the map to capture tiles, you are going to need a Commander to lead them. A Commander can have up to 3 different types of units assigned to their team. Every time they perform a task, they use stamina. Once their stamina is below a certain level, they cannot battle anymore until they regenerate it over time.

In order to recruit new ones, players must first earn their respect. That can be done by giving them certain items or completing tasks. Once their respect bar is full, they become available to recruit in the ‘Tavern’.

Every time they go to battle, Commanders earn exp. Whenever they level up, they earn points that can then be allocated to learn new skills. Those skills can increase not only their power but also the power of certain units. With higher respect levels, more skills become available.

There are three different rarities of Commanders. The higher their rarity, the more respect points you need to earn in order to be able to recruit them.

If you are a new player and your goal is to enjoy this game without spending real money on it, here are a few tips that will make your life easier.

Pick a faction that is located in a remote place so you can have an easy time during the early stages of the game. That will allow you to farm up and strengthen your armies without having to worry about enemy players.

Once you reach the maximum number of tiles that you can control, start deleting the lower level ones and start taking higher-level ones. During your first 24 hours, you have some very powerful buffs, try to take full advantage of them.

Do not use items to raise your Commanders respect level at the start. It is better to use these items to obtain a new Commander as fast as possible instead. By completing tips from the tavern, you can gain respect exp and also gears. The more Commanders you have available, the more things you’ll be able to do.

Focus on learning the Ring skills that can accelerate your Commander’s exp gains. After that, it’s probably best to go for the increased resources.

Completing the main quest line should be your priority, but at the same time, you can easily collect ‘Event’ rewards and also try to do as many weekly challenges as you can.

Do not spend much gold on Tier 1 and 2 units. Better save that gold for the Tier 3 units skills.

That's all we have in this LOTR Rise to War guide for beginners! We have a bunch of similar content, just click on the link at the top with the game's name, and you'll be in for a treat!

The Lord of the Rings: Rise to War adds five in-game events to celebrate the Yuletide season