For those who've played The Escapists before you'll know the gig pretty well already. As the name suggests, in this prison sandbox your ultimate goal is to escape. But it's the journey that's the most fun.

The Escapists 2 takes that well-tread and successful formula and puts a little more meat on its bones, making something good into something great.

It still has a few iffy sections here and there, but life in the slammer isn't ever perfect.

I ain't going back, man

The Escapists 2 starts off with a quick, narrated flashback as you and a pal are lying on a desert beach, recounting the story of your previous escapes.

You're thrown into a snappy tutorial where you learn the basic mechanics, run through a smaller-scale prison, and eventually get the satisfaction of escaping. Before getting caught again and sent back to jail. 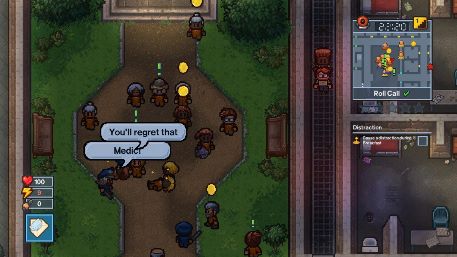 From here you're thrown into the game and have to take another whack at escaping a series of prisons which increase in difficulty as you go. Though it may start off simple, soon you'll find that patience, timing, brainsmarts, and planning will be your best friends.

Much like the first in its series, you've got to attend roll-call in the AM and PM, eat, work out, shower, do your job, and have a couple of periods of free time before getting locked in your cell at night.

The majority of your success in the game comes down to time management. As you learn after a few days, one of the best strategies is to turn up on time to your regular activities, then nip off to steal things, improve your skills, or complete favours for other inmates.

You need to harvest components to help you craft helpful items. If that requires you to steal from your neighbour's desks or unconscious bodies, so be it.

The crafting menu is larger than ever before and the combat system is much more complex, offering up a more detailed way to fight your opponents than just smacking them with a sock mace.

Adding elements like blocking and charged-up attacks may not seem like much, but it definitely adds another layer of complexity to a previously repetitious system.

Refreshed skill-based mini games also help break up the monotony, meaning that we have to work a little harder to build our intelligence, strength, and fitness. Though, remember to keep an eye on your stamina bar whether you're fighting, learning, or training.

I'll be out within the week

Thankfully its charm is untouched, and rather improved upon. With a newer, bolder art style, it still retains the recognisable look of The Escapists albeit with a bolder, richer flavour.

Both its personality and writing sticks the landing as you experience different characters, hilarious exchanges, and sometimes down-right bizarre conversations between inmates and guards alike. 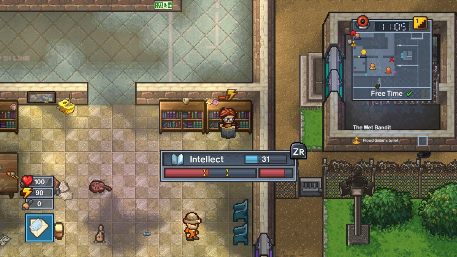 It's what makes the game feel lighter than its topic suggests. Between escaping prison, beating up people, sabotaging inmates, and generally creating havoc, you never feel like you're doing anything wrong.

Tonight there's gonna be a jailbreak

That's not to say it's faultless. The Escapists 2 still suffers from the same-old repetition as you wait for the perfect opportunities, and can on occasion feel overwhelming, especially in handheld mode where everything is so darn small.

There are moments where you feel like there's so much to do and so much to consider that your brain just shuts down. That's not so much a negative as something to keep in mind before buying if you're someone who doesn't want to be challenged.

It may not rewrite the code to bring us a totally new experience but for the asking price and for its awesome multiplayer capabilities, I'd say this is a must-have for strategy-lovers.

*Correction - the map editor is currently only available for PC*

The Escapists 2 improves on its existing formula, offering up another great sandbox experience with a little more bite
Next Up :
Nacon MG-X Pro Mobile Controller review - "A practically perfect mobile gaming controller"