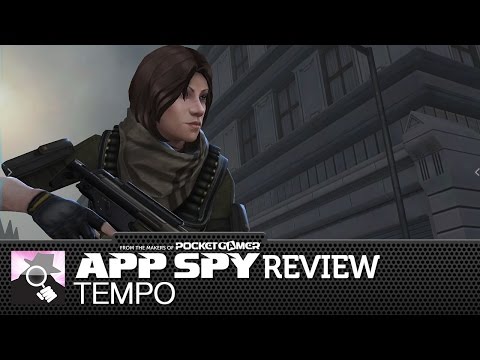 Tempo is a game about fractions of a second. If you wanted to be uncharitable you might call it an extended quick time event (QTE), but there's a lot more to it than that.

And it looks wonderful. The animations are pitch-perfect, the gunshots and explosions are precise, and the UI looks like it's been lifted from a futuristic Tom Clancy adaptation.

It might not be a pure-bred shooter, or really a shooter at all, but Tempo has enough going for it that it's worth more than a second look.

Tap to the beating

The game sees you playing a member of an elite counter terrorist unit who's fighting against a madman who's planted bombs all around London.

The game is broken into minute-long missions. A variety of tappy, swipey commands flash up on the screen and you need to complete them quickly to complete the challenge.

Fail two of these and you fail the level. Don't hit them all perfectly and there's a good chance you'll run out of time and fail the level. Tempo isn't exactly cruel, but it doesn't tolerate many mistakes.

You can use the cash you earn in-game to buy boosts that help out a little by giving you extra lives or time, and each agent has a special move that they can use once per level to even the odds.

The whole thing rolls along at a frantic pace, as you might expect with a name like that. There are boss fights, mines to disarm, and barriers to smash down with the butt of your gun.

And it all clicks together remarkably well. The time-chasing aspect makes for some frantic exchanges, and you'll likely swear aloud when you miss the last tap of a level by a hair's breadth.

Tempo might not be the game you're expecting, but it's a fun, engaging twist on the mobile shooter. And for that alone it deserves to be lauded.

A clever shuffling of shooting mechanics, Tempo might not let you pull the trigger, but it sprints along at a frantic pace all the same
Next Up :
PUBG New State review - "Not-so-new state, but still enjoyable nonetheless"

Hands-on with Tempo: Splash Damage's mash-up of Parappa the Rapper and G.I. Joe