Tears of Themis, miHoYo’s romance detective game, is heading for iOS and Android later this month

Genshin Impact’s creators miHiYo have announced the release date of their new Romance Detective game Tears of Themis. The game is set to globally launch on both Android and iOS devices on July 29th.

The game will be free-to-play and follows the story of a junior attorney starting their legal career alongside four distinctive male protagonists, each with a complex personality of his own. You work at the Themis law firm where you’ll solve unusual cases alongside your companions in the fictitious Stellis City.

It takes you through the entire case-solving process. Investigate the crime scene, question your suspects and witnesses to obtain testimonies and then fight to win your case in court. But solving cases isn’t all there is. As you solve more and more cases you will unlock secret dialogues, video calls, and character-specific stories by cultivating relationships with the boys, and soon you will uncover a that a sinister plot under all of this. It is up to you to make sure justice prevails. 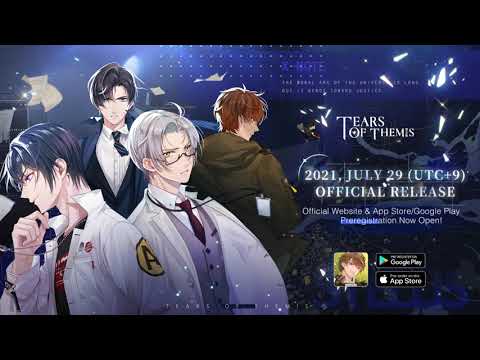 The latest trailer for Tears of Themis, Shattered Path, features some of the detective gameplay you will experience and objectives that you will need to complete. They include examining clues, gathering key phrases from people involved and then all that’s left is proving to the judge that you are right.

The official website also has a Shattered Path puzzle up on it and all players who finish 5 challenges will receive 180 S-Chips when the game launches on July 29th.

You can download Tears of Themis on July 29th from the iOS App Store and Google Play Store.

If you like detective games then check out our 25 favourite for mobiles.
Next Up :
Another Eden concludes latest chapter and adds new maps, rewards, and login bonuses for players