Kart racers have recently been on a little bit of a resurgence, with the blue hedgehog swapping up traversal by foot for a supercharged automobile once again. Team Sonic Racing boosts onto the scene changing up the traditional dynamic by making players work alongside their two teammates to earn the highest places in the race before combining their scores to see who triumphs overall.

It's a neat concept, and surprising that the idea is used so rarely because with Mario Kart unanimously seen as the juggernaut of the genre, this change up really lets the game stand on its on two legs.

Sonic, Tails, Knuckles, Amy, and co. receive invitations from a mysterious tanuki named Dodon Pa asking them to take part in a series of competitive races. Without a second's thought, the gang venture off before being joined by the expected cast of characters from the history of the franchise, including Shadow, Rouge, Big the Cat (rejoice!), Eggman, Metal Sonic, and more. 15 in total, which for the most part rounds out a solid roster. Though it's odd seeing Cream the Rabbit replaced by a number of Chao, as well as Vector randomly paired up with Silver and Blaze while his Team Chaotix pals (Charmy and Espio) fail to make the cut.

For better or worse the story is charmingly cheesy, if not a bit thin. Though for a kart racer its more than apt. Two strange decisions by the developers were made for this however – one specifically for the Switch. The opening cinematic has been left out altogether due to “size limitations”, which is a shame but if you're really that bothered it's only a YouTube search away. Next to this, is the UI design that leaves out story cutscenes whenever a player presses A to progress. Instead users must press Y to enable this, something that is overlooked.

Levels are frantic, fun and a treasure trove of past Sonic stages. Working in teams of three, racers can boost off or "slingshot" from one another by trailing teammates slip streams, meaning co-ordination is key to success. To help with this, players can offer up items (which arrive in the form of Wisps) to help lagging partners. Furthermore, there's an ultimate meter that when filled grants all three characters increased speed and resistance for a limited amount of time. 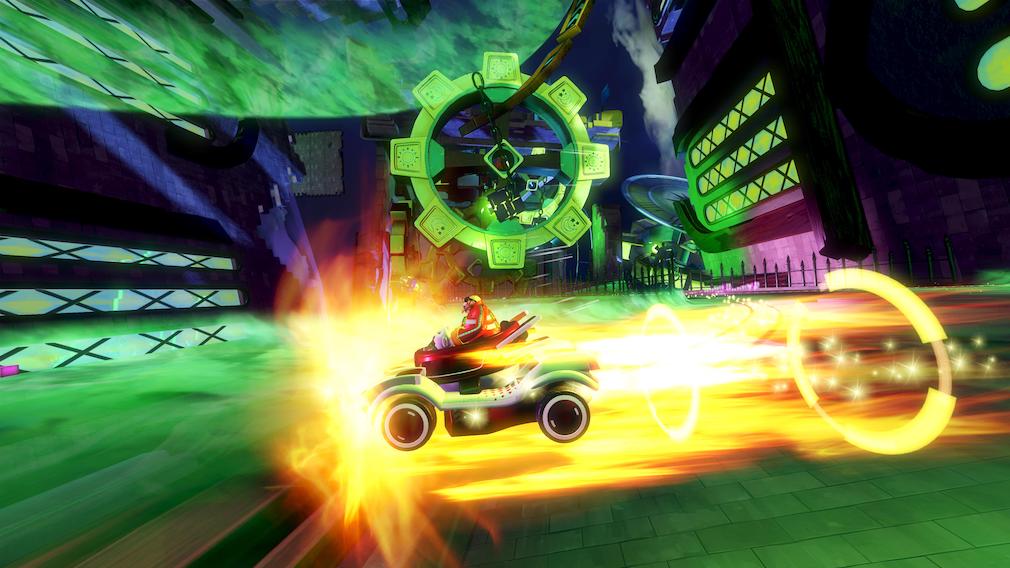 In addition to Team Adventure, Local Play, Player Stats, Garage and Online all feature. Though Nintendo is not known for its online, TSR surprisingly presented no issues with matchmaking creating a largely smooth experience. However, the inclusion of a few extra race options would go a long way to increasing its longevity.

One thing that TSR does better than most is customisation. It's wild how much detail and effort has been put in for each racer. Players unlock modifications and colour schemes through a vending machine known as Mod Pods. After a few hours of game time users will be swimming in tokens, so accessing the larger range of parts requires no great effort.

On the Switch, performance is capped at 30 frames per second as apposed to other consoles that offer up to 60. For the most part this isn't noticeable, however putting this side-by-side with the likes of Mario Kart 8 Deluxe and its blatantly obvious. Saying this, it does help transitioning to handheld mode where everything is clear, crisp, and defined.

A bug did sadly occur when racing on Ice Mountain in portable mode that emptied all the UI elements and froze (ironically) when the pause menu was activated - something that certainly needs thawing out. Apart from this, the 21 levels on offer all bring a great sense of variety while keeping things fresh.

Fans will be delighted that regular composer Jun Senoue returns to helm the soundtrack, with a stellar selection of remixes from the hedgehog's extensive library of music. The Doctor's Mine track for instance, is based off Planet Wisp from Sonic Colors but blends in a gripping F-Zero-like tune while adding a splash of Metal Harbor from Sonic Adventure 2.

There's even the obligatory nineties style Crush 40 theme tune to give the kart racer more legitimacy, not that it needed it. Truly this soundtrack is a love letter to all that has come before.

Pulling up to the starting line and Team Sonic Racing turns up in fine form. Differentiating itself from competitors on the market was a genius play, helping both thrive off their own qualities. Some teething issues are present and the longevity of the title may be up for questions but no doubt the introduction of team play makes strategizing part of the fun.

All in all, the fast gameplay loop rolled out across the terrific selection of stages will make any fan of the blue blur smile from ear to ear.

Sonic Team Racing's characters, soundtrack and level detail are a love letter to fans. It doesn't take the championship, but it deserves a podium finish
Next Up :
UFO99 review - "A fun little arcade game on the go"

The latest Team Sonic Racing trailer is all about team work