I've seen Tacticool on and off for a few years thanks to its appearances at our Big Indie Pitches, and it's been great to see how the game has changed over that time. Where before it often seemed a little barren, this final release build is a tight and taut multiplayer shooter that strikes almost all of the right chords.

Sure it's a bit dull on the eyes, but this is a military shooter, and if you're making one of those everything has to be painted in shades of grey and brown. And where it really matters - the action - Tacticool gets everything just right.

It might have a really bad name, but don't let that put you off - this could well be the sleeper mobile hit of 2019.

The game sees you taking control of a soldier. You're part of a team, and you're trying to score as many points as you can within a time limit. The first team to a hundred, or the team that's in the lead when the clock ticks down, is crowned the winner. Get your rewards, toughen up your soldier, then jump back in.

You're viewing everything from a top down camera angle, and you've got a stick to control your movement and one to control your aim. When your reticle comes to rest on a foe you'll open fire automatically. You've got grenades and special weapons at your disposal for when things get a bit too hectic as well.

There are a few twists here that keep things interesting. For one thing, there's friendly fire. I've been run over, blown up, and chopped down by heavy machine gun fire during my time with the game, and that's just by the players that are supposed to be on the same side as me. 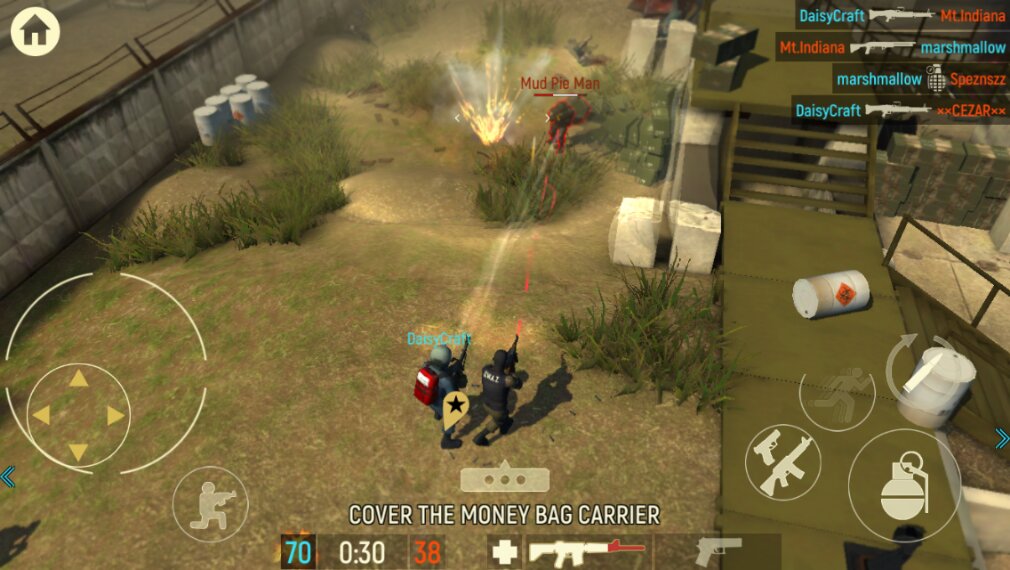 It keeps the game moving, too. Desperate last stands and sudden, stylish recoveries happen all over the map. And you're never too far from the next choke-point or shoot out. The violence rolls along with slick precision, and you never feel like you're too underpowered to make a difference.

There are other twists too, like scenery that explodes at certain times, trains that can crush you if you're not paying attention, and mutant zombies that are only too happy to throw a flesh-eating spanner into your best laid plans.

Every match it feels like something cool happens. In one game I jumped into a truck, drove over half of the enemy team, grabbed the money bag, and then took up a sniper position on a precarious ledge - and it all happened within the space of a few seconds. This is a game that understands how to deliver significant but small packages of mobile entertainment.

The only black mark against the game at the moment is that it does get a little repetitive during long play sessions. Hopefully that's something that post-launch content is going to correct over the coming months though.

Where other shooters have tried to get bigger in response to the battle royale takeover, Tacticool keeps things small. Every shot here matters though, and the sharply focused action is a brilliant fit for gaming on the go.

Tacticool is a brilliant game, and we hope to see more of it in the future
Next Up :
Warhammer 40,000: Tacticus review - "An approachable strategy to a grimdark future"