Nintendo have detailed Super Smash Bros. Ultimate's version 3.0 update. It's a free update which will release tomorrow, and will launch alongside the first challenger pack which centres on the Persona series, specifically Persona 5's Joker.

The free update, however, is stuffed full of new things and adds a lot of community features to the popular brawler.

Firstly, Smash Ultimate will be receiving a stage builder. It's not the first time the series has had a level creator, but it's definitely a lot more fleshed out than the Brawl version. Players can use the Nintendo Switch Handheld Mode to draw platforms onto existing backgrounds, they can also add in moving elements and background effects using a layer system. These effects can deploy as the battle proceeds — so you can create levels which transform as the fight goes on. 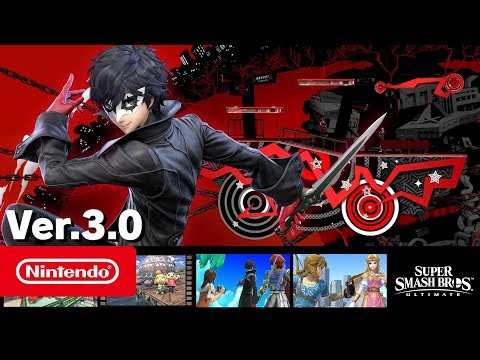 In addition to the level creator there's also a video editing option. You can carve up and splice together video from your fights, making your own short trailers. The editor looks quite intuitive and includes transitions, music selection and the chance to upload and share your creations.

As a matter of fact, Nintendo have suddenly become extremely embracing of online with the 3.0 Update.

Nintendo's smart phone app (the one we have to use for voice chat) now includes capacity to share your Mii creations, level creations and video creations. This feels extremely new for Nintendo. I was only recently talking to a member of the company while at a Labo VR event and when I asked about the sharing of games made with the included software, they replied that they wouldn't be able to ensure it was family safe and so couldn't put the feature in.

Now however, you can literally design a level, upload it, and then people can use the app to rank and queue a download for your level while sitting on their phone. That's really cool.

Also included is the chance to test out the levels before confirming the download on the Switch. I quite like the idea of this, not least because the showcased custom level screen (12:16 in the video) only showed eight tiles — although this might change when more are added.

In addition to this the app will allow you to redesign your spirit teams on the fly, if that's your kinda thing.

The Super Smash Bros. Ultimate version 3.0 update launches on the 18th of April.