iOS + Android
| Super Mario Run
Updated March 23rd, 10:20 - Now that the Android version is out it's clear to see that Super Mario Run hasn't changed between the platforms. All of its content is still just as fluid and its features and design are just as clean as the iOS version.

Sadly it still lacks replayability once the game's done and dusted, but we knew that already. 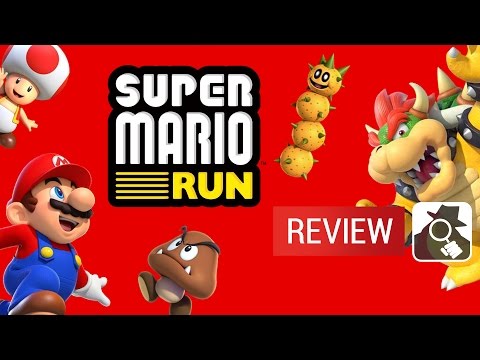 Subscribe to Pocket Gamer on
It's impressive just how much Super Mario Run manages to capture the magic of a Mario game - despite stripping away an enormous part of the original formula.

That part being: the ability to control Mario's movement. In this game, the world's most famous Italian plumber runs along automatically (and leapfrogs over low platforms and even enemies), leaving you only in charge of his signature springy leap.

You can do a quick hop with a tap of the touchscreen, or a giant jump by holding down for longer. You can ping off walls to zig-zag up to higher areas, spring off an enemy's head, and stall in mid-air to manage your descent.

The end result is that you feel like a Mario speed-runner: determinedly holding the "run" and "right" buttons and bouncing from platform to enemy to P-switch without a moment to look back or breathe. It's exhilarating in its speed and relentless.

But, okay, that could describe any number of endless runners on the App Store. What makes Mario better is the level design. These stages aren't randomly cobbled together by a clever algorithm, but handcrafted by proper Mario designers.

They match the speed and fluidity of the game perfectly, with loads of opportunities for balletic movements as you carefully bounce from goomba to goomba, or slide down a mountain on your butt, only to rocket off through a string of shiny gold coins.

Every level has its own idea and focus: from quirky ghost house puzzles to an endless stream of buzzy beetles, to cannons ripped out of Donkey Kong Country, to spinning saw blades that chase you through claustrophobic spaces. Ideas are introduced, toyed with, and often thrown away.

There are only 24 levels (barring some bonuses), but you'll want to return to these again and again because getting to the goal is just the beginning. There are online leaderboards, plus each stage is also littered with cheeky pink coins and you need to nab all five in one go.

Come back after that, and the stage is filled with purple coins which are even harder to grab. And once more, for the black coins. Getting all coins on all levels is going to be the true test of a Mario super fan.

You will need to learn the levels, nail every jump, make smart use of pause blocks - which stop Mario in his tracks, giving you a chance to let platforms and enemies move to the right spot - and your two bubbles - which let you drift back to an earlier part of the level.

Ultimately, Mario feels more technical and exacting than the knockabout silliness of most endless runners - including the excellent Rayman games. This is a game you will play with your iPhone in a white knuckle grip as you execute every jump and hunt down every coloured coin. Fun, yes, but also challenging.

Even more so in the Toad Rally game. Here, you race in a looping stage against the ghost of another player, and compete not just for coins and speed, but the admiration of Toads who are impressed by special jumps and moves.

These are new moves in Mario's repertoire, like rolling out of a big fall, jumping while vaulting over an enemy, or somersaulting out of a mantle. It makes the game more engaging, and you start to pull off these mechanic movements with the same unthinking muscle memory as kick-flipping out of every grind in a Tony Hawk's game. It just feels fab.

Toad Rallies give you Toads, which are part of a weirdly complex economy of coins, tickets, and Toads. It all feeds into a simple kingdom-building game which is pretty pointless, other than the ability to unlock extra levels and characters - like Yoshi, who has his flutter jump.

It's a good mode, but a silly decision to let players earn more coins if they are a higher level kinda defeats the point of the competition. It should be a level playing field.

Anyway: Super Mario Run is not, as some feared, a simple cash-grab or an advert for the 3DS. This is a proper Mario game, with the feel, the fluidity, the imagination, and the depth of a fully-fledged Nintendo release.

It is a game where the designers thought carefully about how to translate the bouncy thrills of Mario to a platform without buttons or a d-pad and came up with something special: a deceptively simple game that serves as a full-bodied celebration of Mario's genre-defining jump.

A thrilling celebration of Mario's jump, packed with imagination and sharp level layouts. One of the best auto runners around
Next Up :
Hero Emblems II review - "Lovely visuals and music, but match-3 combat lacks strategic depth"