The term ‘money for old rope’ has been uttered more than once in connection with Capcom’s policy of continually releasing incremental updates for its games.

Back in the ‘90s, the Japanese developer was infamous for this practice - not a month seemed to pass without another new arcade release boasting improvements so subtle that only an expert could detect them.

Time may change many things, but it doesn’t seem to have dulled Capcom’s appetite for squeezing profit from its evergreen franchises – as Street Fighter IV: Volt Battle Protocol proves perfectly.

What we have here is a superficially updated edition of the already popular iOS interpretation of Street Fighter IV. At first glance little seems to have changed - the character designs and backgrounds are the same, and the game controls identically.

Using touchscreen controls, Street Fighter IV: Volt – like its forerunner - does a surprisingly good job of replicating the intense and precise bouts of the coin-op and home console iterations of the game.

Each character is blessed with a range of special moves, most of which are executed by stick movements and button combinations. The game engine is lent additional depth by the presence of throws, ‘focus’ counter-attacks, and devastating ‘ultra’ combos.

Granted, a virtual stick can never be quite as accurate as a physical one, but compared to other fighters on the App Store this is the undisputed champ when it comes to providing the authentic one-on-one combat experience.

Elsewhere in Volt, you’ll find three new characters to play with. Cody, Balrog, and Vega bring with them new skills and tactics to master, and the additional variety is more than welcome.

Also new to Volt is the Wandering Warrior mode, where you create an avatar and gain experience as you battle through the game. It’s a neat little side-order to the main course, so long as you don’t expect too much else.

By far the most significant addition to this update is the ability to play against other people online. The previous iOS version of Street Fighter IV was restricted to local play only, and this understandably limited its appeal.

However, it also ensured that contests were silky-smooth and mercifully lag-free – something which unfortunately cannot be said for Volt.

We noticed a crippling amount of latency during some fights, and as any hardened fighting game veteran will tell you the moment you lose that vital responsiveness is the moment a game’s appeal dramatically withers.

Even if the online side of things was perfect, we’d still struggle to recommend Street Fighter IV: Volt. Capcom did a great job of supporting the original game via regular (and free) App Store updates, and while we can understand the company’s desire to earn a bit of additional cash for its efforts, Volt most definitely feels like it should have been an update rather than a standalone release.

The new content isn’t enough to really justify the steep price, and the online multiplayer – which is essentially Volt’s USP – is flawed and plagued with lag issues.

If you’ve yet to purchase the first iOS version of Street Fighter IV, then this is obviously the one to go for, but it's a marginal improvement. 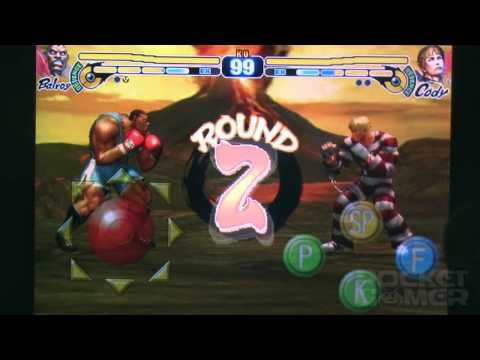 With time we hope that Capcom can nail down the problems affecting net play, but as it stands Street Fighter IV Volt is best appreciated by newcomers and should be approached with caution if you already own the original release
Next Up :
Hundred Days review - "A success for the management genre"