Switch
| Stick It to The Man!

If you're looking for a platform puzzler with a cool art style and gritty, darker humour, you'll likely want to keep on reading.

No, having originally slipped out in 2013, Stick It to the Man! isn't a new game, and it's been on more platforms than a 70s show queen.

Does that make it any less enjoyable? Of course not. It's a decent experience, albeit with a few things amiss, but it's still well worth checking out.

The game follows a spiky-haired chap called Ray, a hardhat tester at a construction site, after he's bonked on the head and knocked out by a mysterious item.

For the obligatory tutorial level, he finds himself in a weird and wonderful dream where he has a pink spaghetti arm coming out of his head, and multiple tasks and problems to solve. 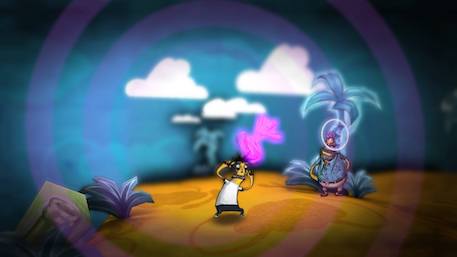 When he wakes, Ray finds it's no dream and that he really does have both a spaghetti arm and cool new powers to go along with it.

Unfortunately, a bunch of bad guys are after the stuff that's gotten cosy with poor, old Ray, and he has to escape, evade, and tactically work his way out of numerous sticky situations with the men in black.

With one trigger you can use a level's drawing pins to pull yourself to different platforms, and with the other you can read the minds of a variety of characters.

The mind-reading expands further than just hearing unspoken thoughts. Sometimes you're given stickers to use against the people who's brains you probe. For example you might be able to make them fall asleep for a short period.

You can also find a bunch of stickers throughout the level to help you solve a variety of puzzles. This gives things a classic point-and-click adventure feel as you work your way through the problems.

Of course, the designated stickers each have a particular place, so you can't just go throwing them out willy-nilly. That's a bit of a shame. It would be nice to see a little bit of a flexibility in this case.

The paper cut-out-like art style is also very effective and charming, especially how you're resurrected and printed out whenever you die.

You can pull back sheets of paper from buildings to reveal new areas and people to interact with which, again, emphasises the feel of the art style.

Though it's a fun and amusing game, it's not a particularly long one, clocking in at 4-5 hours long.

Although that length of time is ideal because the game is unapologetically linear. You have set chapters to work through, set tasks to complete, and set dialogue to uncover. 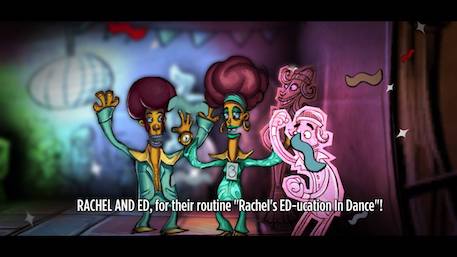 Your only choice in the matter is whether to read everyone's minds and whether to listen to all of the dialogue. Even if you're not so keen on spending time listening to each individual, you're given the option to skip cinematics and fast-forward the chit-chat.

Despite its striking, contrasting, and colourful aesthetic, the game holds some pretty dark themes which might not be suitable for everyone.

Whilst I found that the content fit the overall game, others may not see scenes of suicidal thoughts, dismemberment, or cannibalism to be particularly appealing.

Looks can be deceiving

Stick It to the Man! is a truly excellent port, and while it doesn't offer anything different up to those already familiar with the game, newcomers are going to enjoy it.

It's easy to get into, easy to pick up and play, and generally twisted if you're looking for a bit of a distraction. It's not perfect, but it is a bit of fun for a little while.

Stick It to the Man! won't be for everyone, but it's a super solid port, has a great art style, and offers up a good mix of platform and point-and-click gaming
Next Up :
REDMAGIC 7S Pro Supernova Lords Mobile Edition review - "A true powerhouse dedicated for mobile gamers"