inkle Studios will bring Sorcery! gamebooks to life on iOS

The group behind the Frankenstein remake for iOS, inkle Studios, is turning to the classic adventure gamebook series Sorcery!, for its next iPhone and iPad game.

Due in 2013, the four-book series will combine the interactive storytelling of the books with spellcasting mechanics redesigned for touchscreens and all new combat. Dice rolls replaced by an "innovative" new system.

Sorcery! was written by Games Workshop and Lionhead Studios co-founder Steve Jackson, and was first published in 1983.

Both Jackson and inkle are making clear that the new editions aren't just nostalgic treats thirty years on - but promise a game "extensively expanded from the original, allowing you to explore the world of Sorcery! as never before."

You'll "visit every location, talk to every character, outwit every monster and trap." 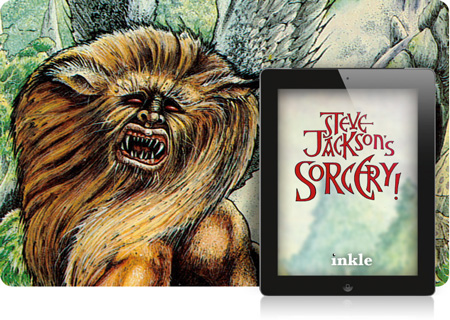 The plot remains the stuff of classic gamebook adventures, though, tasking you with recovering the Crown of Kings before someone else presumably does dastardly things with it.

The first book of Sorcery!, The Shamuntanti Hills, is due out on iPhone and iPad in March 2013. Kharé: Cityport of Traps will follow in the summer.

Next Up :
Super Planet is secretly testing Zio and the Magic Scrolls on Android