Choose your own fate next month in Steve Jackson gamebook RPG Sorcery!

Inkle has confirmed that its mobile re-imagining of Fighting Fantasy RPG gamebook Steve Jackson's Sorcery! will land on iOS next month.

Due to arrive in four instalments - first of which is subtitled The Shamuntanti Hills - this digital interpretation of Jackson's 1984 gamebook series aims to give the old-skool text adventure a new lease of life.

No longer limited by the constraints of ink and paper, Inkle has been able to bring the world of Sorcery! to life with 3D maps, and combat systems designed exclusively for touchscreens.

As with the books, you'll often have to make choices in Sorcery! - all of which will affect the outcome of your story. 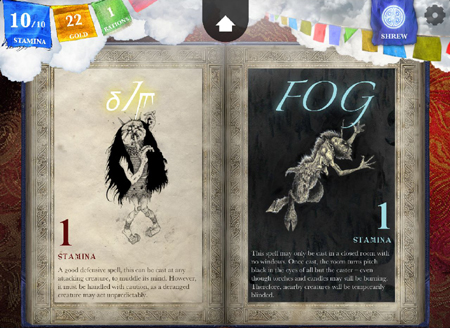 The land of Khakabad is teeming with dangerous creatures, however, so you'll need to master both Sorcery!'s sword-duelling system, and touch-optimised spell-casting mechanic.

Fight well and choose wisely, and you might just get your hands on the elusive Crown of Kings. Drop your sword and choose poorly, and doom awaits.

You can grab Steve Jackson's Sorcery! - The Shamuntanti Hills from the App Store in May. The second episode, subtitled Kharé: Cityport of Traps should appear this summer.
Joystiq