Stardew Valley isn't your typical farming simulator. Sure, you can plough and seed and harvest, but there's so much more to it than that.

Like the PC version it's addictive, charming, and distracting in all of the right ways. Except now that it's portable.

It doesn't get away with a totally clean slate though, since there are still a few problems here and there, but it's still a cracking experience for Switch-users.

After designing your own character and inheriting your late grandfather's farm, you up and move to Stardew Valley from the city to help breathe life back into the place.

Upon arrival you're greeted by Mayor Lewis and Robin, the town's local carpenter, and you can see from the state of the place you've got your work cut out for you. 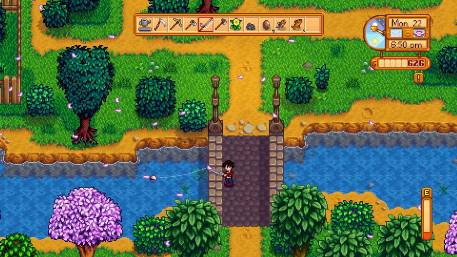 If you're not too keen on just working on a farm day in and day out, you can also forage, fish, and explore the slime-filled mines north of the valley.

Aside from making your farm all pretty, you've also got to nip around, introduce yourself to all of the townsfolk, and gradually nurture a bunch of great relationships. From casual friendships to a potential husband/wife.

There are four seasons to play through yearly, each with its own set of birthdays and special events to attend. These seasons also affect what you can grown on the farm, what you can forage, and what precautions you have to take for your animals to be at their happiest.

The visuals are on-point and instantly melts your tension as you turn the game on. The beautiful bit-graphics are bright, nicely designed, and change with the season.

The audio could use a little tightening as it's not as refined or detailed on the Switch. You'll find there's a little more track looping and the ambient, environmental sounds aren't perfect, but that's a teeny detail.

Though the game's controls are easy to understand, it takes a little while for you to fully grasp every aspect and trick. You need to avoid over-exerting yourself, manage your time effectively, and when in doubt just fish.

The fishing itself has been improved. Trying to hook a Sea Cucumber, Catfish, or tricky Pufferfish is still hard, but mashing the 'Y' button on a controller is definitely more efficient.

The portability is also a key factor in your enjoyment of the game. The Nintendo Switch's handy 'Stand-By' mode means whatever you're doing, you can pause the game, shut the console off, and then return to it later rather than play through a full day to save. 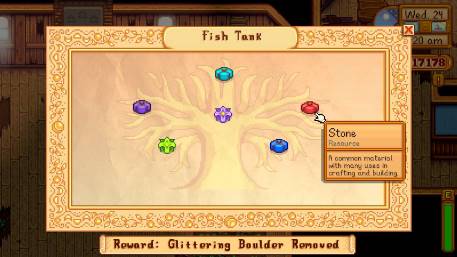 There are some technical issues at the moment but very minor ones in my experience. One of them is displaying the wrong names when in the run down alien/achievements house, but that can be fixed by exiting out and re-entering.

I've had the game crash on me a couple of times , though I'm certain at least one time it was because my Pro-Controller was trying to connect to it simultaneously.

Stardew Valley is as excellent as it's ever been. In fact, twinned with the Switch's portable capabilities I'd say it's at its finest.

There are a few little niggles here and there, but nothing major that really detracts from the enjoyment of the game.

If you love character and relationship-based games and farming simulators this is an absolute must-have. Heck, it's a must-have even if you don't.

The charming RPG Stardew Valley is so much more than just another farming simulator and feels right at home on the Switch
Next Up :
Otaku's Adventure mobile review - "A truly bizarre love triangle"