Hands-on with Star Wars: Tiny Death Star - it's no moon

The Death Star is a moon-sized space station that's manned by about a million crew members and packs enough fire power to destroy an entire planet with a single shot.

The question is: how did ultimate evils Darth Vader and Emperor Palpatine pay for such a comically oversized project? Second mortgage? Secret meth empire? Bank robbery?

Well, according to NimbleBit's upcoming Tiny Tower spin-off Tiny Death Star, Vader and co earned the funds by littering the super weapon with luxury apartments and retail outlets, and got the occupants to foot the bill. 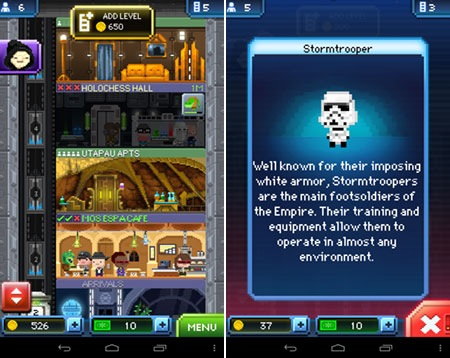 In the game, you play as Vader - now moonlighting as property tycoon, store manager, and elevator operator - as you build the Death Star and boost your funds.

The actual gameplay is almost identical to Tiny Tower. You add new homes for Bitizens, and encourage them to get jobs in your various businesses. You then need to keep those businesses stocked with items, until you've made enough money to afford the next level.

You also run the elevator, and manually take Bitizens to the level of their choice. You might also be able drop off VIPs at certain levels to immediately buy out all the stock in one business or speed up the construction of a new room. 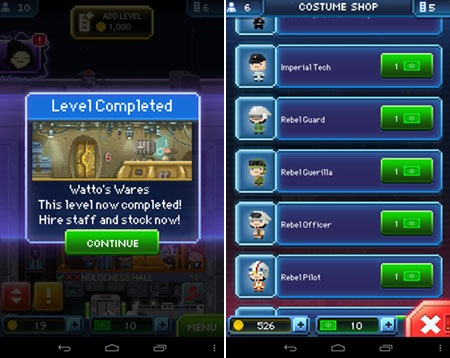 Now, however, everything has Star Wars graphics, references, and puns. So you'll build a Holochess Hall instead of a Casino, your cafés are visited by stormtroopers, you'll stock womp rat stew, and the game plays the Mos Eisley cantina ditty when a new Bitizen moves in.

Even the BitBook - that silly Facebook parody from Tiny Tower - is here, but now it's called Holonet and it's peppered with Star Wars references.

There are some changes for this spin-off. You now get quest missions from the Emperor, for example, and the game has a deep collection aspect where you can keep an album of Bitizens, rooms, and even little slapstick comedy scenes.

You'll also, eventually, be able to build imperial levels beneath the Death Star, which allow you to interrogate people and create star maps and other nefarious deeds. And you might have to capture Rebel spies, including series heroes Luke and Leia. 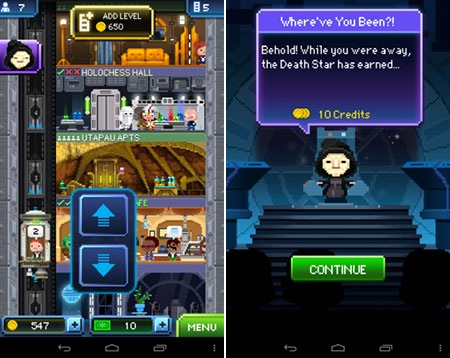 But these new features don't change the fact that Tiny Death Star is, much like Tiny Tower, "check in" gaming. It's not exactly taxing and there's not much skill or strategy involved. The game is simply about coming back every few minutes or few hours to tap on things and keep the money coming in.

Plus, everything is on wait timers, so you'll have to leave the app or start paying real cash to keep playing. (You can also buy elevators that move faster, extra characters, and special costumes).

It won't impress anyone who dismissed Tiny Tower as a pointless time waster, then. But if you were taken in by NimbleBit's skyscraper sim, you'll find a lot to like. And if you like Star Wars, the game's loving references to the franchise - from Hoth-themed ice cream shops to tiny pixelated wookies - will make it worth the download. 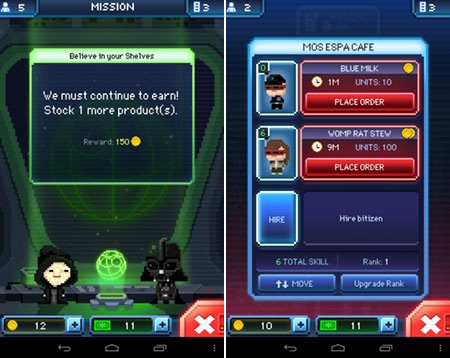 Tiny Death Star will be released on iPhone, iPad, and Android later this year.

Note: This hands-on preview is based on a game in 'soft launch', so any prices and mechanics are subject to change before the game's worldwide release date.
Next Up :
The best new mobile game of the week: Rocket League Sideswipe - 3 December 2021