Star Wars: Galaxy of Heroes - There are some pretty unsung heroes here 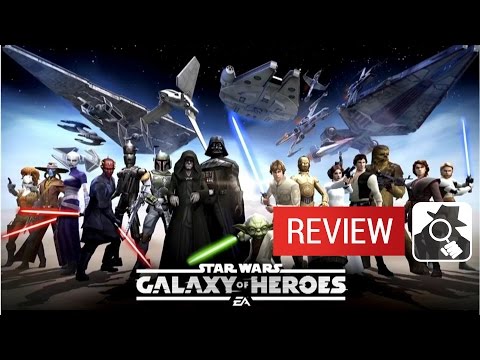 Subscribe to Pocket Gamer on
That's a nice wookie

Why thank you. It's Chewbacca from Attack of the Clones. He has a bowcaster and everything. And a move that makes everyone want to shoot him in the face.

Is he fighting alongside a Jawa and a Jedi?

He is. This is Star Wars: Galaxy of Heroes, a pared down free to play RPG that sees you building a team of some of the most famous characters from that galaxy far, far away.

Er, you've got a generic clone trooper in your team

Well, yes. It's actually quite difficult to get anyone famous if you're not willing to shell out or grind. And you'd best be willing to do one of those things if you want to get anything out of the game.

Okay, so what do you actually do?

Like I said, it's a pared down RPG. You spend pretty much all of your time fighting across various iconic locations from the Star Wars universe. I smashed Grand Moff Tarkin's face in with a lightsabre, and shot some stormtroopers on Endor with a laser machine gun.

That sounds pretty good. Do you have much control?

There's more here than in your usual battler. You can choose which moves to use, and there's a level of tactics here as well. Deciding which enemy to attack, when to use your special powers, and who you should set as the leader of your party.

Quite a lot yes. You can attach various upgrades to your characters, but really the focus of the game is making them stronger. You earn training droids as you play through the levels, then spend these and one of the in-game currencies to give your characters more power.

Nope, the levelling system is actually pretty complex. Each character has a star-rating as well. The more stars, the better. You can up the stars by spending shards, which you collect by replaying levels in hard mode.

Yup. Your gear level can be upgraded once you've got a piece attached to every slot. That gets rid of the gear, but gives you access to better equipment. Some pieces of kit require your character to be a certain level, and there's crafting as well.

How do I even get new characters?

Again, there are lots of ways. Some can only be unlocked by playing the multiplayer mode. Others you can get in card packs, some of them appear when you've gathered enough shards.

I need a lay down after all of that

Seriously. The core fighting aspect of the game is pretty solid though, and while it does take a bit of time to get your head around the finer points of the upgrade system, once it clicks it's reasonably easy to understand.

So would you recommend it?

I guess so. If you like your games to have a little depth, then you should probably give it a miss. But if you don't mind some grind, an energy system, and a combat mechanic that you can often take your eyes off, or if you just like Star Wars, it's probably worth go.

Star Wars: Galaxy of Heroes - There are some pretty unsung heroes here

A simple RPG wrapped in a pretty complex free to play system, Star Wars: Galaxy of Heroes is fun, but there's not that much to it
Next Up :
Nacon MG-X Pro Mobile Controller review - "A practically perfect mobile gaming controller"