Despite the best efforts of J.J. Abrams, Star Trek permanently seems to be flying in the shadow of another, somewhat larger, US sci-fi brand.

It’s a situation reflected in the number of Star Wars mobile games released over the years, and their success. While EA’s Galaxy of Heroes continues high in the top grossing charts, the only Star Trek game of note - Disruptor Beam’s Timelines - struggles to break into the top 200.

That situation may be about to change however with the release of Scopely’s Star Trek: Fleet Command.

Sure, the game can’t boast same level of popular appeal but in terms of design, engagement and monetisation, it’s doing some pretty interesting things.

As broadly described, Fleet Command is a 4X mobile strategy game. But, please, come back…. It’s not one of those hardcore, over-monetised 4X games such as Game of War or Kings of Avalon.

For one thing, the game’s monetisation is very different from other 4X games in the sense that its store is based around resource bundles priced at $5 rather than the usual up to $99.99 hard currency offerings of other F2P mobile games.

Instead, Fleet Command takes the heavy metagame of such titles, which sees you waiting while you level up buildings and complete research, and combines it with a more accessible and flexible mission-based progression system, and a strong role-playing element. 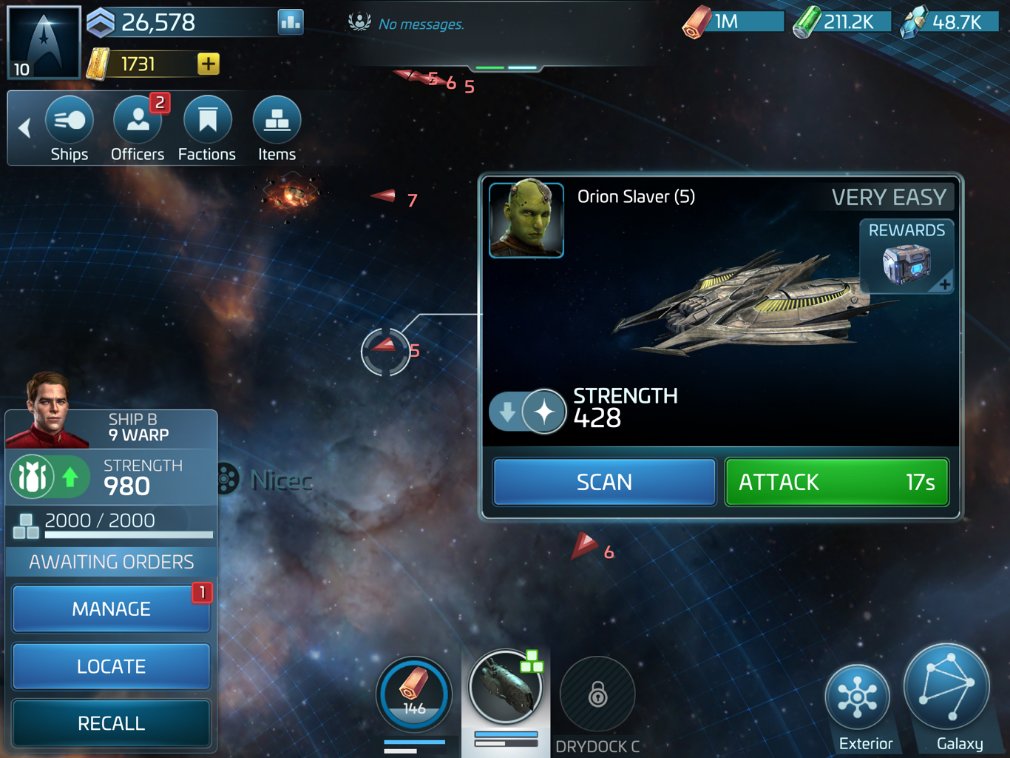 Whether or not you’re into Star Trek (as it happens, I’m not), it’s this RPG component that provides Fleet Command with one of its most engaging features. Taking its visual cues from the recent movie reboots (it follows the Kelvin Timeline), you get to collect and upgrade the likes of Kirk, Spock, McCoy, Scotty, Sulu, Uhura etc, equipping them to power up your ships, of which you can have up to three in operation at any point.

In this way while waiting for your buildings and research tasks to time out, you can also be flying around the Galaxy fulfilling missions, or grinding from the shards you need to level up your favourite characters. There’s always plenty to be doing.

And that’s before you get stuck into the 24/7 beat that is supporting the members of your Alliance with resources and other help.

Starting at the bottom

But, perhaps, the most impressive part of Star Trek: Fleet Command is how it places you within a large, living universe.

You start off with your own little base but as you level up, build more ships and start exploring, so the game’s content and context opens up too.

Certainly, this can be confusing in the early stages, as you come across much more powerful friends and foes and sometimes struggle just to find the places you need to go. As with buildings and research, you also have to wait around while your ships actually warp to new locations.

But when combined with branching missions that let you ally yourself with (or annoy) the Klingons, Romulans or Federation, you really get the feeling you’re a very small fish who’s growing more powerful in an enormous star system full of threats and opportunities.

Similarly, thanks to its generous reward structure, which see you gaining resources and loot boxes for almost every action you complete, even on a minor moment-by-moment basis, Star Trek: Fleet Command is a feelgood experience.

How well this will scale over the coming weeks and months is hard to predict, of course. But in its initial incarnation, Fleet Command that most rare of games: a deep mobile MMOG that combines its licence, metagame and gameplay in a thoroughly enjoyable and engaging manner.

Star Trek: Fleet Command is a well designed and deeply immersive experience.
Next Up :
Netflix Into the Breach review - "The strategy roguelike stays advanced on a new platform"