The clicker is an odd beast of a genre. At its core, it can seem like an ephemeral thrill - tap, tap, tapping away, making numbers go up higher and higher. And that's about it.

But if you play the more interesting entries in the genre, such as the popular A Dark Room, Cookie Clicker, or Candy Box, you may see that the appeal isn't the numbers going up, but the why and the how.

The ever increasing amounts are only a means to an end, like surreal new items or secret game mechanics unlocking, or a story unfolding.

SpacePlan understands this. While the gameplay is what you'd expect from a clicker, the surrounded mould makes for a uniquely enjoyable and humorous galactic journey.

If you were to judge SpacePlan purely at a gameplay level, you might be disappointed. The game is a clicker through and through, and that means tapping on the screen countless times.

You're gathering resources in order to unlock progressively more powerful tools, which in turn increase your resource gathering capabilities.

SpacePlan's resource is wattage, built up by the satellites and probes circling the solar system. More watts let you unlock potato-powered technology, from the humble "Spudnik" to the "Probetato". 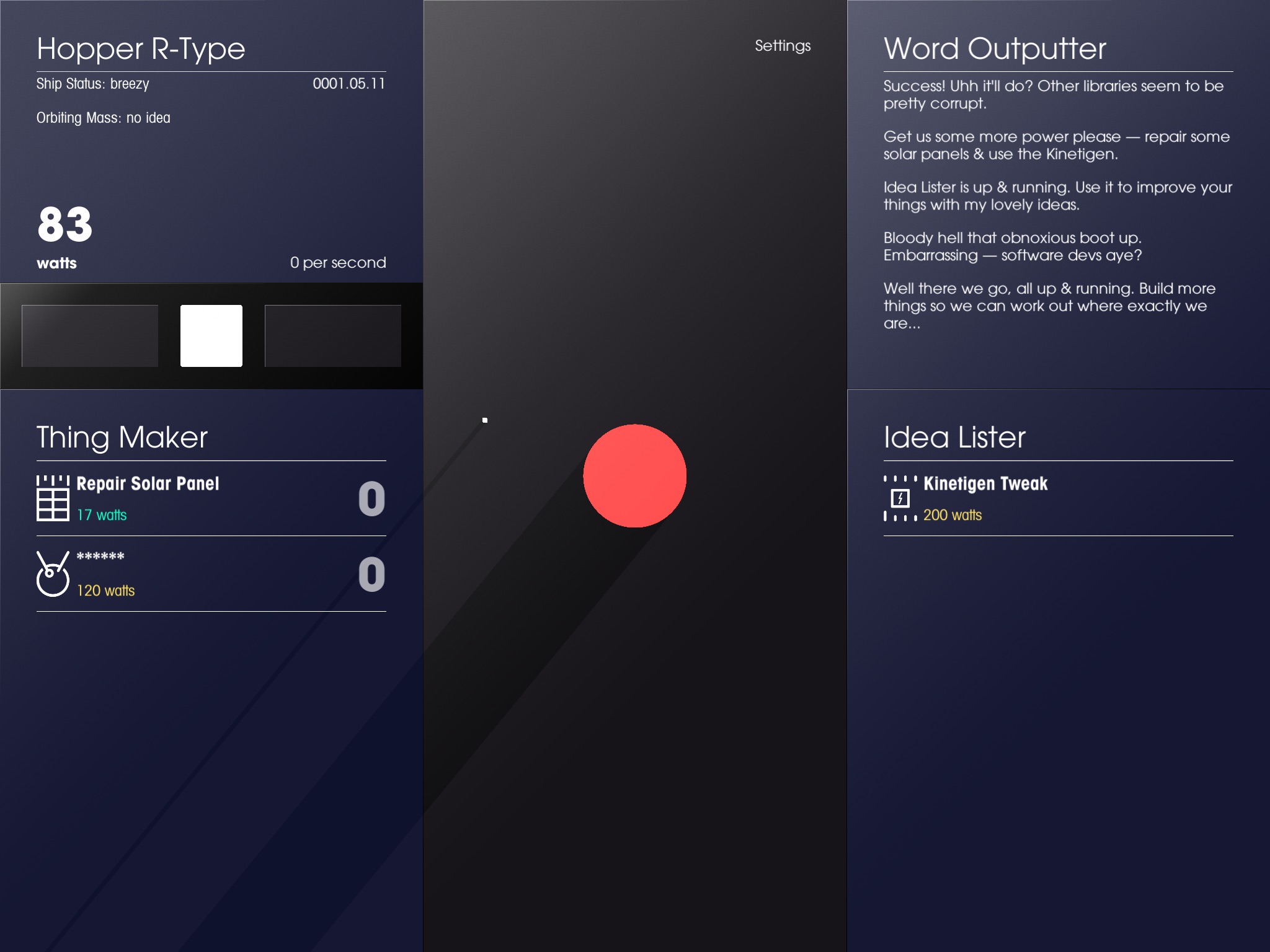 Tapping and swiping is how you interact with SpacePlan.You're tapping on the screen to add to your wattage total, tapping on items to unlock them and then create more, or swiping between screens of messages, the solar system, and unlocks.

It's fair to say that this isn't the most mechanically interesting experience on the App Store.

However, like the best clickers, SpacePlan is more than just its tap-heavy gameplay. The real draw of SpacePlan is threefold - its charmingly silly narrative, its minimalist style, and its gradual introduction of new elements and technology to unlock.

Beginning with a single satellite, your arsenal grows to landing probes, massive orbiting spudguns, gargantuan tater towers, and planet-pushing rocket boosters, all made in your quest to uncover the truth behind the Earth's demise.

Much like how Lifeline and other incremental narrative games spread out their narrative snippets, SpacePlan tells its tale in sync with your unlocks and actions.

Early in the game, you need to launch probes onto the rust-red Earth to study its surface, but a thick atmosphere destroys each probe during the descent. 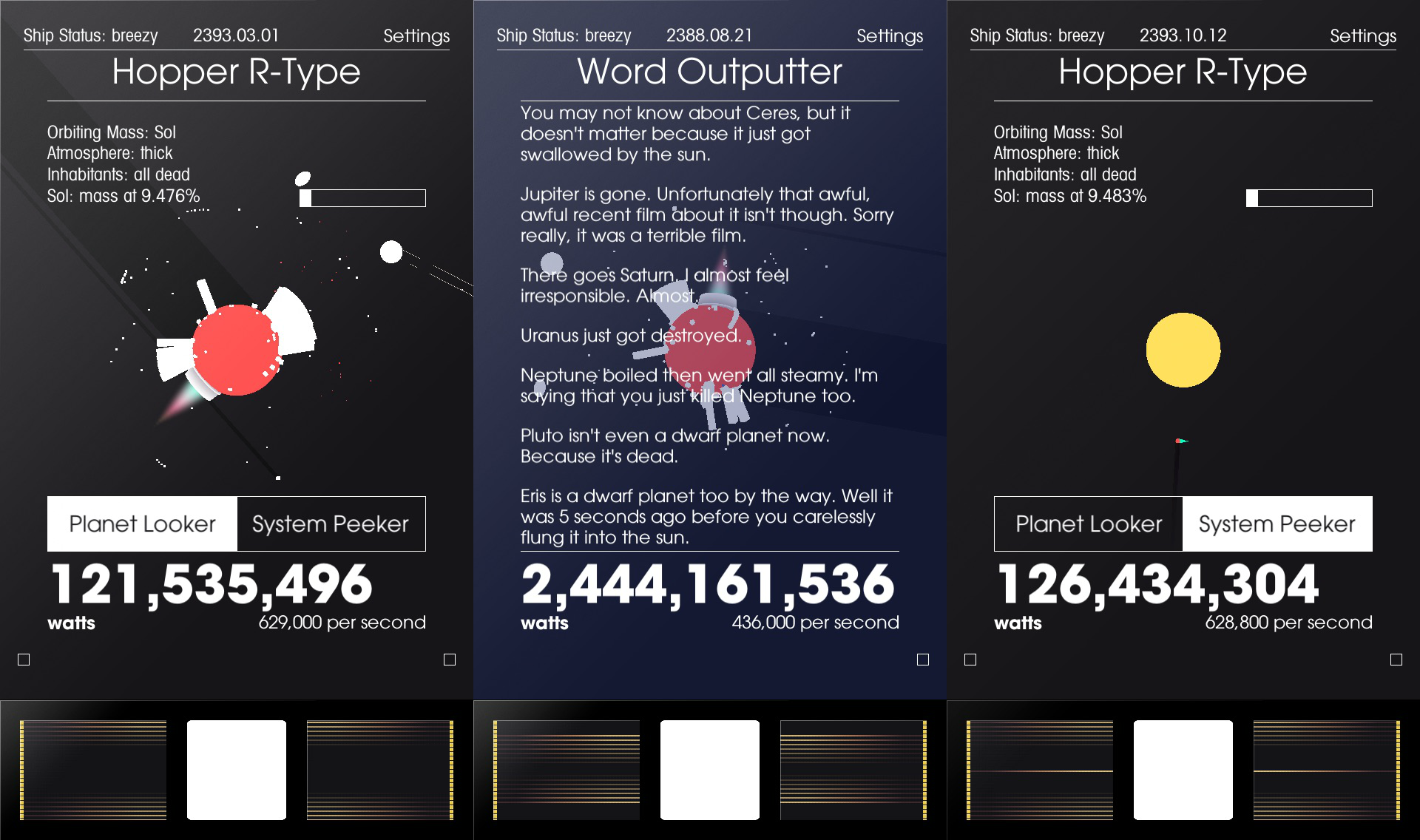 Suddenly your tapping and growing wattage has meaning - you need to unlock an improved probe that can penetrate the atmosphere.

SpacePlan is rife with this narrative context that imbues what its idle play with purpose. Guided by a snarky AI, your actions receive comments and insight from your digital companion, introducing objectives to achieve and sci-fi questions to mull over.

Soon your perspective expands from a single planet to the entire solar system, and the story grows in scope and absurdity as well.

Time travel even gets involved at one point, but if you're interested in SpacePlan, it's best to experience its story and reveals at the game's pace.

SpacePlan isn't a very long game - in fact you'll probably spend time with your phone idling to allow resources to accumulate - nor is it mechanically complex in any way.

But its charming and humorous narrative framing gives its simple gameplay a purpose that drives one to see through to its enigmatic end.

[Update] Devolver's SpacePlan is a wacky hybrid of space adventure and clicker, coming to iOS and Android next week