No, I didn't make that up

What's cooler than a Viking?

A smooth-talking lounge lizard Viking with a funky groove, a towering afro, and a burning desire to get into the party at the end of the world. Of course.

And that's exactly what you get to play as in Airtight Games's new Ouya-exclusive dungeon-crawler Soul Fjord.

In a world in which Norse mythology has been blended with - yes - the '70s funk and disco movements, you play as Magnus Jones, a badass warrior who has died but not quite got to Valhalla (known in the biz as the hottest nightspot in the underworld). 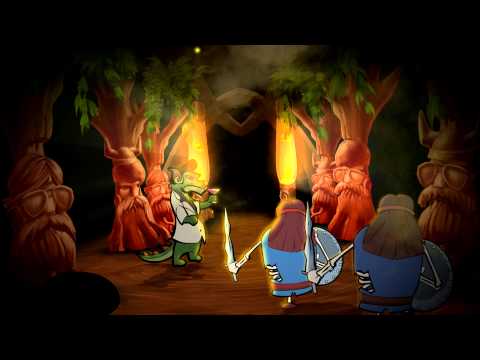 Rightly aggrieved that his name's not on the guest list, Magnus has to make his way up the randomly generated dungeons of Yggdrasil, a.k.a. the World Tree.

On his journey, Magnus will have to battle a series of bad guys, including Disco Wizards and Smooth Trolls, using rhythm-infused combat.

It's fair to say the team at Airtight Games has a decent pedigree when it comes to off-the-wall ideas, thanks - in part - to the presence of Kim Swift, who was the lead on, and level designer of, mind-bending first-person puzzler Portal.

Soul Fjord, meanwhile, is one party to which we're desperate to get invited. We'll let you know when the music begins.

Eurogamer
Next Up :
Tomb Raider Reloaded is an action-packed roguelike coming to iOS, Android and Netflix on February 14th, now open for pre-registration