There are only so many ways you can say "it's nearly Christmas", and I've used all of them at this point. So let's just cut right to the chase, shall we?

If you've been hiding under a rock for the past two weeks, you'll have missed that Pocket Gamer (that's us) has been giving away codes for the biggest premium mobile games 2016 had to offer. It's our way of doing an advent calendar, basically.

We started on December 1st, and will continue to give away games right up until Christmas Day itself. 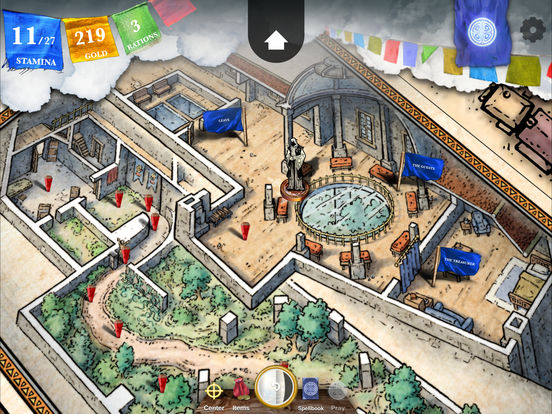 Why yes, yes it is. But in this instance, it actually refers to an excellent gamebook series developed by inkle - themselves the absolute masters in digital gamebooks.

As the name suggests, this is the fourth and final act of the saga in which your hero finally reaches Mampang, the last destination on his quest to get his hands on the Crown of Kings.

But you'll get no spoilers from us here - you'll have to play it for yourself to see what happens. We can promise you that you'll see plenty of combat, make difficult decisions, and meat a bunch of interesting characters as you see your journey coming to an end.

And we thoroughly recommended it at review, giving it a coveted Gold Award and describing it as: "A fitting and fantastic end to one of the best gamebook adventures on mobile. Make sure you pick it up".

Not so fast! Before you even stand a chance at grabbing a free code for Sorcery! Part 4, you'll have to join the App Army here.

After that, simply enter your name as it appears on Facebook in the comments, along with your preference between iOS and Android. If you're one of the lucky ones, you'll receive your code within one working day and be announced on the official App Army Facebook page.

And that's all there is to it. Have a merry Christmas all, and enjoy the game if you win.

The App Army is Pocket Gamer's very own community of mobile game experts. Each week, we provide them with a bunch of free codes and early access to the hottest upcoming games so they can provide their thoughts in features like this. We also host regular community-driven events with them in mind like tournaments, giveaways, and multiplayer evenings. To join, simply follow this link to the page on Facebook and request access. We'll get you in right away!
Next Up :
Omega Strikers Asher best builds and tips