SINoALICE Yoko Taro interview: "The world we live in is full of despair, your dreams will never come true, all you can do is give up"

Ahead of SINoAlice's global launch, I interviewed publisher Square Enix's Yoshinari Fujimoto, developer Pokelabo's Shogo Maeda, and Creative Director Yoko Taro to discuss the fantastical RPG, its influences, and what exactly drew Taro to the world of mobile gaming.

If you've followed this one prior to release, you'll know that it's partly sold itself on Taro's name and reputation as a visionary auteur. I start by asking him about his role as the game's Creative Director and what it entails. He says, "I act as a role in which I'm an old man sitting at the back of the room, not doing much work and looking important."

Taro rose to popularity with console games such as the Drakengard and NieR series, so I was curious to hear what exactly drew him and the team to create an RPG experience designed specifically for mobile. Fujimoto tells me that "smartphones are a tool that is embedded deeply in everyone's lives, so the greatest appeal is that there are a lot more chances for people to interact with the title." Taro follows that up with, "while I'm playing mobile games, I don't have to look at Twitter."

With NieR: Automata being one of the most widely discussed games of the past decade, I had to ask whether any recent mobile releases have stood out to him as being especially interesting or boundary-pushing. He replies, "I don't have any recently. Before, there used to be ambitious inventions to squander as much money as possible from players, like gacha and comp gacha, but things are pretty tame in the industry nowadays, which is pretty boring. I want mobile game companies to develop more systems that are maliciously greedy."

Many display some resentment towards mobile games in the West, especially free-to-play releases, and there still seems to be an assumed divide between mobile gamers and those who play on PC or consoles. I ask him what would need to change for mobile games to be viewed as equal to those on other platforms, to which he replies, "what's the problem with mobile games being looked down upon? In movies or any other story, someone who is destined to be a hero is always weak and looked down upon by his peers at first." 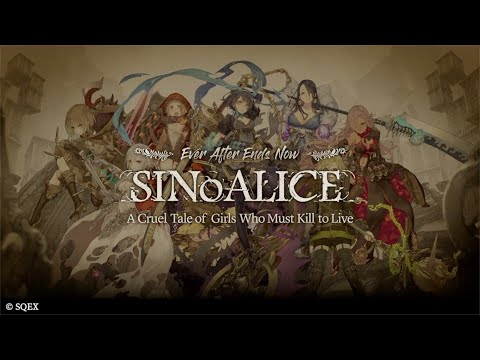 Having launched first in Japan back in 2017, SINoALICE's global release has been a long time coming. Maeda tells me that the game has progressed significantly since arriving on the scene, now onto its fifth campaign act and having hosted collaborations with several big-name IPs.

The first such crossover to appear in the global version will be NieR: Automata x SINoALICE, which will then be followed by a NieR: RepliCant event in August. "There are characters from a game called NieR. They show up, fight in the world of SINoALICE. Then they go home. It's sort of like a travel show," says Taro.

The game itself pulls from a range of classic fairy tales for its collectable roster and storyline, which is an interesting premise that seems very much in Taro's wheelhouse. "As the title says, I think Alice in Wonderland has had some influence. I think the fact that people will forgive a nonsense story as long as there's a cute girl in it is a wonderful discovery," he says. "The story doesn't affect the game for the most part. We made it so you don't even have to read it at all. In-app purchases and Square Enix stock prices are important themes."

Maeda explains that the campaign plays out in an omnibus format for each character. After a battle, you'll get a little bit of story and background info on your chosen hero. Once you've progressed to a certain point, you'll unlock guilds and be offered the chance to enter into the game's coliseum mode. This is a combat-heavy event that is held daily and seems to be one of SINoALICE's major draws.

With the game now out globally, I ask if there are any genres in particular that Taro would like to explore next. He replies, "I kept telling people I want to make a vertical scroller shooting game, but there are no signs of it happening, so I gave up. I want to tell young people this: The world we live in is full of despair, your dreams will never come true, all you can do is give up."

Searching for some high-quality RPGs? Here are 25 of the very best for iPhone & iPad
Next Up :
Win a Alchemy Stars prize pack containing Luamber, Prism, Colossus Patch, and more in our latest giveaway