Square Enix published and Pokelabo developed gacha action RPG SINoALICE is no stranger to collaborations, and the news for the latest planned crossover has finally dropped. This time around, you’ll be able to roll for characters from the popular gambling-themed anime series Kakegurui XX.

If you’re not familiar, Kakegurui is an anime that features a lot of high-stakes gambling, some very pretty character designs, and a tiny bit of action thrown in there as well. This collaboration effort specifically will allow you to nab yourself the heroine from the series, Yumeko Jabami, as well as the Little Match Girl character with a new version that sports the same outfit the students in Kakegurui wear.

Of course, it’s not all just characters. This event will also feature a new, fully original story that sees the cast of SINoALICE enter the world of Kakegurui and experience the thrilling gambling themed battles that the anime is known for. To receive that Little Match Girl new version, you’ll have to fully clear this event and then you’ll have it unlocked for future use. 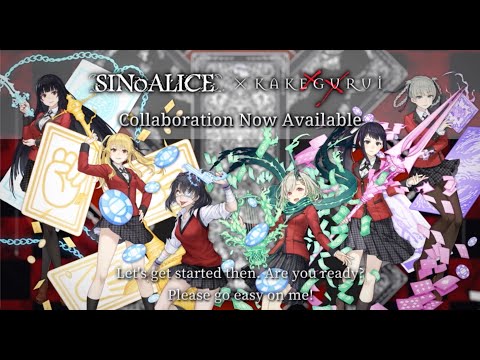 As for Yumeko, all you have to do is log in during the event period, which will run from now until May 10th. But that’s not all! There will also be a new Grimoire, this game’s version of gacha banners, to roll on that features another three characters from the anime as well! To be precise, the three up for grabs are Sayaki Igarashi as a Paladin classed character, Kirari Momobami who will be a Sorcerer, and Wager as a special ultra-rare class called The Second Hand.

So, if you’re a fan of Kakegurui or just simply need some new characters to spice up your SINoALICE party composition, now’s the time to give it a shot. If you’re looking to do so, you can find SinoAlice for free on both Google Play and the App Store.